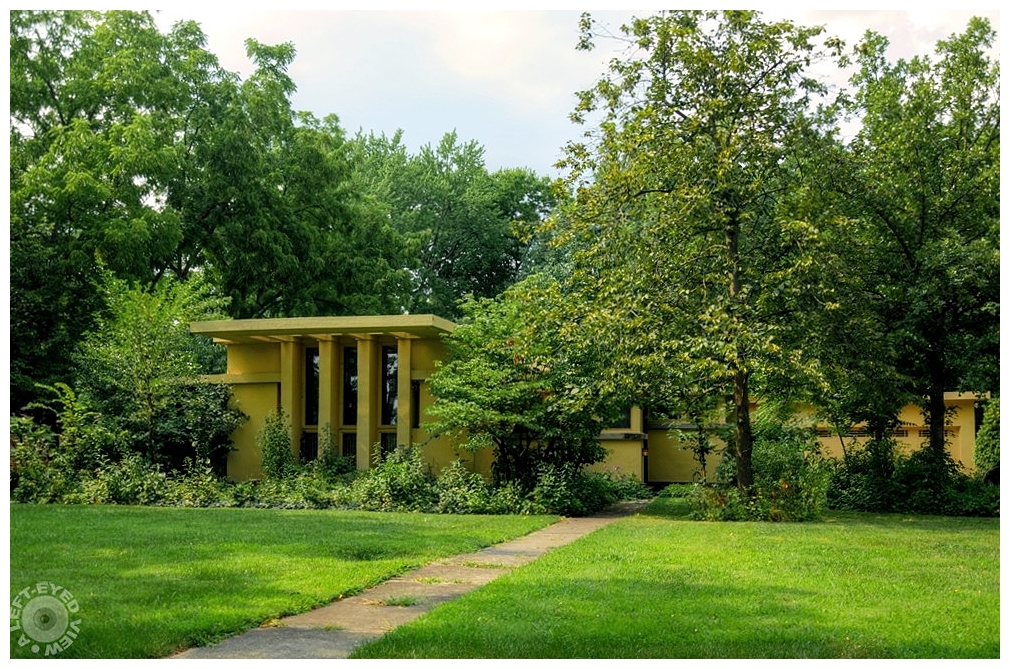 Posted by Steven (Chicagoland, United States) on 8 October 2018 in Architecture and Portfolio.

One of Frank Lloyd Wright’s most interesting homes wasn’t originally designed to be a home at all—it was a schoolhouse.

In 1908, Frank Lloyd Wright was commissioned to build an estate for Avery Coonley and Queene Ferry Coonley in suburban Riverside, Illinois. After the mansion was completed in 1912, the couple tapped the architect to design a schoolhouse nearby.

The school was only used as such until 1919 when it became a family residence. Wright‘s assistant, William Drummond, was brought in to convert the property on Fairbank Road into a home. The Cottage School, later renamed the Avery Coonley School, moved to Downers Grove and is still open today.

Sometimes referred to as the Avery Coonley Playhouse, the two-bedroom structure is remarkable for a number of reasons. It served as a testing ground for many concepts Wright would later use in his Usonia homes such as flat, cantilevered roofs and lots of built-in shelving.

Another special feature are the art glass windows which depict a colorful, almost confetti-like design. It’s the first instance where Wright uses circles—and the only time he incorporated an American flag—into his traditionally straight line aesthetic. The original triptych window from the schoolhouse is on display at the Art Institute of Chicago, but the home has a museum-quality replica.

Owners Susan Shipper-Smith and Ted Smith have worked on restoring the home since 1980. When the couple bought the property, the flooring was cracked and wood was painted over. They made preservation a priority making sure to restore, and sometimes recreate, its architectural details.

Some original windows were saved and the cracked-beyond-repair wood flooring was redone in an authentic fashion. A new roof was installed in 2012 and the home’s electrical, plumbing, and heating is all new too.

The cross-shaped home also comes with two separate structures built at different times now used as garages on the half-acre site. The fireplace at one end of the home is on a raised platform which Coonley used as a stage for school performances and behind nearby wooden panels is the kitchen.

While the structure was built as a school, it did have a kitchen back then. Kids helped prepare lunch at the schoolhouse, so the space was designed to accommodate them. When a renovation does take place, some counters will need a lift if the new owners are interested in a more adult-friendly layout.

Beautiful symphony of greens. A nice place to the students

BEAUTIFUL TO SEE ALL THIS GREEN

The students must be happy

A superb image of this building. Your information is really interesting on the history and owners of the Schoolhouse.

Quite a history! I love how you composed this to allow the greenery to frame the interesting architecture

It is beautifully designed to be one with its surroundings. An excellent presentation here in both word and photo.

what a nice place to go to school it must have been. Lovely capture and colour palette

A fascinating history to accompany this handsome house.

I would like to see what's inside this "school" now.

This is a beautiful home. It has quite an interesting history. I am glad that the present owners have taken care to renovate and preserve it.

So nice. I thought it was his even before reading.

You can probably predict what I'm going to say by now. I love all of that green!

I do love FLW... an interesting color choice for this building.

it must be a nice place where the children study, surrounded by nature which is pretty

No doubt Frank Lloyd Wright was a talented architect. Their works are wonderful.

Another imaginative building of such an icon as Frank Lloyd Wright. Beautiful image.

Great that this house is being renovated -- what an enduring project they have taken on, but for a great cause. Love to see that houses are renovated with preservation in mind. Thanks for the lovely picture and also the information you provided.