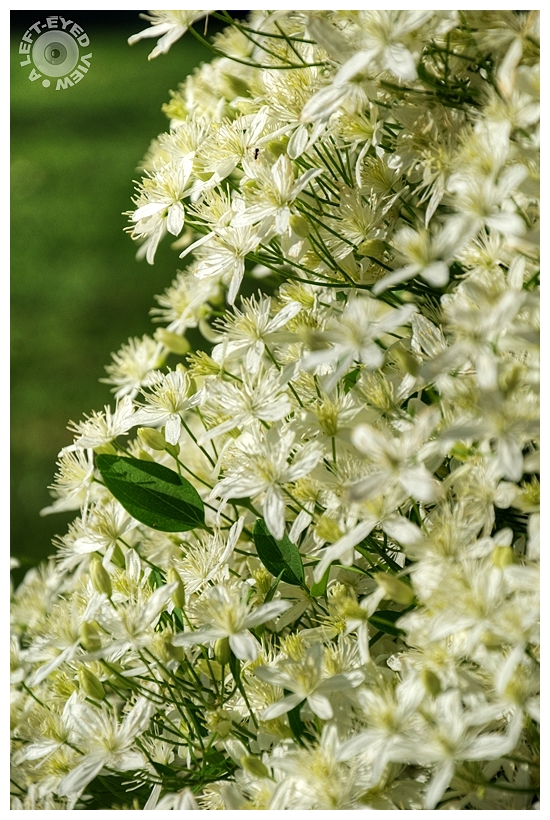 Posted by Steven (Chicagoland, United States) on 24 October 2018 in Plant & Nature and Portfolio.

Sweet autumn clematis is a plant in the buttercup family, Ranunculaceae. It is native to countries in northeastern Asia (China, Japan, Korea, Mongolia, Russia (Siberia), Taiwan). It was introduced into the United States in the late 1800s as an ornamental garden plant, and has naturalized in many of the eastern states. It is considered an invasive plant in New Jersey, South Carolina and some other eastern states.

Sweet autumn clematis is a vine with opposite, pinnately compound leaves, on climbing stems. The flowers are white, borne in fall.[2] The blooms are nicely fragrant and visited by bees. In late fall the fertilized flowers become fruit (seed) clusters of 5-6 fruits connected at the heads and each having a long white tail. As these dry, the color of the fruits fade and the tail becomes feather-like. In the spring the fruits detach and are dispersed by wind.

a wonderful and delicate picture !
5*

True, it is sweeet

YAY for anything that attracts the bees, Steven. What a beautiful plant for humans, too.

Yet the bloom is synonymous with spring, as the impression felt on this photo

delightful details in green and white, that's such a beautiful photo of the sweet autumn clematis!

what a beautiful late flowering plant you capture here. There must be space for one in our garden

Excellent look at the sweet autumn. Mine has just died off. A great plant in any garden. 5*

What a beautiful bouquet of these lovely flowers. Excellent presentation. And interesting information. :)

What a lovely little white clematis, I do not know this species

Wonderful details and nuances of light.

What a beautiful close up. I like the warm light and the fine details.

Photo very well done. The composition and level of detail are perfect. And the fact that it's practically monochrome is a bonus.

A lovely image of this pretty plant.

He he... Just got back from a mini break from Old Jersey. ;)

About this plant, we have something similar in England. Though, it's native here, commonly known as "old man's beard".

What a wonderful image, indeed... I think we used to see them in Easton, PA when we lived there.
What a Grest shot, Steven!!

This is a lovely one.

This plant is thick with lovely blossoms.

Such a beautiful plant and how nice that it blooms in the fall when everything else is mostly gone. I have never heard of it before. Gorgeous flowers!

Nicely captured, Steven... I, for one, always have trouble identifying plant species... :)