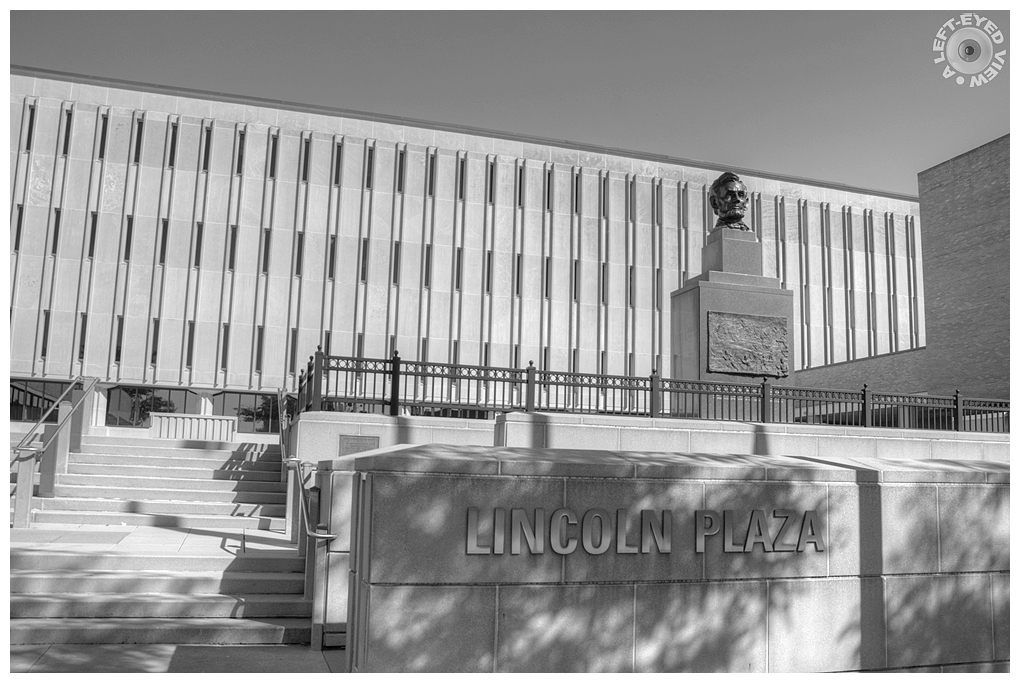 Posted by Steven (Chicagoland, United States) on 29 October 2018 in Cityscape & Urban and Portfolio.

A bust of Abraham Lincoln in the plaza at the Lake County Courthouse. When the statue was finally completed, two bas relief friezes were mounted on the pedestal. One frieze commemorates a visit Lincoln made to Waukegan in 1860, and the other acknowledges the city's involvement in the Civil War.

The friezes were created by Lily Tolpo, wife of the late Carl Tolpo. Her husband created the bust in 1968, but died in 1976 before the friezes were completed. He left his sketches behind, though. "I inherited all of his research, so it made it a lot easier to go ahead and finish it."

A painter, sculptor, portraitist and designer, Lily Tolpo owned a gallery in Stockton, Illinois, about 140 miles from Chicago. She had always wanted to complete her husband's work at the courthouse. "It brings this to a closure," Tolpo said of the addition of the friezes. "This has been open for so long and this bare, huge pedestal has been crying out for something."

The frieze on the east side of the pedestal at the Lake County Courthouse depicts a campaign speech Lincoln gave in Waukegan on April 2, 1860. During the speech, a fire broke out in the Case Warehouse on the "flats" along Lake Michigan. Lincoln told the crowd that the fire was more important than his speech. "I think there is a fire," he said. "You had better go and try to save the property. I can come another time and speak to you." Lincoln never returned to Waukegan, but legend has it that he spent the rest of that spring day hauling buckets of water to help put out the blaze.

The western frieze depicts a Civil War battle scene and recalls the day of April 16, 1861, when Waukegan Mayor David Ballentine called a meeting in response to Lincoln's request for soldiers to fight in the Civil War, which had broken out at Ft. Sumter only four days before. Eighty-four Waukegan men left a week later to join regiments in Chicago and New York.

love, love the dappled light falling across the patterns

Any President who was/is thinking of someone else besides himself deserves to have such a bust in his memory, Steven!

Nice light and tones with an excellent compo

Beautiful equal architecture structures in this black and white photo

I like the dappled light and the graphic lines of this building.

This light is superb and so ideal for a black and white impact such as this. Great pic.

A beautiful image of this project with such an interesting history. It's good that Lily Tolpo was able to complete the job.

Nice POV with the placement of the bust above the name.

The shadows allowed to give more prominence to the bust.
And the rule of thirds was very well applied.

What an amazing story, to accompany this image, Steven. Your work is always so complete in every dense of the world!! Just Fantastic!!! And Thank You for this post ;-)

Such an interesting history. The bust is magnificent. I like the shadows in the foreground.

Terrific information about this... I love the bust of Lincoln - and I love your processing. The B&W really brings out details!

The black and white works very well in this image. I enjoyed the information.

There's a small bust of Lincoln at the Royal Exchange in central London.
But we do have a proper statue of Lincoln at Parliament Square overlooking Big Ben.