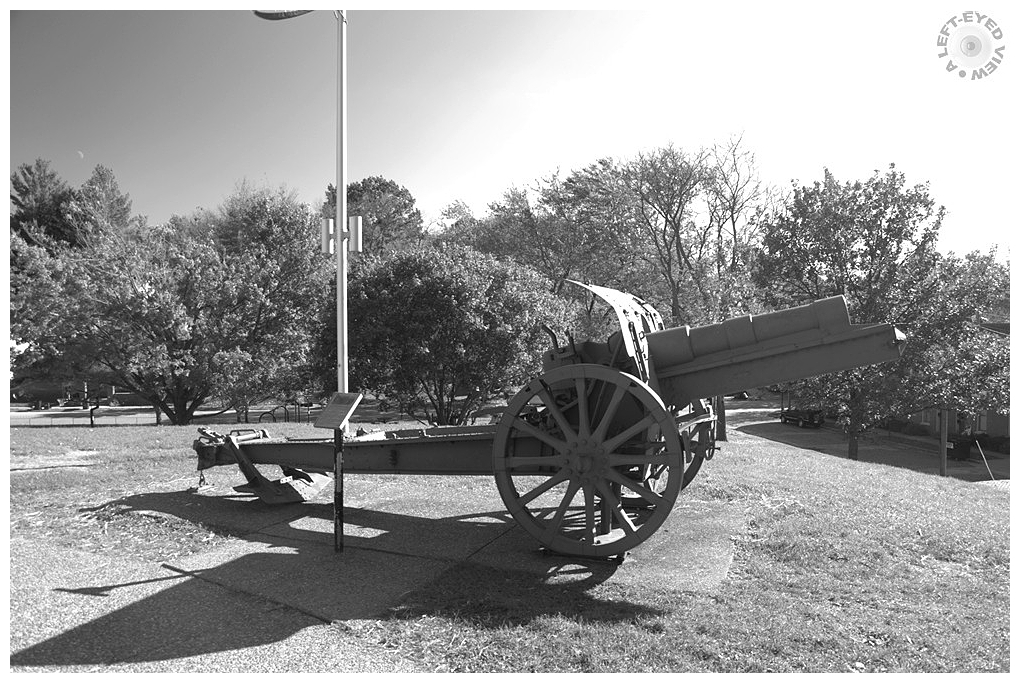 Posted by Steven (Chicagoland, United States) on 19 December 2018 in Documentary & Street and Portfolio.

During World War I, the Krupp heavy howitzer became the workhorse of German field artillery. Capable of delivering a ninety-pound projectile containing high explosive or poison gas, it was considered by the German High Command their "principal gun of battle". Literally thousands were captured by the Allies by the end of the conflict.

Galena, like many other communities that sent their fair share of men to the war, pushed for a "souvenir" to complement the other guns displayed in Grant Park. The Galena Gazette suggested that a German "airship, submarine or some other memento would be very acceptable."

The local American Legion Post 193 petitioned their U.S. Congressman, John C. McKenzie, for such a memento. In 1924, he introduced legislation, which subsequently passed, to allot German war trophies to each state according to the number of mem they sent to the war. Illinois was entitled to "150 cannons and trench mortars, 220 vehicles, 4,722 German rifles, 672 machine guns and 3,294 bayonets and scabbards."

THe Gazette announced in August of 1925 that the American Legion Post had received word that "a large Howitzer cannon will soon be placed in Galena's beautiful park." The cannon, weighing 4,900 pounds, arrived in April the following year and was placed "in a commanding position on the brow of the hill." Here, it was proclaimed, the cannon would serve as a memorial to all the boys who "went West."

Rededicated in June of 2004, through the efforts of the Galena Foundation, City of Galena and friends of Galena history, it continues to commemorate all of those who served.

The standardgun of the German frontartillerie. Interesting, that this one (perhaps some more) exemplar survived in the USA. Well captured and informations.

A nice look at the Howitzer. There a a few of these on some of the bases I was stationed at in the UK. Krupp was a very important German company ans still is. A nice image Steven.

So much ingenuity invested in dealing death. A sobering sight, well documented both with picture and words

That is indeed a old one !

A great capture in sun and shadow . Thank you for the explanation .

A fine shot of this famous weapon. The history is very interesting,

The shadow reminds on the many fallen. The memory remains and we will always remember.
Good photo.

A fine presentation for this killing device. Excellent sunlight accents and detail.

well, haven't i lived a sheltered life in not knowing about the history here

Quite an impressive field gun. When my company rotated to the battalion firebase, in Vietnam, I spent nights in a bunker just below the 155mm howitzers. When they got fire missions in the middle of the night, as they often did, it would rattle your teeth. The mortars were farther away and much less noisy.

@Steve Rice: Thank you for sharing your personal connection. And thank you for your service!

If only governments and people everywhere invested the same amount of time and energy in making friends as they do in war, the possibilities of humanity would be endless.

Such an interesting history connected to this howitzer. It makes a nice tribute to those that served in World War I.

A piece of history for us to see in our time.

I am always amazed by the range these old weapons can achieve. Man makes efficient killing machines.

Now, I can say that I learned something new today.