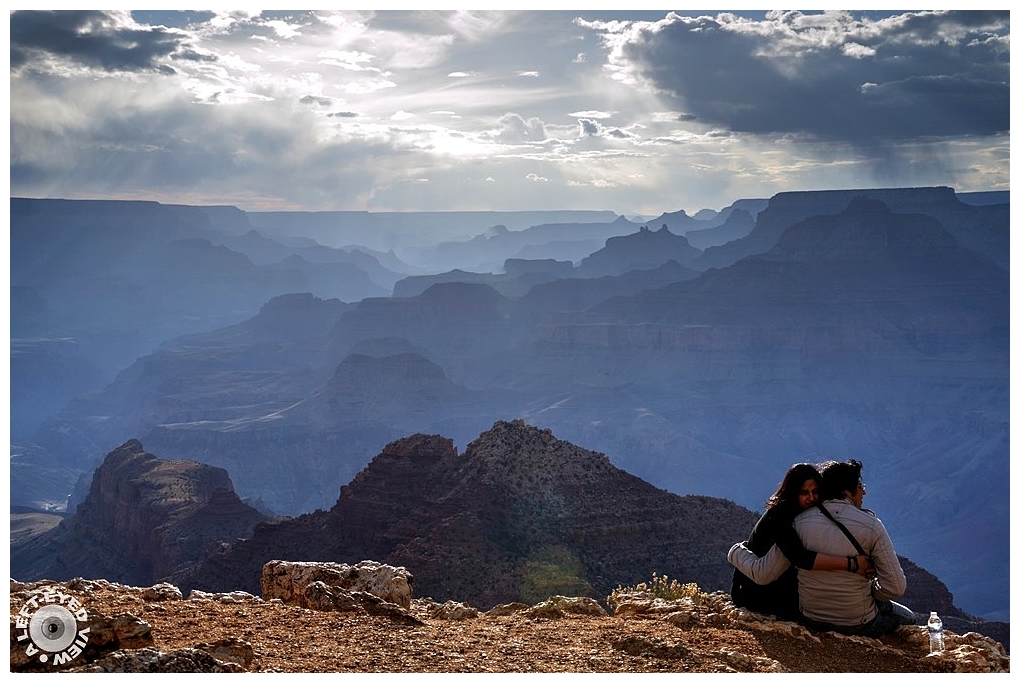 What Were They Thinking??!!

Posted by Steven (Chicagoland, United States) on 12 February 2019 in Landscape & Rural and Portfolio.

An unbelievable sighting while we were at the Indian Watchtower at Desert View was this couple sitting on the very rim of the Grand Canyon, where it was a long drop into the canyon. All it took was a wind, a sneeze, a rock crumbling or an unsuspecting person coming up from behind and startling them to lead to an unfortunate accident. I stayed far away from them!

Rather than taking this photo for its beauty, I took the photo as documentation if the couple ended up missing or worse.

I hope that the water bottle ended up in a trash receptacle. :-)

I love the different shots of the mountains and their beautiful soft blue color. Lovers are alone in the world and if they think of something, it is probably not the fact that hundreds of people will see them on your site. LOL!

Love has no thoughts.
I like the photo with the people on the mountain.
She have the holy world for her self.

I like the drawing these mountains make on the central plane of the image, followed by the flash of light that runs through the clouds in the background

Based on the picture, they dream of a common happy future

They are enjoying this fabulous view.

What a view for this lovers ! Beautiful layers, composition and atmosphere !

I don't know ! but they are happy ant it's the best ! You made a very nice picture too.

Wow, this is one of the most beautiful ST posts !
I agree to your behavior, you stayed far away from them.

A superb image Steven, with a warning to people who should know the dangers of sitting so close to the edge. Recently 2 people were killed doing this. 5*

More STupid perhaps but what a lovely backdrop you capture

Maybe dreaming of the beauty of these mountains. Wonderful !!

They love eachother.
Love has no thoughts, this is to enjoy together.
A fantastic photo.

a lovely image...beautiful mood...
But..
I hope you warned them not to sit there..instead of thinking " None of business" and walk away !

There are people who like to take risks ... and then accidents happen.
:-|
Fabulous framing. Excellent capture.

I am dizzy just looking at them ...A Fabulous photo !

Get lost you tiresome photographer!!! ;-) Wonderful composition and a stunning background!!

A great view for this couple. It would be restful to just enjoy this wonderful landscape.

Some people do careless and dangerous things. Happy Silly Tuesday!

Some people are nuts! It's a beautiful photograph though.

Impressive landscape that slowly moves away from the foreground that the couple... 5*****

when your site opened and revealed the splendor of your image, i was so taken by the feeling of tranquility that i didn't notice the couple until i read your narrative

This is a gorgeous image. I love the view of the canyon in the distance. Every year you hear about people falling to their deaths in Yosemite and the Grand Canyon. When I was at the Grand Canyon, a man was standing at the edge and his hat blew off of his head. He lunged forward to catch it and fell to his death. Even photographers in the group I was with would take chances and stand right at the edge for a better shot. Pretty scary.

It's a lovely and touching image. But your message is heard! I have sat on the rim of many canyons many times. And you're right, it can be quite precarious... I've always approached these ledges slowly, with great care and inspection. But the older I get, and the less sure I am of my reflexes and balance - the more likely I am to stay a foot back... :-)

the young think they are immortal

Thanks for contributing your story to Aminus3 Discover. It has been posted here