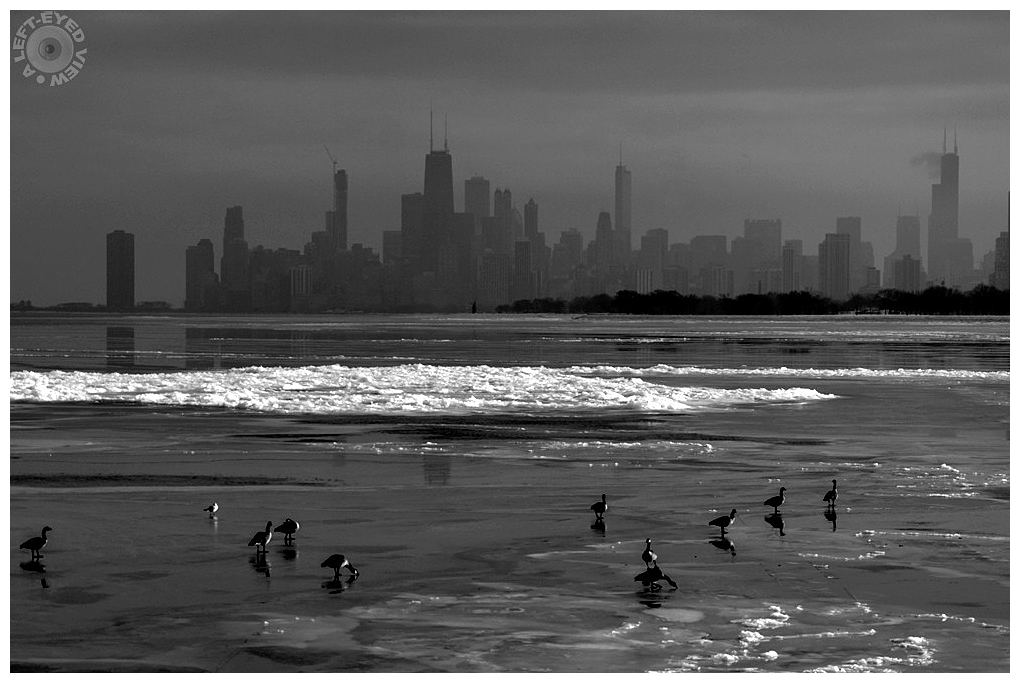 Posted by Steven (Chicagoland, United States) on 13 February 2019 in Landscape & Rural and Portfolio.

A view of the Chicago skyline as seen from Montrose Harbor.
This was taken a few days after Chicago experienced a near record cold temperature. Chicago was colder than many locales around the world known for its cold temperatures.

I didn't want to venture out with my camera during the cold weather for fear that it would lead to condensation building inside the camera itself.

The white amoebic form that you see in the middle of the photo are shards of ice that were paper thin and piled on top of each other, perhaps due to currents under the ice.

What a beautiful image of the Chicago skyline, Steven, especially with the snow/ice in the foreground. I lived in that windy city for a year way back in my 20s and know how cold it can get.

Current winters are full of surprises. It was a long time for us to snow and the frosts were tough. Now the air has slipped and, according to ennsuteidfen, the temperatures will rise many degrees above the nail. Right now there is a degree of frost and snow falling.

A powerful image with the layers of distance.

Brrrr…..the cold comes through the monitor by this frozen skylinen ;-0

Amazing image ! Nice combination of the buildings, the pilled paper ice and the birds !

What a beautiful image, good shot!
Nice day to you!

Excellent capture Steven. Cold can kill batteries too. My nikon got below freezing and it wrote the battery off

I like the light and the skyline. I live on the Delaware river. WHen we get extremely cold weather, ice chunks form on the river and pile up agains each other similar to this.

Excellent image Steven. A great look at the city over the water. 5*

A special and excellent skyline .
I feeling the cold from there .

The windy city became the frozen city. An excellent capture with the geese.

such beautiful composition, atmosphere & reflections!
A M A Z I N G !!!

Such a dramatic contrast between foreground and hulking skyline. A grand composition. 5 Stars !

This is a gorgeous view of the city skyline with the snow and the birds in the foreground. The black and white is fabulous! A wonderful composition!

an atmospheric picture, a fantastic view of the skyline with interesting light

A wonderful view that conveys an appealing mood. Excellent quality.

I bet they wish they had ice skates

Wonderful cold cityscape. I know water birds and ducks are equipped for the cold, but I hope they survived those extreme temperatures.

Wonderful view and a fine capture of the cold cityscape. :)

Luckily I do not have to go through extreme cold. But if I am given the choice of cold or heat, I choose the cold.
Beautiful view.

beautifully captured, I like the contrast nature and urban

It's a fantastic shot, Steven! Full of atmosphere! Well done!