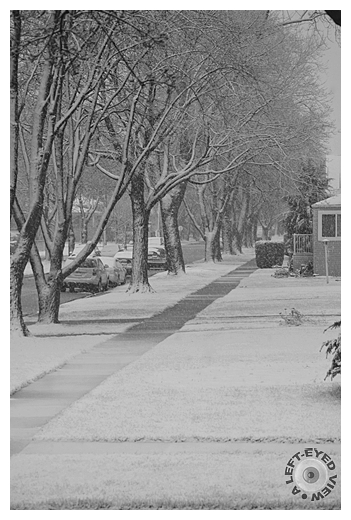 Posted by Steven (Chicagoland, United States) on 17 April 2019 in Cityscape & Urban and Portfolio.

Just when we thought Winter was behind us and Spring was well underway with daffodils and anemone blandas in bloom, Mother Nature decided to play a joke on us. This photo was taken only an hour into the start of the snowfall. By day's end, we received almost six inches of snow. Thankfully by Tuesday, it was just about gone.

Nice white perspective... Spring come back I am sure.

Brrr. April surprises in many ways

We had something similar but less severe . . daffodils with snowflakes !

Brrrrr...looks fresh. We had the same even some days ago here.

A beautiful atmosphere ! Yes, Mother Nature and Spring surprise us in France too ! so, we hope the return of beautiful days !

Strange weather for this time of the year Steven, but we get it now and again.

Just had a cold snap here too, though thankfully no snow. Still at least you got a nice image out of it :)

Ha ha... Winter is coming!
Anyway, I'm off to Germany for a mini break this Easter weekend.
See you next week.

Aw!! Nature is unpredictable !!! Hope the snow melts away soon :)))

What an unwelcome surprise! Your view is quite lovely though.

Given these and other situations, I do not understand how there are people who do not believe in climate change.
:-(

I like the vertical format of this winter related picture. Very well done

simple composition that gets your point across

Somebody was playing a cruel joke! I am glad that it melted quickly! Spring is always full of surprises!

The weather has been very strange this season. Imagine, some people in high places want to burn more coal.

A beautiful scene. And a fine shot. Love this. :)

oh, wow, this reminds me of an old film photo

Such is the nature of nature... and a spring storm! I'm glad it was "only" six inches!

Oh ...I like this image !!
Thank you so much for your visits while I was away .

This is really quite striking in black and white.