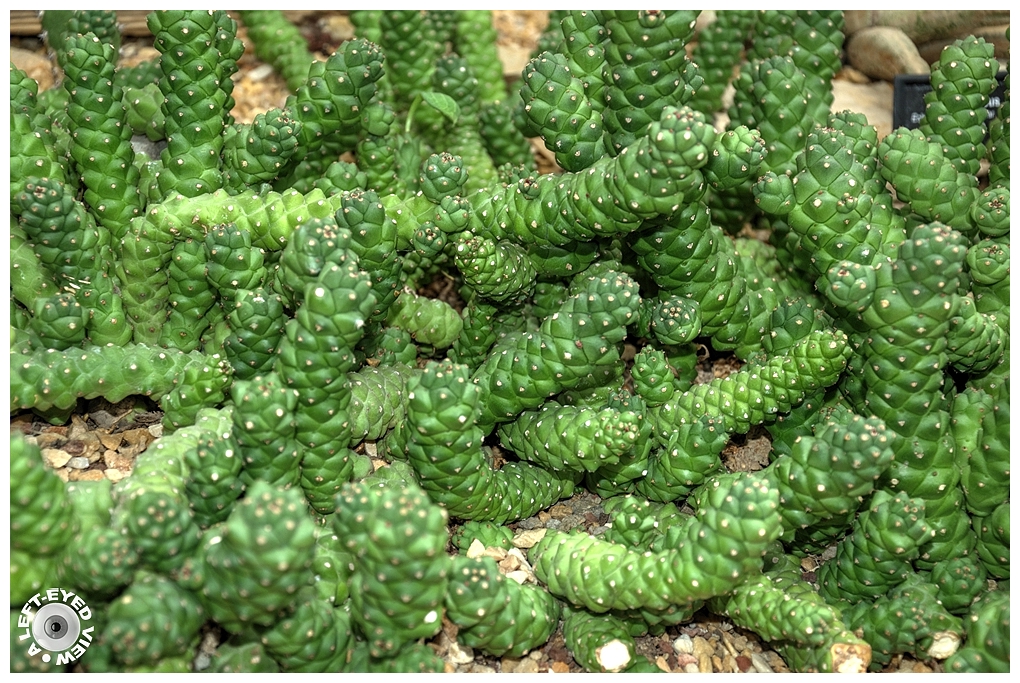 Posted by Steven (Chicagoland, United States) on 1 May 2019 in Plant & Nature and Portfolio.

Also called Euphorbia ritchiei, this rare succulent from Kenya makes an attractive plant for warm, dry environments. It has a columnar shape with small, rounded protrusions on the stem, called tubercles, that are arranged in spirals. Leaves form during the active growing season but they drop off as the seasons change. Pink flowers, called cyathia, appear on the stem tips in late summer and fall. It spreads by underground shoots and eventually forms a large clump. The stems blush red in full sun.

Spotted at the Garfield Park Conservatory on February 2, 2019.

That could be the original resident of a strange planet marveling at strange guests.

Strange plant, I have it here in a pot as well. Nice shot of that one!

interesting shape, thanks for sharig.

Like writhing pine cones. Well documented, both words and image

Interesting. They look like elongated pine cones.
Yes, the unripe ones. ;)

What a fantastic looking plant!

It reminds me of caterpillars. Lovely details captured here.

what an extraordinary plant which you've made into an amazing image

A photo from a plant with special shapes.
Very good photo.

A very interesting and beautiful plant.

What an interesting plant! I can imagine that the flowers are really pretty.

The comment about giant green grubs made me laugh. Interesting plant.

I have to commend you for taking this. When confronted with a subject like this, I can never figure out where to place the edges of the frame. Not a spectacular success, but still an interesting shot.

This shows off the quirkiness of this succulent nicely! Isn't Mother Nature amazing!

With a little imagination, it could be an anemone.
:-)
Beautiful image. Well chosen point of view.

Great details about this plant. :)