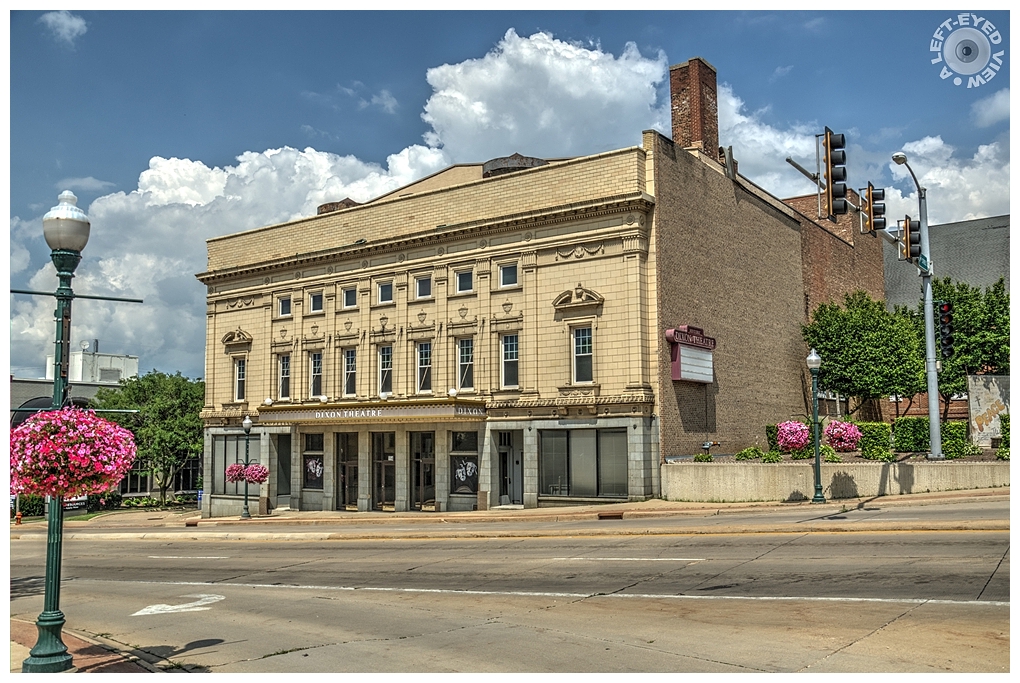 Posted by Steven (Chicagoland, United States) on 20 August 2019 in Architecture and Portfolio.

In 1920, Leonard G. Rorer, then manager of Dixon’s Family Theatre, announced he had purchased the site of the old Opera House in downtown Dixon “for the purpose of erecting the finest show house to be found between Chicago and Des Moines and from Rockford to LaSalle”. The Dixon Opera House had opened in 1876 and was the entertainment center of the area until it was destroyed by fire in early 1920. On March 15, 1922, the Dixon Evening Telegraph announced in its headline the opening of the new Dixon Theatre. A large picture of the theatre’s façade had a prominent position on the front page and several columns were devoted to a description of the interior features and decorations.

In 1922, the Dixon Theatre cost $200,000.00 to build and the local architect was William J. McAlpine, who also designed the Lee County Courthouse, the Old Post Office, and the Dixon National Bank among other public buildings. The theater, which was designed for vaudeville and later used as a movie theater, has a large stage, orchestra pit, beautiful domed ceiling which is phenomenal for natural acoustics and many other amenities necessary for the performing arts.

For several decades, the Dixon Theatre offered the Dixon area a beautiful, grand facility. Many people from this area have fond memories of dates to movies, and many area young people were introduced to plays, opera and ballet at the Dixon Theatre. The Theatre is currently a rental facility and provides a place for organizations to hold all kinds of events at user-friendly prices. Several times a year, fundraisers for the theater help to defray expenses. The Theatre accommodates live stage productions, concerts, opera, ballet, classic films, lectures, meetings, seminars and conferences.

magnificent building and architecture as well as superb post production processing
ps: could you give the link of google map so that I can look and walk down (to thousands of km from France)? Thanks in advance

Interesting story from this beautiful building.
A fantastic composition and photo.

Love the patterns and the colours!

This is a impressive building Steven and very well photographed. 5*

It looks to be a fine old building.

Beautiful image..
Thank you for all the information !

How do you always manage to get photos with no cars or people? Beautiful warm light and point of view.

@Ruthiebear: I did have one with a car and motorcycle which I thought gave it scale, but thought it may be more of a detraction.

Is this theatre located on the same street as the PO?
I can see the same slope...
Wouldn't it be nice to see tram cars there like San Francisco? :)

some people dream of the world's biggest/best, a more modest goal is the " finest ... between Chicago and Des Moines and from Rockford to LaSalle..."and it looks like mission accomplished. And your usual fine shot of it.

Quite an impressive building.

And elegant theater that is very historic.

It has such a rich and wonderful history. I am glad that it used still today. The building is beautiful.

A sober and straight-line building, with a clear appreciation of functionality rather than beautification and adornments.

love, love the historic districts of all our towns and cities

What a handsome building! I like that you kept the lovely flower baskets in the frame! Thank you for the history!

I see you're on an architecture theme for these few photos.