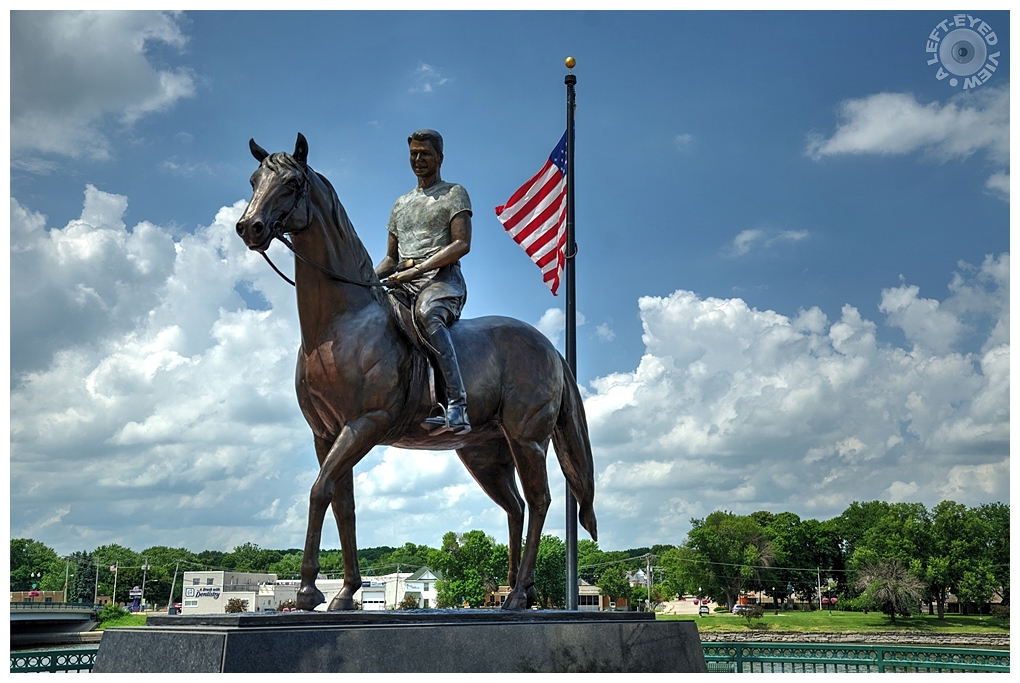 Posted by Steven (Chicagoland, United States) on 29 August 2019 in Art & Design and Portfolio.

Ronald Reagan lived in Dixon, Illinois from 1920 to 1933, and he always, and fondly, called Dixon his "hometown". Over the years, even while serving as our 40th President, he made several visits back to Dixon to catch up and reminisce with family, friends, and old acquaintances. It was one of those return visits that ultimately inspired artist sculptor Donald L. Reed to conceive the initial "Begins the Trail" statue.

In the summer of 1950, Reagan "came home" to Dixon to participate in a community festival that was known as "Injun Summer Days". During the festival parade, Reagan rode through the streets of Dixon on a palomino horse. A photograph of that ride provided Reed, some 35 years later, with his inspiration for a nine-foot high bronze sculpture tribute to Reagan.

After the death of Reagan in 2004, local donors commissioned and fully supported the life-size statue of "Dutch" on horseback as a gift to the City of Dixon. Dedicated to the eradication of Alzheimer's, the one foe our beloved President was unable to overcome.

The statue, completed by Reed in 2006, is proudly the centerpiece of Dixon's Heritage Crossing Riverfront Plaza, along the shore of the Rock River from which Reagan saved 77 lives while serving as a lifeguard in the 1920's.

Handsome Moon. Thank you for sharing its history.

A great tribute to Reagan.

Oh, I love the info provided...nice statue and nice capture of it with that flag in the background. Love that he liked to return home...

I like the crisp focus and brightness of the image, Steven. Also I enjoyed your write-up.

I find picture of the statue. I think I found the History very interesting. His saving so many was urprising to me.

A fine tribute to President Raegan

wonderful image..a great realistic sculpture here !! Just too good. And thank you for the note:)

Beautiful sculpture and wonderful tribute to President Raegan. Excellent POV for your photo.

The Jodhpur boots are so shiny.
Like spanking new.

well, I'm glad the statue is based on an event that happened in Dixon. It is a good looking statue, though not a posture we associate with Reagan.

An excellent image of the sculpture. I love that sky.

This is a beautiful sculpture and a great tribute to Ronald Reagan. I love the history behind it.

Well I had no idea! Great shot with the Stars & Stripes flapping in the background!

What a proud tribute to Ronald Reagan for this city, Steven. Lots of good information here.

Your photo is beautiful and excellent.
A great tribute to Ronald Reagan.
Thanks for the explanation.

Beautiful sculptural piece.
The sky was perfect. The clouds gave a beautiful ambience to the composition.

Thanks for the little catch-up on history. :-)