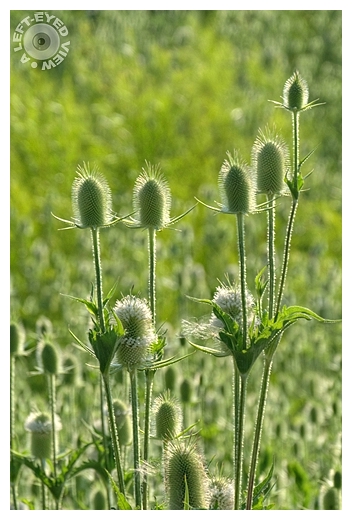 Posted by Steven (Chicagoland, United States) on 2 September 2019 in Plant & Nature and Portfolio.

A distinctive feature of the Teasel is the whorls of long vegetative leaves borne at intervals
along the main shoot. Each leaf is up to 8 to 16 inches long, bears spines along the underside of its
midrib, and is tapered (lanceolate). The leaves are not borne on stalks, but instead the leaves of
each whorl fuse into a cup-like structure around the stem, which can trap considerable quantities
of rainwater, which the plant may later utilize, but which also traps many insects which
decompose in the water. Experiments have shown that nutrients from the decomposing insects
are absorbed by the plant, increasing the number of seeds that are produced. Thus the Teasel is
partially carnivorous (insects are not apparently essential, but are a utilized source of nitrogen).

Photo captured at the Independence Grove Forest Preserve in Waukegan, Illinois on July 27, 2019.

In France we commonly call them "cabaret des oiseaux". I like!

beautiful idea this addition of the curtain of water

They look ready for take-off !

very nice back light on them. Lots around here too

They look wonderful !!
Well unlike the Venus flycatcher and Nepenthus and Drorsera , these do the trapping clandestinely I suppose !!
Thank you for the notes here. I like that water-storing capability !!

I like how you used the light. The outer sprigs seem to glow.

Love the subject, light and details !

Oh Labour Day falls on 1st May in Malaysia.
There's no Labour Day in England though. ;)

Fascinating plants! They seem to be set up for success.

How interesting that it can trap rainwater for later use. Nice shot.

It is amazing how plants and animals have adapted over time so that they can survive. This one is quite interesting. A gorgeous image and fascinating information.

Superb framing and composition!
Instead of a black and white, this photo is a true green and white.

The whole natural cycle complete with plants and animals.

Great use of light and fine structures

i love the simplicity here