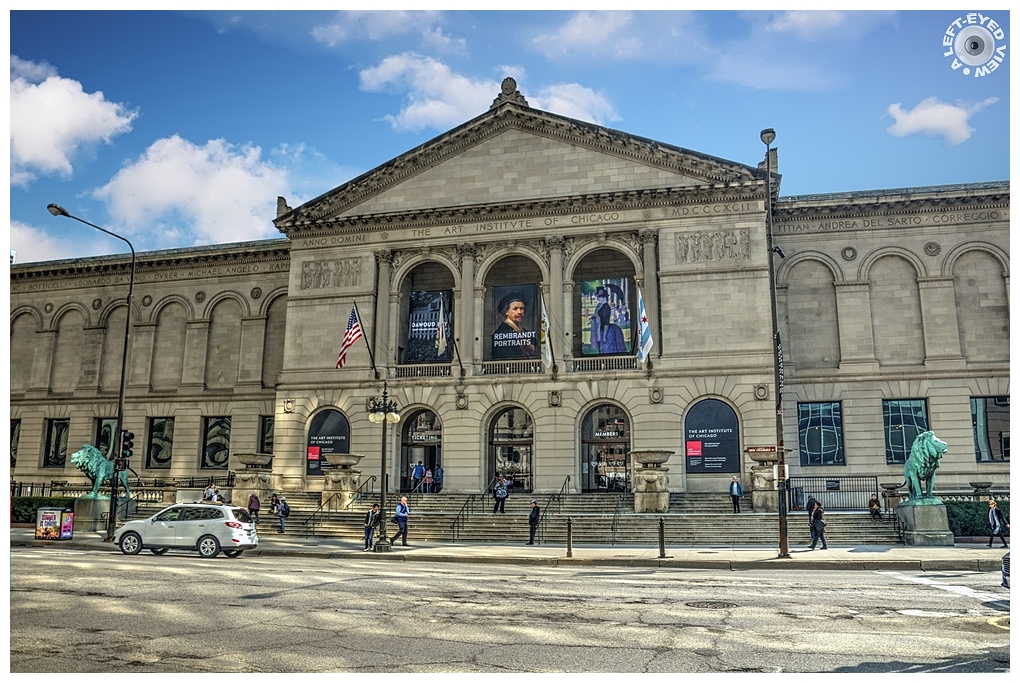 Posted by Steven (Chicagoland, United States) on 9 September 2019 in Architecture and Portfolio.

The Art Institute of Chicago, founded in 1879 and located in Chicago's Grant Park, is one of the oldest and largest art museums in the United States. Recognized for its curatorial efforts and popularity among visitors, the museum hosts approximately 1.5 million people annually. Its collection, stewarded by 11 curatorial departments, is encyclopedic, and includes iconic works such as Georges Seurat's A Sunday on La Grande Jatte, Pablo Picasso's The Old Guitarist, Edward Hopper's Nighthawks, and Grant Wood's American Gothic. Its permanent collection of nearly 300,000 works of art is augmented by more than 30 special exhibitions mounted yearly that illuminate aspects of the collection and present cutting-edge curatorial and scientific research.

As a research institution, the Art Institute also has a conservation and conservation science department, five conservation laboratories, and one of the largest art history and architecture libraries in the country—the Ryerson and Burnham Libraries.

The growth of the collection has warranted several additions to the museum's original 1892 building, which was constructed for the World's Columbian Exposition the following year. The most recent expansion, the Modern Wing designed by Renzo Piano, opened in 2009 and increased the museum's footprint to nearly one million square feet, making it the second-largest art museum in the United States, after the Metropolitan Museum of Art. The Art Institute is associated with the School of the Art Institute of Chicago, a leading art school, making it one of the few remaining unified arts institutions in the United States.

The current building was designed in the Beaux-Arts style by Shepley, Rutan and Coolidge of Boston for the 1893 World's Columbian Exposition as the World's Congress Auxiliary Building with the intent that the Art Institute occupy the space after the fair closed.

The Art Institute's famous western entrance on Michigan Avenue is guarded by two bronze lion statues created by Edward Kemeys. The lions were unveiled on May 10, 1894, each weighing more than two tons. The sculptor gave them unofficial names: the south lion is "stands in an attitude of defiance," and the north lion is "on the prowl." When a Chicago sports team plays in the championships of their respective league (i.e. the Super Bowl or Stanley Cup Finals, not the entire playoffs), the lions are frequently dressed in that team's uniform. Evergreen wreaths are placed around their necks during the Christmas season.

Beautiful building. Intersting note too Steven, thank you so much.

Look at that! Chicago can be proud to have this beauty, Steven.

A fine building Steve. A nice capture with great color.

excellent capture of this classic facade

Very beautiful to see (and read) is this building

What a grand looking viewpoint!

A really fabulous capture of this classic structure.

I think my younger daughter visited this place with her art teacher in high school.

Those lions are amazing! Such a beautiful image of this stately building.

I recognise that painting.
It's the other "half" of Seurat's Bathers at Asnières,
which can be seen at the National Gallery, London.

It's a most impressive place! Love your image - the blue sky is great, too!

A spectacular view of this building. The architecture is beautiful. I would love to visit there. The information that you added was very interesting. I liked reading about the lions!

A building of classic architecture that never goes out of style.
Great capture.

I enjoying looking at art. I was once an aspiring part-time painter.