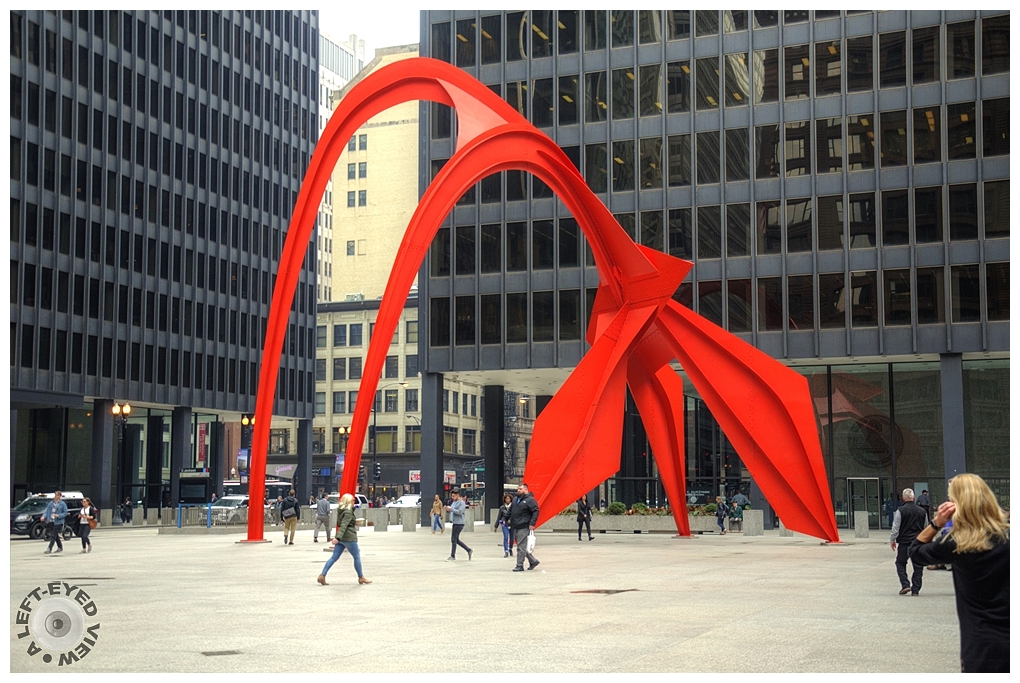 Posted by Steven (Chicagoland, United States) on 11 September 2019 in Art & Design and Portfolio.

Flamingo, created by noted American artist Alexander Calder, is a 53-foot tall stabile located in the Federal Plaza in front of the Kluczynski Federal Building in Chicago, Illinois. It was commissioned by the United States General Services Administration and was unveiled in 1974, although Calder's signature on the sculpture indicates it was constructed in 1973.

Flamingo weighs 50 tons, is composed of steel, and is vermilion in color. Calder gave the stabile its color, which has come to be called "Calder red", to offset it from the black and steel surroundings of nearby office buildings, including the Ludwig Mies van der Rohe-designed Kluczynski Federal Building. The stabile is an art form which Calder pioneered. It is an abstract structure that is completely stationary, as opposed to a mobile, which can move with air currents.

Today marks the 18th anniversary of the attacks on the World Trade Center when the dawn of the "new normal" was reality. A day we will never forget.

I can't believe I've not seen this before, Steven! It certainly stands out like a sore thumb...just like 9/11 does in our memories. Actually, this stabile is not like a sore thumb in the sense of its unique beauty, only in that it "stands out."

Stunning sculpture. From that attack, 'I remembered an image that will never be forgotten. It was like the sum of all evil.

A really amazing work of art.

First I believed I was in La Defense, Paris, where there is a similar sculpture of Calder ;-)
it's a sad anniversary today !

This is great and cool!

Lovely capture of this beautiful piece of art.

I wonder if this artist did not intervene in France, in Paris, in the "La Défense" district where there are some works that look very similar. Very nice framing.

Wonderful to see the contrast.

This is just magnificent Steven. A real interesting image. 5*

It is hard to believe it was that long ago...this is one of those things that we will all remember where we were when we heard the news.

Amazing structure. The red stands out against the building.

A fantastic art work that fits with the buildings behind it .

What a nice shot!

The color and shape really pops. I will never forget 9/11

a beautiful piece of art...
Yes..who can forget that terrible day ! Hope God punishes all such evil minded people !!

I can imagine this is even more impressive in person. I wonder what the chances would be today of this piece of art being built?

Very interesting, looks like an anchor to me though.
Are you going to show us Kapoor's Cloud Gate one day?
I have seen some of his sculptures in London too.
Of course, not as big as Cloud Gate. ;)

@London Caller: There have been lots of photos of Cloud Gate. Click HERE to see the photos posted to date.

I have always been a fan of Alexander Calder but I have never seen this sculpture before. It is stunning. It is very gorgeous. Beautifully photographed.

well, of course Calder was famous for his mobiles, so it is reasonable that he distinguishes his non-movable art with a tag like "stabile," but I don't really think he pioneered non-moving abstract art. I don't remember the Daley Plaza Picasso moving very much, and I would consider it abstract, and it was installed in 1967. But perhaps I miss a distinction important in the art world - it wouldn't be the first time. As a photo, I think you capture the sculpture well, though the blond woman in the lower right corner is not really a positive element.

Superb composition with this sculpture !

Flamingo ... will be a somewhat irrational name for sculpture. Even with all the imagination of the world, I can't see a flamingo in the sculpture. I think it will be closer to a scorpion than a flamingo.
:-P

what an amazing sculpture

Wow. I would have never imagined "flamingo".