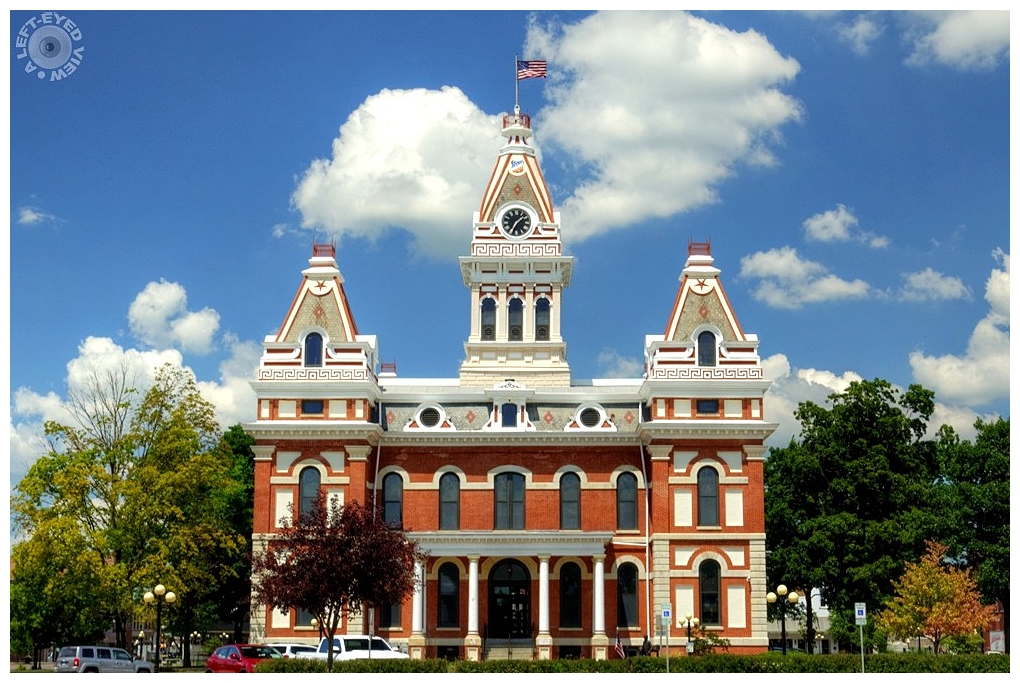 Posted by Steven (Chicagoland, United States) on 26 September 2019 in Architecture and Portfolio.

The current Livingston County Courthouse is the third building to carry that name. Construction on the present-day courthouse began in late 1874 and was completed late the next year. The courthouse was built after fire consumed the second Livingston County Courthouse on July 4, 1874. The plan for the courthouse was selected from a slate of ten candidate plans. The County Board of Supervisors noted at the time that the selected plan "cost more money (but) it was the only one which for size, fireproof qualities, and solidity would answer the purpose, and was indeed, in the matter of taste and elegance, much in advance of any other." However, the author of the 1915 The County Archives of the State of Illinois called the building "hardly fireproof". The courthouse clock tower was installed in 1892. It served as the county's primary judicial center until late 2011, when a replacement Law and Justice Center opened across the street, but officials announced plans to preserve the older building.

John C. Cochrane, a Chicago architect designed the Livingston County Courthouse in Second Empire style. The building is symmetrical and rectangular, standing two stories tall. Each of its four corners features a tower and there is also a central clock tower topping the building. Some architectural elements found on the structure include: quoins, cornices, a mansard roof, modillions, belt courses and patterned roof tiles. From the basement to the eaves the building stands 55 feet tall and the clock tower sits at 70 feet above the basement.

The Livingston County Courthouse was added to the National Register of Historic Places on November 19, 1986. It was added because it met criteria for inclusion in the areas of politics and government as well as architecture. The building was the seat of judicial activity in Livingston County, Illinois from 1875 until the 21st century, and it is a locally excellent example of Second Empire style.

Beautiful and original architecture. I like colors of this building.

Nicely documented and well captured architectural shot. It looks too cheerful to be a courthouse :)

Wow, this is sure a beauty!

Beautifully composed . The light and color is lovely.

what a magnificent structure and so well cared for

your capture is exceptional and wow, what a sky

This is probably the most fanciful courthouse I have ever seen.
Very Disney. :)

A gorgeous image of this fine old courthouse. That blue sky really makes it pop.

Marvelous capture of this classic looking courthouse. I like his paint job particularly

I love County Courthouse. I wish I'd made a collection of shots of the ones I have seen over the years. This one is very attractive.

I am so in love with these architectural beauties, Steven, especially seen in America's southern states. This one is outstanding.

This building looks even grander against the blue sky backdrop.

it is a colorful building with beautiful architecture

What a lovely building . . and perfect presentation.

It's like a palace.
Beautifully composed and the light and color is great.

Gosh what an amazing looking building... and wonderful photo!!!