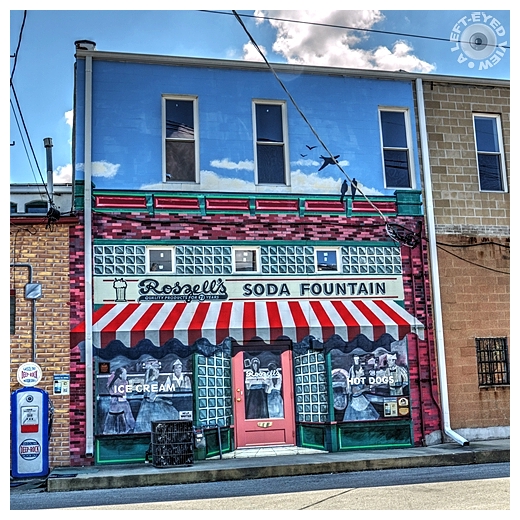 Posted by Steven (Chicagoland, United States) on 1 October 2019 in Art & Design and Portfolio.

Although the mural here is fictional, it recalls an earlier time when soda fountains were staples in almost every American small town. The name, "Roszell's," was the name of a Pontiac, Illinois dairy which operated there around the turn of the 20th century. This mural was designed by Pontiac's own Joe Diaz.

I was intrigued by the realism seen in this mural where the "storefront" shows nice depth despite being on a flat wall.

Photo captured in an alley in downtown Pontiac, Illinois on August 4, 2019.

Really great morality. Looks like it really has a soda fountain

How happy this all looks !

Beautiful photo of this superb mural reminiscent of ancient times and -amazing- there is no name Pontiac . Here also in all villages there was a fountain.

This mural is just magnificent and really interesting. The color and detail is excellent. 5*

It looks so real and three dimensional! Beautifully done.

Oh, I can't believe this is in an alley...it is wonderful. And makes one long for simpler times. But if it was simpler times I would not be seeing this!

Wow, it fooled me. Even after I read that it was painted on I was ready to step inside.

The sky effect around those second-story windows is very effective. It makes a very successful store front picture.

Oddly, this mural reminded me of Hopper's Nighthawks.
Must be the green colour?

A really excellent mural. I like the gas pump.

this is a glorious color shot. the mural is so over-the-top photo-realistic that you have to look closely to determine is is not real; this is especially true with your photo style that makes all the courthouses, and other historic buildings look almost too real to be real! your images are usually so corner-to-corner perspectively perfect that leftward tilt of the verticals and slight uphill left to right of the horizontal glare in this image (sorry to be so picky)

At first glance, I really thought it was a true facade.
The mural is very well designed and painted. The realism is evident.

These wall murals certainly add some pizzaz to a town.

These murals you've been showing are so wonderful!!