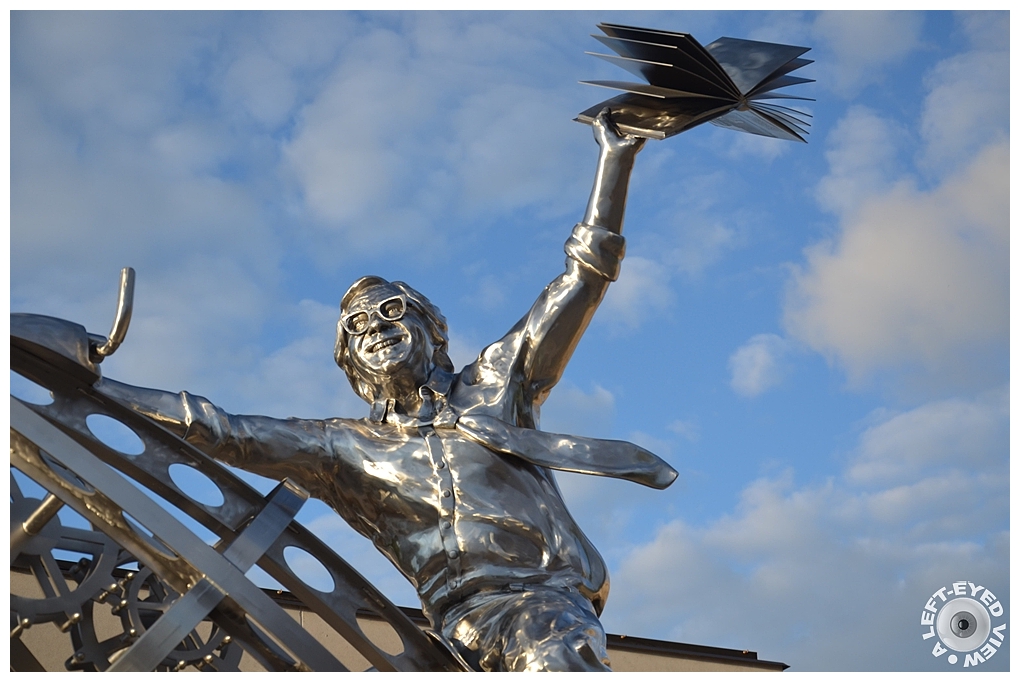 Posted by Steven (Chicagoland, United States) on 24 October 2019 in People & Portrait and Portfolio.

Close-up of the statue of Ray Bradbury, author who was born and raised in Waukegan, Illinois. Titled “Fantastical Traveler,” the statue was created in stainless steel by artist Zachary Oxman. The design — which features Bradbury, book in hand, on a rocket ship — was inspired by Bradbury’s poem “If Only We Had Taller Been.” The statue tells the story of a man “beaming with unbridled imagination, curiosity and surprise,” Oxman said at the dedication. It shows a “seasoned Bradbury” astride a vintage-style rocket ship with his “legs blissfully outstretched to the wind.” “We see a grown man on the outside yet a curious boy on the in,” Oxman said. “As a writer, Ray loved metaphors, and this rocket is the personification of the scores of novels young Ray devoured at the Waukegan Library that propelled him to uncharted worlds.

“The cogs and gears turn, interlock and harmonize, the endless churning of a vibrant and curious mind. Enraptured in the glory of the moment, Bradbury sends to the cosmos with pages fanning in the wind, beckoning us to explore, imagine, write and tell stories yet untold.” Bradbury, who died in 2012, often spoke of the hours he spent at the Waukegan Public Library, then housed in the Carnegie Building on Sheridan Road. The library moved in 1965 to its current home at the corner of County and Clayton streets. Bradbury, who received an Academy Award, two Emmy awards and a Pulitzer Prize but never attended college, struggled during his years at Central School, said Jonathan Eller, the director of the Center for Ray Bradbury Studies at Indiana University.

The statue was dedicated on August 22, 2019, what would have been Ray Bradbury's 99th birthday if he were still alive.

Great framing and magnificent rendering of the stainless steel. Bradbury is one of my favourite author.

lovely expression and feeling of motion you capture in this one

He looks happy under the beautiful blue sky.

aw!! What a beautiful close up !! Fantastic sculpture..lovely expression..great details ..and of course a great capture by you :)))))

Another great look at this sculpture. 5*

An excellent shot of the statue of this rather famous author. who hasn’t read one of his books.

This point of view made me smile. How full of joy it is!

This makes me like it even better...joy is captured in his face.

Now we see how happy he is. Very nice series.

The sky makes the details from the sculpture nicer and better.
A good and happy photo.

He looks to have been a happy person. A super shot of the statue.

the sky is quite pretty here, but the details that are made to be seen from a distance don't hold up well in a zoomed close-up. This is a near universal fact about monumental scale art, and not a criticism of your shot.

I think that this is my very favorite! Beautifully photographed. I love it! 5*

Smiling, the trip will be much more enjoyable.
:-)

Great is this detail.

An excellent shot of the statue, best photo!

Praise be for memorials for authors !

I love this sculpture! It's so happy!