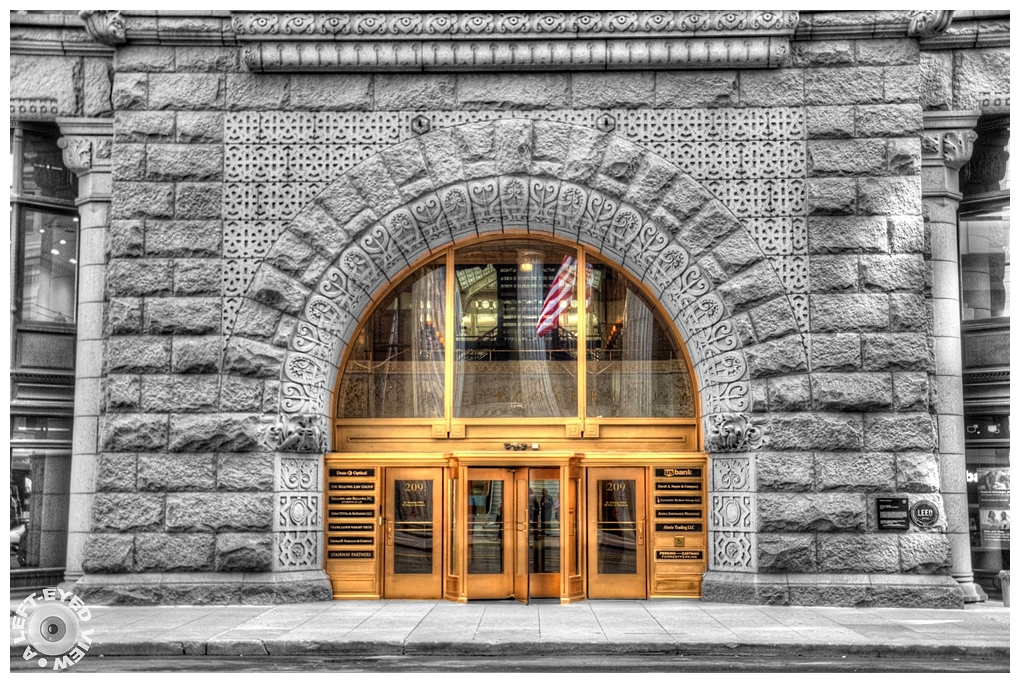 Posted by Steven (Chicagoland, United States) on 11 November 2019 in Architecture and Portfolio.

The main entrance to The Rookery Building in selective coloring. As one of the most historically significant buildings in Chicago, The Rookery is a unique enclave for businesses that value a prestigious presence. An icon in the center of Chicago's downtown Financial District, The Rookery seamlessly combines the flair of an era gone by with state-of-the-art building systems and technology. Designated a Chicago Landmark in 1972 after being added to the National Register of Historic Places in 1970, The Rookery is universally considered an architectural masterpiece.

Designed by famous architectural partners Burnham and Root, the picturesque Rookery was originally completed in 1888. Adding to its impressive stature, Frank Lloyd Wright redesigned the stunning two-story, sky lit lobby in 1905. Meticulously renovated and maintained, The Rookery stands as one of the most highly recognized addresses in all of Chicago.

With the selective coloring, Steven, this is a WOW. I love architectural wonders like this, especially when found in America!

Impressive work around this entrance

I'm pretty sure the color of the facade is not very far from it: nice hot/cold contrast!

A very impressive entrance to this great building.

The emphasis is now nicely on this beautiful glass entrance

What an entrance! Oh it is fabulous.

Excellent photo from the colored entrance to this building.
A very interesting story about this beautiful building.

wow, the flag showing through the window is superb

A wonderfully ornate and stately entrance, given a very smart bit of selective color treatment.

Beautiful warm tone in the wood makes a nice contrast to the ornate gray stone work.

beautiful detail and fine use of partial color

This is a gorgeous building. I love how you used selective color. The reflections are magnificent. 5*

What fantastic architecture! And I just love how you've photographed it, allowing the gorgeous golds to brighten up the monotone block work!

The cut out technique was well applied to this photo.
No doubt that evidenced the entrance.