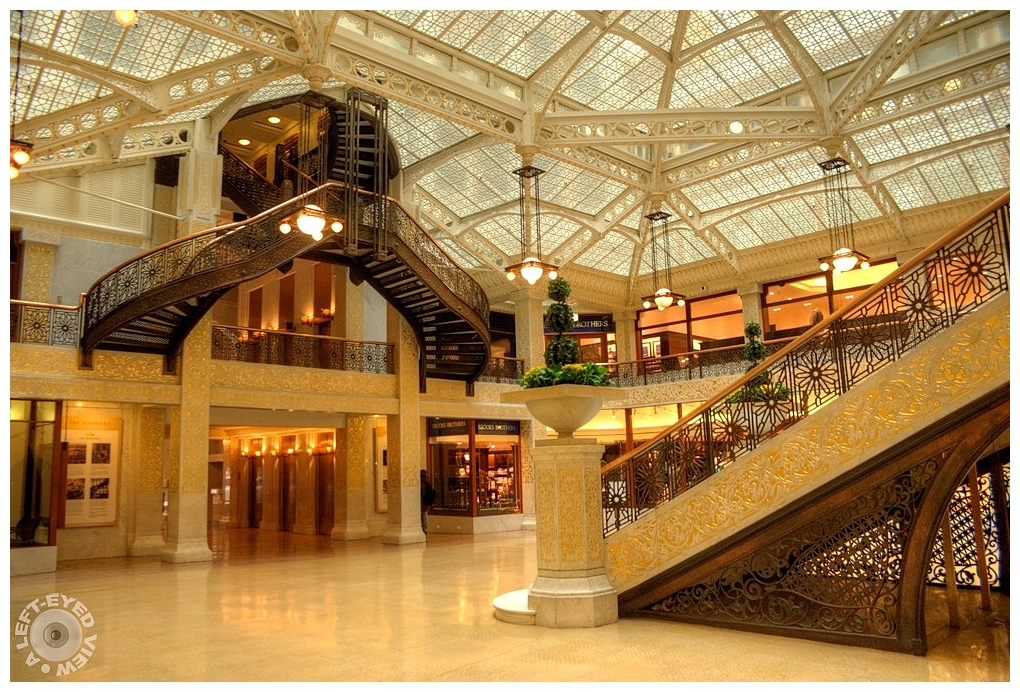 Posted by Steven (Chicagoland, United States) on 12 November 2019 in Architecture and Portfolio.

View of the Rookery Building's Atrium space as you look north toward the entrance beyond the bank of elevators. An oriel staircase you see that lands on the mezzanine level of the atrium space. Before the major renovation undertaken by McClier Architects in 1988, the atrium had undergone extensive change in prior decades. Maintenance trumped natural light aesthetics, and the skylight of the Atrium was covered with waterproofing and paint. Most of the previously translucent surfaces, like the windows, were also painted over. These changes transformed the space, robbing it of its airy, fanciful atmosphere that once made the Rookery unique. In subsequent years the skylight was tarred over and painted many times which transformed the light-filled space to an illuminated cave.

McClier restored the court’s glass ceiling, protecting it and the light well by installing a new skylight at roof level. In essence, a skylight above a skylight. They also uncovered original mosaic floor fragments, from which they extrapolated a new overall design for the floor.

My visit to The Rookery on March 28, 2019 was compromised by the atrium space being occupied by planners preparing the space for a wedding two days later. So I present to you a shot from my archives taken in 2011. Much of the space looks exactly the same eight years later.

The canopy and sculptures on the balcony and stairs are absolutely superb. Very nice framing too

Hello
The design of this corbelled staircase is absolutely superb. The angle of view of your image is perfect

Wow, this is a fabulous space. A fantastic photo.

Very impressive . . it all but looks alive !

Hello,
fabulous space, great architecture, i like it!
Nice day to you Steven

A magnificent look inside this excellent building Steven. Superb light and color.

Beautiful capture of this lovely space. painting over the skylight. what a bizarre thing to do

Interesting explanation. Thanks you very much. The image is wonderful.

Great and beautiful architecture.
A fantastic picture with the warm light.

This kinda of design is actually very Victorian.
Especially the Islamic geometric patterns to the staircase metalwork.

such a beautiful structure

Very beautiful . I am glad you had another photo from before to show us this superb place !

Wow. That is an ornate bit of beauty.

This is just magnificent. So much attention to detail. The architecture and the interior is stunning.

I was so hoping you would show more...I tell you I came back yesterday and looked and looked at that entrance. This place is so beautiful. An amazing place.

@Rose: You will be seeing a lot more photos of this place. :-)

Gosh this is so beautiful! What amazing light it now has - so nice that it's been restored! That suspended walk way / staircase is fabulous!

spot on perspective in this luxury interior shot. amazing detail in recording - I wonder though whether the overall gold/yellow tone is as you saw it or a white balance selection.

An amazing architecture inside this building !

Luxurious.
To some extent, I think it has similarities to the arabic architectural/decoration style.
No doubt it's beautiful.

awesome building, the stairs are incredible!