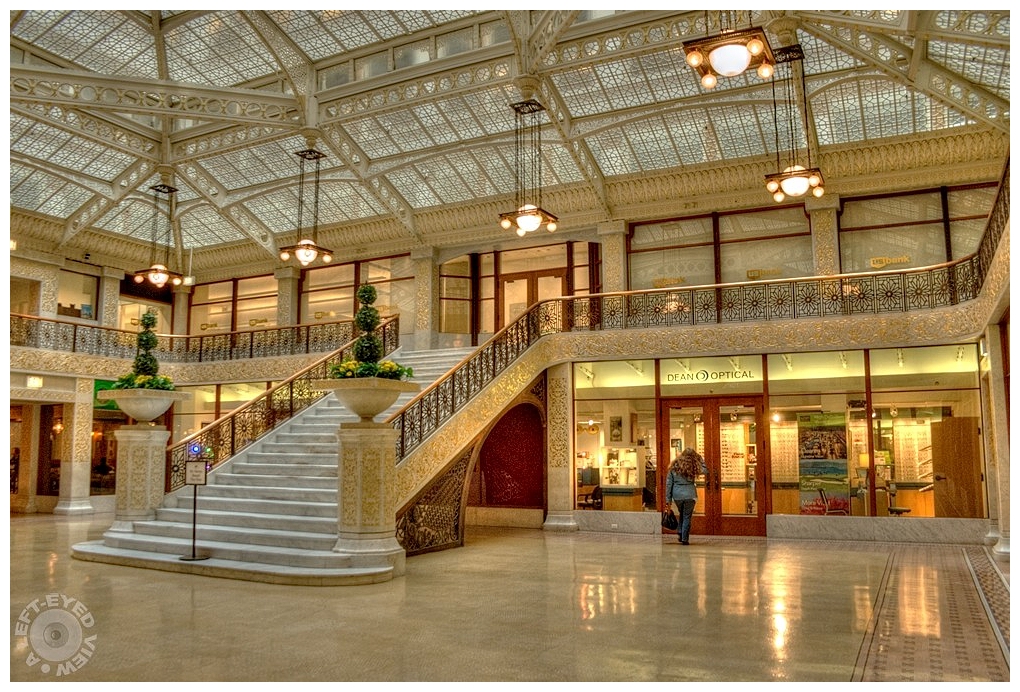 Posted by Steven (Chicagoland, United States) on 14 November 2019 in Architecture and Portfolio.

View of the Rookery Building's Atrium space as you look south opposite the entrance. Before the major renovation undertaken by McClier Architects in 1988, the atrium had undergone extensive change in prior decades. Maintenance trumped natural light aesthetics, and the skylight of the Atrium was covered with waterproofing and paint. Most of the previously translucent surfaces, like the windows, were also painted over. These changes transformed the space, robbing it of its airy, fanciful atmosphere that once made the Rookery unique. In subsequent years the skylight was tarred over and painted many times which transformed the light-filled space to an illuminated cave.

McClier restored the court’s glass ceiling, protecting it and the light well by installing a new skylight at roof level. In essence, a skylight above a skylight. They also uncovered original mosaic floor fragments, from which they extrapolated a new overall design for the floor.

My visit to The Rookery on March 28, 2019 was compromised by the atrium space being occupied by planners preparing the space for a wedding two days later. So I present to you a shot from my archives taken in 2011. Much of the space looks exactly the same eight years later.

I like this angle...and the stairway...and the reflection on the polished floor !

so much golden light and pretty nice reflections...

Even good shot. Many details in this architecture.

What an expressive image of this remarkable architecture.

You have to wonder how anyone could contemplate painting over that wonderful ceiling. Another lovely capture of this beautiful space

Such a fantastic place...

I dreaming to photograped the architecture from this building .
Another magnificent warm picture with many details .

Such elegance. A beautiful shot of this gorgeous interior.

Beautiful! What an elegant and grand looking place

This building is wonderful. Excellent point of view...

This is such a warm and welcoming Atrium.

No access to US Bank on first floor?
Oh, it's second floor there, right? ;)

Fine comment to go along with an excellent picture of this place.

it's quite an extraordinary structure

A breathtaking interior and wonderful photo of it.

it is so sad the abuse that beautiful architecture and construction sometimes suffer in the name of expediency. it is even sadder when one is allowed to deteriorate to the point of destruction, as so many have. So when one is rescued and restored it a positive for us all to appreciate

That is another lovely shot.

The architects did a magnificent job with the renovation. I love the color and the lighting in the space.

I can totally see why you are captivated by this historic landmark, Steven. Thanks for showing it to us so carefully...and brilliantly.

Really a beautiful building with atmosphere

@Elizabeth Buckalew: Not to worry! We all have things to do and places to go. Have a great week ahead!