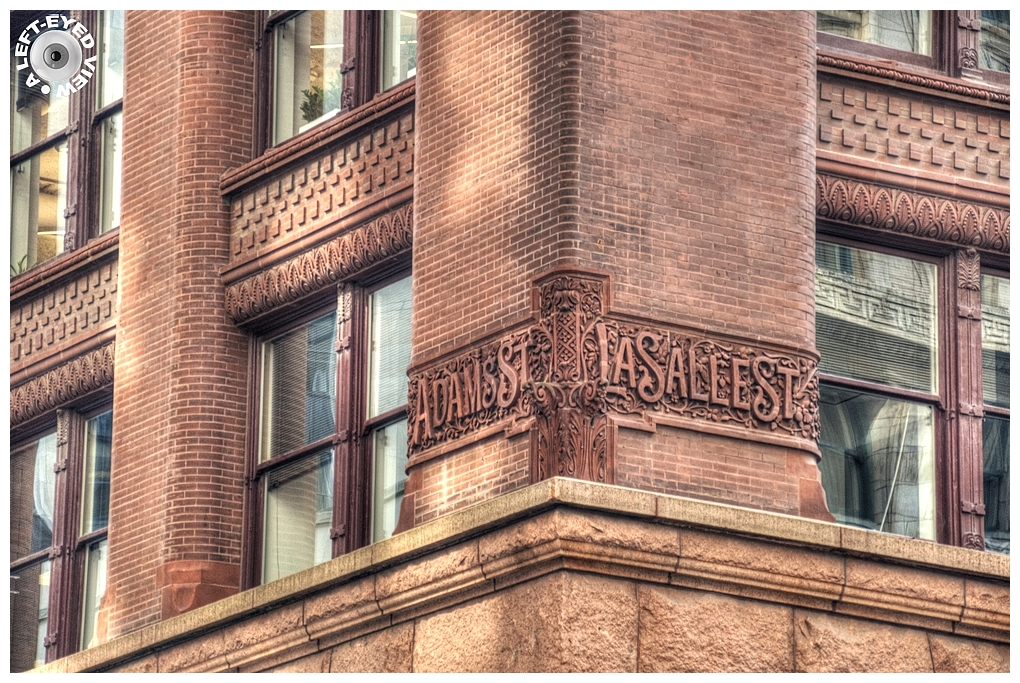 On the Street Corner

Posted by Steven (Chicagoland, United States) on 18 November 2019 in Art & Design and Portfolio.

The corner of the Rookery Building highlighted with the names of the streets (Adams Street and LaSalle Street) incorporated into the facade. As one of the most historically significant buildings in Chicago, The Rookery is a unique enclave for businesses that value a prestigious presence. An icon in the center of Chicago's downtown Financial District, The Rookery seamlessly combines the flair of an era gone by with state-of-the-art building systems and technology. Designated a Chicago Landmark in 1972 after being added to the National Register of Historic Places in 1970, The Rookery is universally considered an architectural masterpiece.

Designed by famous architectural partners Burnham and Root, the picturesque Rookery was originally completed in 1888. Adding to its impressive stature, Frank Lloyd Wright redesigned the stunning two-story, sky lit lobby in 1905. Meticulously renovated and maintained, The Rookery stands as one of the most highly recognized addresses in all of Chicago.

Beautiful framing. I like red bricks of this architecture.

It has a Celtic flair to me, Steven. I can imagine how proud people are to work there.

Advantage: street signs are not likely to fall off; disadvantage: you can no longer rename and change street names

Ah, they sure knew how to turn a corner back then . .

This is a veru good detail of this streetcorner

This is something I have never seen...another wonderful detail of this building.

The names of the streets are beautifully displayed. I've never seen street names like this before-

Fantastic framing and beautiful details in the building. The street name in the wall is gorgeous. I love it.

Fine details at this corner

Beautiful brickwork to this magnificent building.

That is really nice.

I love the beautiful decoration on the outside of the building. The design of the street names is exceptional. A gorgeous image.

oh, i love how they did the typography

A lovely image of this special building. I love that brick and stone work.

Those details are wonderful!!! I love the tones in your image!

boy, they sure don't include wonderful details like this in modern architecture, do they?

a change from the metal signs, a building worth keeping

Excelent idea.
I had never seen anything like it.
This way, the streets will probably hardly change their names. ;-)