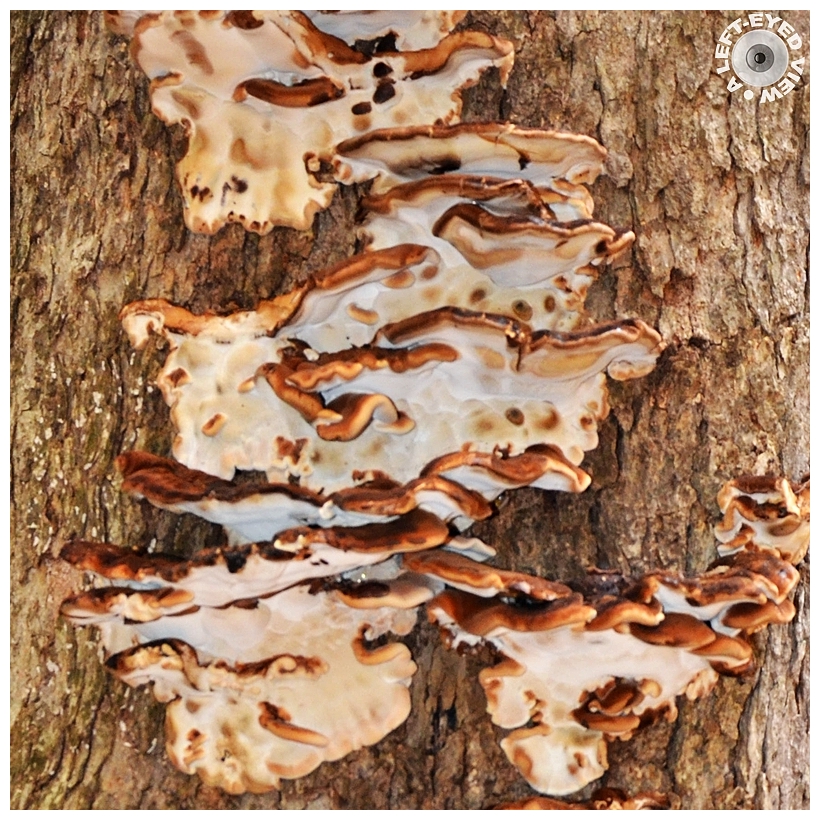 Posted by Steven (Chicagoland, United States) on 9 December 2019 in Plant & Nature and Portfolio.

I believe this species of fungus is the Ischnoderma resinosum. Commonly known as the late fall polypore, resinous polypore, or benzoin bracket, this shelf mushroom is 3–10 inches across, velvety, dark red/brown, aging black. Its spongy but tough, sweet smelling flesh exudes a red liquid when young. This fungus fruits on hardwood logs and stumps in late autumn. A widely distributed species, it has been recorded from Africa, Asia, Europe, and North America.

The species was originally described as Boletus resinosus in 1794 by German botanist Heinrich Schrader It has acquired an extensive synonymy in its taxonomic history, having been juggled between several genera. Petter Karsten transferred it to Ischnoderma in 1879 to give it the name by which it is currently known.

If you recognize this as a different species, please share.

Spotted in the Maple Grove Forest Preserve in Downers Grove, Illinois on October 26, 2019.

I'm always intrigued when I see shelf fungi like this, Steven, whatever its name. You found some that look quite delicious.

I cannot help with the ID . . but I start to see faces in these formations !

Interesting picture Steven and information about the fungi.

good image and background information. is it edible?

I've never seen it. thanks for sharing.

Great mushroom to see.
Unfortunately the tree is shortly dead :-(

Yes, when mushrooms cling, the tree is dying. THe pattern and shapes are intriguing.

wonderful capture of these fungi/mushrooms.And thank you for all the info.

Scientific knowledge about fungus, I don't have. If Steven says it's Ischnoderma resinosum, I accept and believe.
:-)
Beautiful family.

Oh, this is a pretty one. I like that creamy flesh and the light brown tops. The "conks" we have here are nearly so nice. The tops are a much darker brown usually.

Could be a painting, nice part of a tree or mushroom

Interesting fungus growing on the tree. I have no idea what kind it is.

I have seen this on trees but did not know much about it. Great information. The textures are fabulous!

an interesting, almost abstract image, along with more than I ever wanted to know about that fungus (just kidding)

Amazing! Thank you so much for the info - I've seen it so often, but never knew all of that!

I wonder if it is edible. I am often surprised by the number that are.