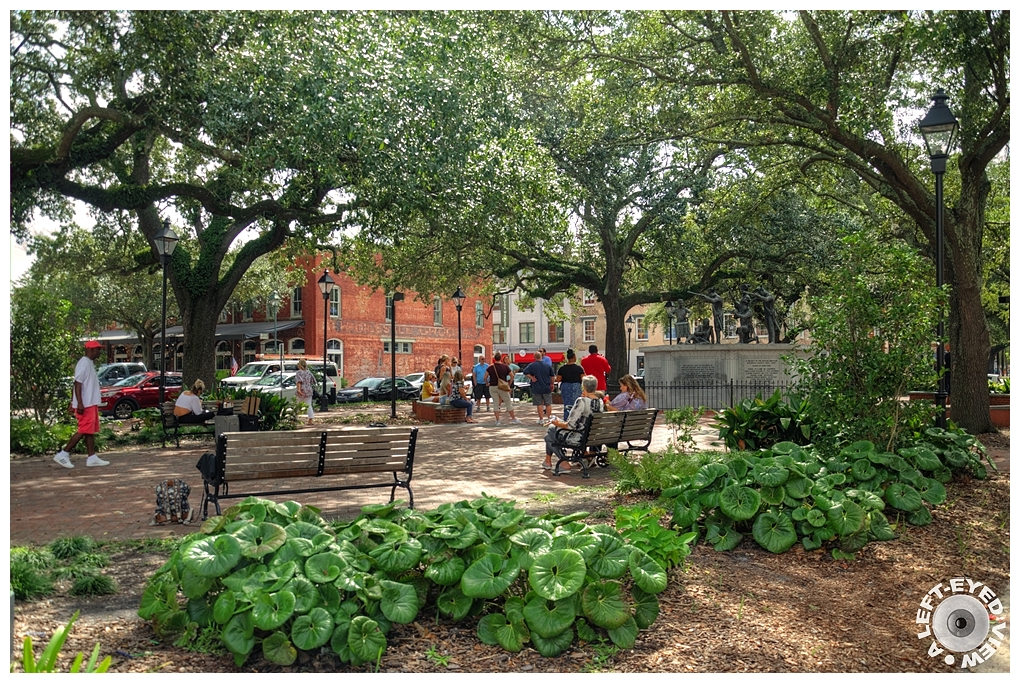 Posted by Steven (Chicagoland, United States) on 11 December 2019 in Cityscape & Urban and Portfolio.

Located near City Market in Savannah, Georgia, Franklin Square was designed in 1790 in honor of Benjamin Franklin, who was an agent for Georgia in London. It was once known as “Water Tower Square,” because it was home to the city’s water supply in the mid to late 19th century. The square was restored in the late 20th century after the square’s dissection due to Federal Highway 17.

In the middle of the square is the Haitian Monument. The monument pays tribute to the Haitian soldiers who fought for American Independence during the Siege of Savannah in 1779. Sculpture James Mastin created this work, which demonstrates the “Les Chasseurs-Volontaires de Saint-Domingue,” or Freedom Fighters. The boy is 12-year-old Henri Christophe, who became the commander of the Haitian army and King of Haiti.

The red brick building in the background is home to Belford's, a great restaurant with the best crab cakes.

Thank you for this beautiful colorful photo, I really like the large sheets in the foreground and the colors of the whole. Thanks also for the note

Looks like a nice area to sit and relax Steven. Nice capture.

well documented and nicely framed with the trees

What a fine place to be this old square

Beautiful image... Thank you for the history..It sounds amazing..
Love the way you have captured this place

I am particularly interested in the monument to the Haitian soldiers. My husband heads a mission to Haiti, and what a sad history that country has. A superbly composed view.

I love visiting the many squares in Savannah. Good shot.

a beautiful city for sure

I have been to Benjamin Franklin House in London. :)
The plants in the foreground intrigue me.
Are they bergenia?

A beautiful scene with so much history. I love those old trees. They are gorgeous. I have never been to Savannah but would love to go some day.

That is quite a serene scene.

I like the history lesson. Your photo of the park is nice but a slice of time shot, so I wonder what draws almost all the people away from you and into that exit toward the brick building.

Ahhh wonderful! I was there a year ago and loved that town!

Oh gee, I am quite intrigued by those bushes with the large round leaves. I haven't seen anything like them before. I am wondering if they have some type of root vegetable in their base.