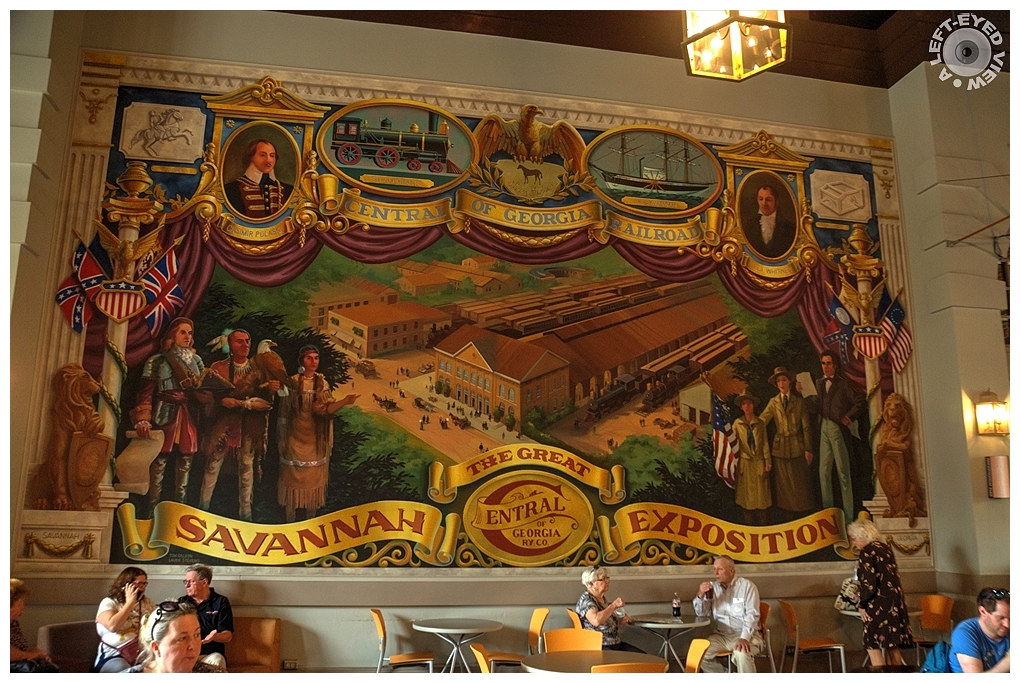 Inside the Savannah Visitor Center

Posted by Steven (Chicagoland, United States) on 17 December 2019 in Art & Design and Portfolio.

Mural spotted inside Savannah, Georgia's Visitor Center. The central image on the mural is the Central of Georgia Railroad buildings that used to take up most of this area. Several of them still exist and are museums including the building where this mural is. Scattered around the edges of the mural are famous people from Savannah's rich history.

On the right lower corner are a woman and young girl in girl scout uniforms. Savannah is the birthplace of Juliette Gordon Low, the founder of the Girl Scouts in the US. In the upper right hand corner is Eli Whitney who invented his cotton gin while at a plantation in the Savannah area. Next to him is his invention. Also in the upper right hand corner is the S.S. Savannah, the first Steamship to cross the Atlantic Ocean.

In the lower left corner are James Oglethorpe, the founder of Savannah and Georgia. Next to him is Tomo-chi-chi the Native American who signed a treaty with Oglethorpe for the land for Savannah. Next to him is Mary Musgrove, who interpreted for the two men. In the upper left corner is Casimir Pulaski who was a Polish General in the US Revolutionary War and was killed in the attempt to retake Savannah from the British.

A whole slice of history is symbolized in this fresco. It's very beautiful

A nice wall painting full of history. Some proud of the South.

A superb capture of this excellent mural Steven. 5*

wel captured. the mural has a nice sense of depth to it

wow, imposant, thx for the explanation

interesting picture. Thanks for sharing.

Great capture of this beautiful mural !

Fabulous image of this impressive mural

Amazing wall art this size inside. History adds to the enjoyment.

@London Caller: Cotton gin as stated in the narrative.

A beautiful image of this large mural. A lot of history is displayed there.

Savannah is a fun place to visit with so much history. Nice shot of the mural.

That is quite the mural.

a beautiful mural with fine color and detail. You have deviated from your usual perfect perspective, and the inclusion of random people is interesting except for the "half-people" on each edge.

This is a beautiful mural. It tells so much about Georgia's history. Wonderful narrative information. There was a lot I did not know.

A mural rich in history. This makes it even easier and more enjoyable to learn history.

it was quite the booming area with so many structures

That is such a striking piece on the wall.