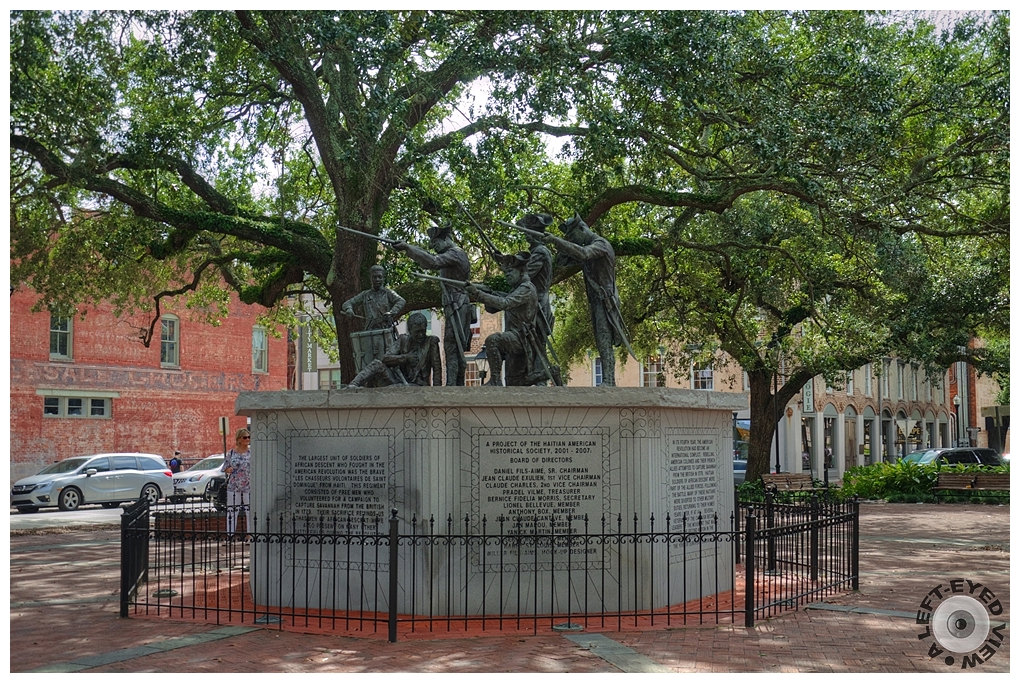 Posted by Steven (Chicagoland, United States) on 18 December 2019 in Art & Design and Portfolio.

Savannah’s Haitian Monument commemorates the contribution of the Chasseurs-Volontaires de Saint-Domingue to the fight for an independent America. One of the few black regiments to fight for the American side in the Revolutionary War, the soldiers were recruited from present-day Haiti, then the French colony of Saint-Domingue. The Chasseurs-Volontaires de Saint-Domingue were all volunteer soldiers, ten companies of light infantry recruited from amongst the free men of color, as they were then termed, in the former French colony of Saint-Domingue (now Haiti).

The men were enlisted as a special expeditionary force, part of a contingent of French troops brought into the southern theater of the Revolutionary War under the command of the French general Charles Hector, the comte d’Estaing, to reinforce the flagging American side. Though seldom commemorated, black and African-American soldiers participated in their thousands in the Revolutionary War, both as patriots and loyalists. Many were former slaves offered their freedom in exchange for military service; others, such as the Chasseurs-Volontaires, enlisted as free men.

In the early years of the war, African-American soldiers served in the New England militia, fighting at Lexington, Concord and Bunker Hill. With the creation of the Continental Army, tensions rose over the inclusion of black men in the American forces. Southern slaveholders were unwilling to arm their slaves, fearing an uprising. The resulting ban on enlisting black soldiers led many African-American men to fight for the British instead, who offered freedom and wages in return for service. By the end of the war about 20,000 black soldiers were fighting for the British side.

A shortage of white recruits brought an end to the American ban on black soldiers, a policy which had always had its opponents (including Continental Army General Nathanael Greene, whose monument stands a few blocks over in Johnson Square). Southern slaveholders continued to resist the enlistment of their slaves.

Recruitment for the Chasseurs-Volontaires was straightforward, with more men signing up than were required. Soldiers came from all walks of life. Some of the men were members of Saint-Domingue’s black elite, for whom signing up may have been a way to express their masculinity and patriotism. Men from less well-to-do backgrounds may have primarily enlisted for the pay, which was the same as that offered to regular (white) French troops. After a several-year term of service, many could hope to have accrued enough money to pay for some land or a start in a trade.

Very interesting information here .
Lovely image too. ..with all those " aiming " soldiers up the podium.
Awaiting the closeups of the same :)))))

A beautiful tribute to "chasseurs volontaires"

I love that this part of our history has been so well-documented in this square, Steven. Thanks for helping to preserve it.

Everything looks 'right' in this . . a belonging.

Well we all make mistakes :) Your usual excellent combination of documentary photograph and background info

Lovely capture of this beautiful piece of art.

Thank you for all of this information. I was very curious to see this close up. I appreciate it.

I am embarrassed to say I did not know this....it is all so interesting to me.

France & the USA, BFF!
Even got the Statue of Liberty from them.

A fine history with a great looking picture.

What an information, great to trad.
Very fine log

What an information, great to trad.
Very fine log

A beautiful monument set off nicely by the trees. A most interesting history you share with us. As to discrimination in the ranks I know, from what I saw in the mid-1960s, that certain high ranking NCOs were still very biased rather openly. Many others weren't of course. Among commissioned officers, I didn't see this blatant bias.

an exceptional monument surrounded by the unmistakably Savannah trees. (nice that you included to history)

What an amazing history. I had never heard about this. I am glad that there is a statue dedicated to these brave soldiers.

That is a nice write up.

a stirring monument and a fine history lesson

A fine picture of this great monument. And interesting information on the history. Excellent. :)

Oh gee, I don't know many jobs these days that would give enough money to buy a piece of land after a few years.