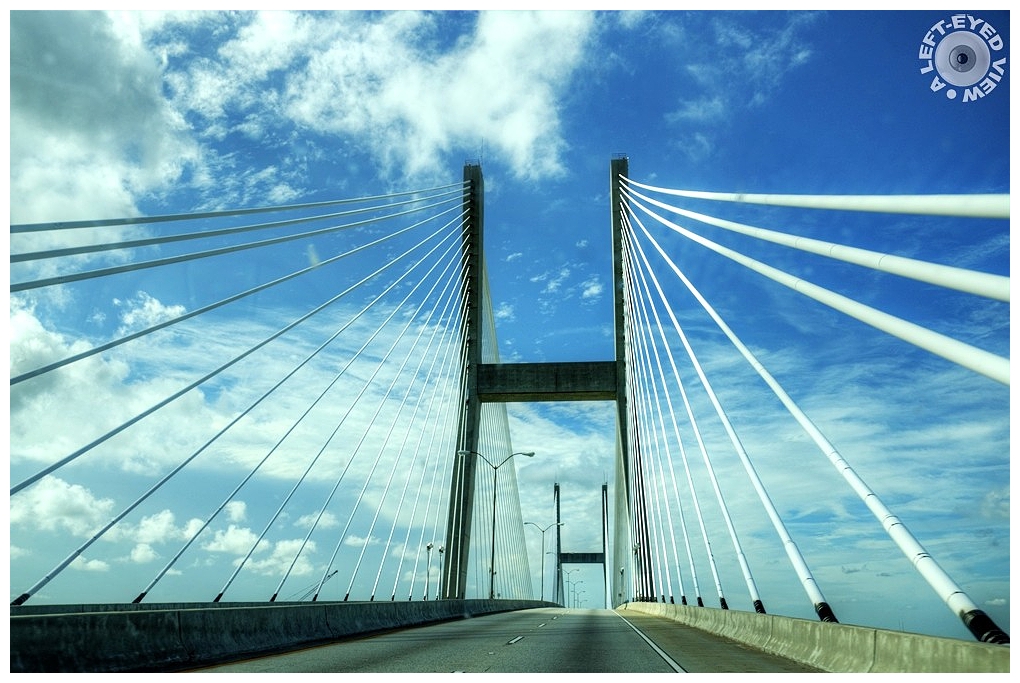 Posted by Steven (Chicagoland, United States) on 19 December 2019 in Transportation and Portfolio.

The structure is dedicated to Eugene Talmadge, who served as the Democratic Governor of Georgia in 1933-37 and 1941-43. The replacement bridge was originally suggested to be named for the Native American Creek leader Tomochichi, an important figure in Savannah's founding in 1733. After public forums on the issue, the original name was restored for the new structure.

It is huge, amazing and awesome.

beautifully graphic this image Steven, and thank you for all the interesting explanations

Excellent shot of this great bridge without a car in sight.

It's nice to drive on the beautiful bridge on a sunny day.

excellent perspective capture with the dynamic of the suspension cables

Thank you for the detailed note here.
Lovely image and a fabulous sky !

I remember going on this impressive bridge. Nice shot. (Were you driving and shooting? ) ;-)

Shot from a great perspective...now you have made me want to get on google earth and look at Savannah!

Very beautiful photo of the bridge .

A neat shot of the web of cables supporting the bridge.

A magnificent view crossing over the bridge! Interesting information.

Shot from a wonderful viewpoint to get this dramatic look.

What a fabulous perspective, Steven,with the second set of struts (?) framed so nicely by the first.

What a GREAT view on the road and bridge

Amazing view, I love this kind of shots!

Good highlight of the lines.
But if you're driving, don't drink alcohol, don't talk on your phone, don't texting and don't take photos.
:-D :-P

such beautiful frame, perspective & lines!
A M A Z I N G !

Not even a single car on the bridge?!
Apart from you, of course.

Love the angle you captured with the lines drawing your eyes to the skies.