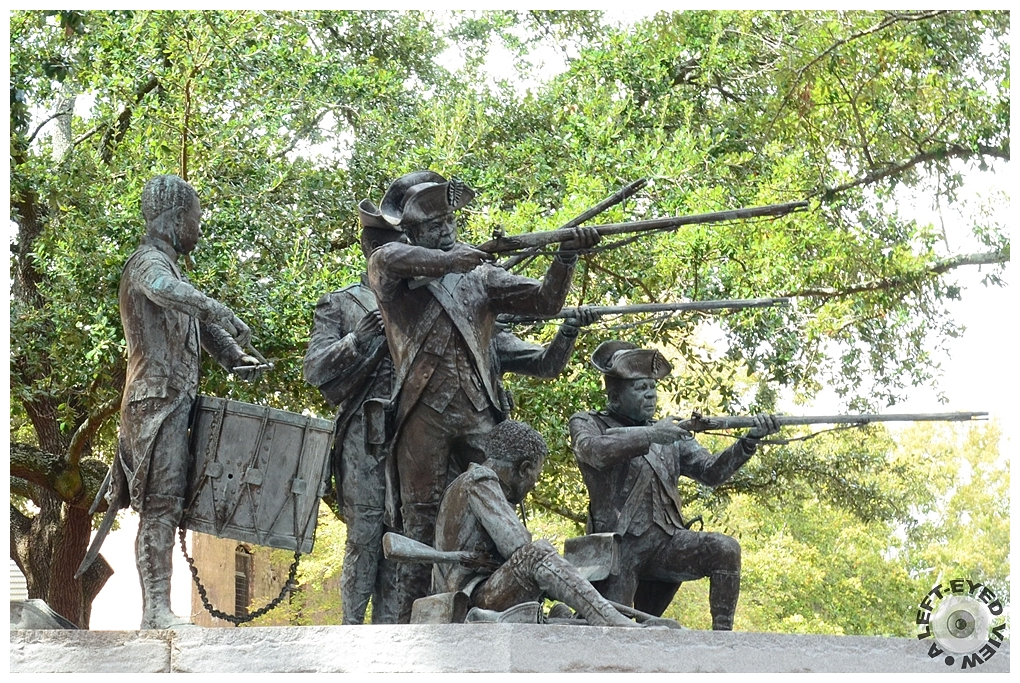 Posted by Steven (Chicagoland, United States) on 23 December 2019 in Art & Design and Portfolio.

Savannah’s Haitian Monument commemorates the contribution of the Chasseurs-Volontaires de Saint-Domingue to the fight for an independent America. One of the few black regiments to fight for the American side in the Revolutionary War, the soldiers were recruited from present-day Haiti, then the French colony of Saint-Domingue. The Chasseurs-Volontaires de Saint-Domingue were all volunteer soldiers, ten companies of light infantry recruited from amongst the free men of color, as they were then termed, in the former French colony of Saint-Domingue (now Haiti).

The men were enlisted as a special expeditionary force, part of a contingent of French troops brought into the southern theater of the Revolutionary War under the command of the French general Charles Hector, the comte d’Estaing, to reinforce the flagging American side. Though seldom commemorated, black and African-American soldiers participated in their thousands in the Revolutionary War, both as patriots and loyalists. Many were former slaves offered their freedom in exchange for military service; others, such as the Chasseurs-Volontaires, enlisted as free men.

In the early years of the war, African-American soldiers served in the New England militia, fighting at Lexington, Concord and Bunker Hill. With the creation of the Continental Army, tensions rose over the inclusion of black men in the American forces. Southern slaveholders were unwilling to arm their slaves, fearing an uprising. The resulting ban on enlisting black soldiers led many African-American men to fight for the British instead, who offered freedom and wages in return for service. By the end of the war about 20,000 black soldiers were fighting for the British side.

A shortage of white recruits brought an end to the American ban on black soldiers, a policy which had always had its opponents (including Continental Army General Nathanael Greene, whose monument stands a few blocks over in Johnson Square). Southern slaveholders continued to resist the enlistment of their slaves.

Recruitment for the Chasseurs-Volontaires was straightforward, with more men signing up than were required. Soldiers came from all walks of life. Some of the men were members of Saint-Domingue’s black elite, for whom signing up may have been a way to express their masculinity and patriotism. Men from less well-to-do backgrounds may have primarily enlisted for the pay, which was the same as that offered to regular (white) French troops. After a several-year term of service, many could hope to have accrued enough money to pay for some land or a start in a trade.

See the full view of the monument from last Thursday HERE.

Oh yes, Steven. I remember walking all around this to see as much of it as possible. It's quite a monument.

A wonderful image of these richly detailed figures. It is a beautiful monument.

wonderful image with great details ! fantastic shot !! Thank you for the note too :)))

"Many were former slaves offered their freedom in exchange for military service..."..

The history of Haiti is quite fascinating. I was not aware how much it influences our country's history.

What a histoy and good caught this part of the history.

Excellent angle for this. I remember being quite moved by this monument. We owe them a debt of gratitude, no doubt!

This sure is a fine monument...

Interesting statue and a good history lesson to go with it.

What a powerful history the country has had.

This is such a wonderful tribute to these Haitian soldiers who fought in the Revolutionary War. I really like the close up image. Very interesting information.

I think this monument is worth the close up

Beautiful closeup of the monument. And interesting information on the history. :)