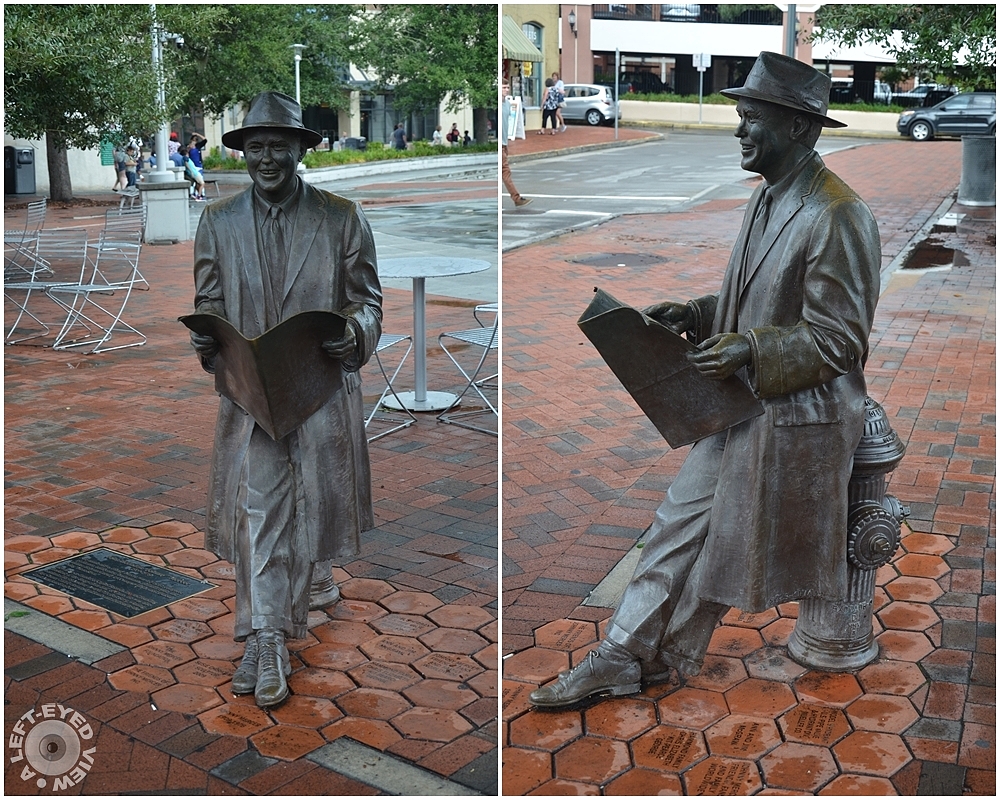 Posted by Steven (Chicagoland, United States) on 6 January 2020 in Art & Design and Portfolio.

One hundred years after the day he was born, one of Savannah's favorite native sons, Johnny Mercer, was honored with a life-size bronze statue that was unveiled near the northwestern corner of Ellis Square. Besides being a long overdue tribute to the legendary songwriter, the sculpture marked the end of a project almost a year in the making for local sculptor Susie Chisholm.

Chisholm started with a 70-year-old photo of Mercer leaning against a fire hydrant in New York and reading a paper. She painstakingly transformed it into a three dimensional statue that would be cast into a mold, transported to a foundry in Utah, and then filled with 2000-degree molten bronze before being welded back together and dropped off at its home near the Ellis Square visitors kiosk.

To accurately recreate the image from the selected photo, film producer and Mercer family friend Stratton Leopold sent a copy out to costume designers at Paramount Studios, where period specific items were made to match the clothes from the image, explains Chisholm.

Then, Steve Gerard, husband of Mercer's niece Nancy, modeled the items while being photographed from all sides and measured by Chisholm and her brother Daniel. Not only did she have to measure everything from the length between buttons, but Chisholm also managed to track down an authentic, historically accurate New York City fire hydrant, which she was able to use during the modeling process, and which still sits in her studio.

Despite such extensive efforts, there was one change made while translating the image from two dimensions to three - rather than looking down to read the paper, Mercer is now looking up to greet passersby with a smile.

While there's very little risk of Mercer's likeness walking away, the bronze statue will need some regular maintenance, including reapplying the protective patina that keeps the statue from getting spots or turning the surreal shade of green seen on many historical bronze sculptures that have been exposed to the elements.

He is best known as a Tin Pan Alley lyricist, but he also composed music. He was also a popular singer who recorded his own songs as well as songs written by others. From the mid-1930s through the mid-1950s, many of the songs Mercer wrote and performed were among the most popular hits of the time, including "Moon River", "Days of Wine and Roses", "Autumn Leaves", and "Hooray for Hollywood". He wrote the lyrics to more than 1,500 songs, including compositions for movies and Broadway shows. He received nineteen Oscar nominations, and won four Best Original Song Oscars.

It's a fabulous depiction, Steven, especially from the side view. Thanks for showing both angles.

thank you for sharing these explanations
Beautiful sculpture

A beautiful sculpture. A smilemaker!

super cool at any angle!

a nice result from all the painstaking research by Susie and you :)

I like the relaxed pose. I appreciate seeing it from both angles.

She sure did a great job on this. It looks so real...from all angles.

What if firefighters need access to the fire hydrant?
Johnny Mercer leaves where he is, and goes to sit in one of the chairs?
:-P
Jokes aside, is a beautiful tribute.

An impressive story of an interesting image.
It took a lot of work and hours.
Beautifully displayed on your photos

i don't think i've ever seen a happy statue

nice statue and story. I am impressed the the casting process can create such thin and barely connected parts like the newspaper. knowing southerners, I am surprised that they allowed a NYC fireplug was allowed in the city.

Oh dear! Somehow we missed this when we were there - what a terrific statue, and story! Thanks for providing two angles to give us a more full view!

A beautiful statue. I really liked learning how this statue was created. He wrote some really popular songs.