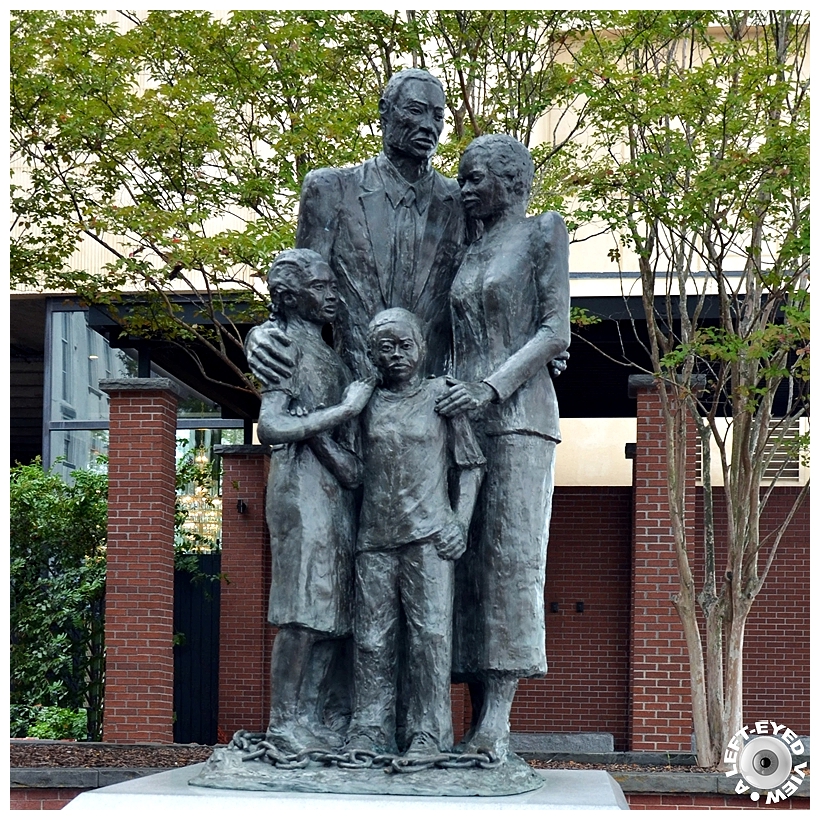 Posted by Steven (Chicagoland, United States) on 8 January 2020 in Art & Design and Portfolio.

Erected in Rousakis Plaza along River Street, Savannah’s African-American Monument honors the contributions of its black citizens to its history, economy and culture, and acknowledges the city’s role in the institution of slavery.

It represents an important step forward in the inclusion of slavery and the black experience in Savannah’s public monuments, and a reminder of the many contributions made by the enslaved people by whom much of Savannah, literally and figuratively, was built.

The City of Savannah publicly acknowledged its involvement in the institution of slavery in 2007, five years after the African-American Monument was unveiled. That same year, a second memorial to the black contribution to Savannah, the Haitian Monument, was unveiled in Franklin Square.

The African-American Monument was designed by Savannah artist Dorothy Spradley. Standing nearly 11 feet tall, with a granite base, it depicts, in bronze, a family of four African-Americans in modern dress, standing together with broken chains around their feet.

The figures are positioned to face towards Africa. They face also towards the Savannah River and the Atlantic Ocean, upon which they were shipped as chattel to their new fates and what would become their new country.

This sculpture is really magnificent and your note very interesting. Thank you so much Steven

It is great that such a monument has been built. The unfortunate thing is that the slave trade is not over. It's just better hidden than before.

FINALLY...the recognition! God have mercy on us all.

The sculpture reminds us peacefulness.

A great look at this sculpture Steven.

Finally the recognition of their pain !

what a a poignant tale you have narrated ! Fantastic capture of the sculptures.
Thank you for sharing Steven

Despite the broken chains they don't look happy, though at least gross injustice has been publicly recognised. Well captured

I can feel their strong emotions. A well cast sculpture.

Fine figures and a signicant comment make this important.

A beautifulimage of this superb sculpture !!

This is another interesting Savannah monument.

This is such a great sculpture...I had it open on my phone and wanted to wait and see on computer.

I am not qualified to criticize art, especially art depicting the Black experience, but... (why does the "but" disclaimer always precede someone making an ass of himself?). Okay, I won't.

A important sculpture.
That whe the slavery not forgotten.

Beautiful sculptures and a great monument. And interesting information. :)

So very sad.... but a beautiful memorial... and an important one. Thank you, Steven.

The symbolism of the figures positioned to face towards Africa, was very well thought out.
Lovely tribute.

These are very important pieces of work.