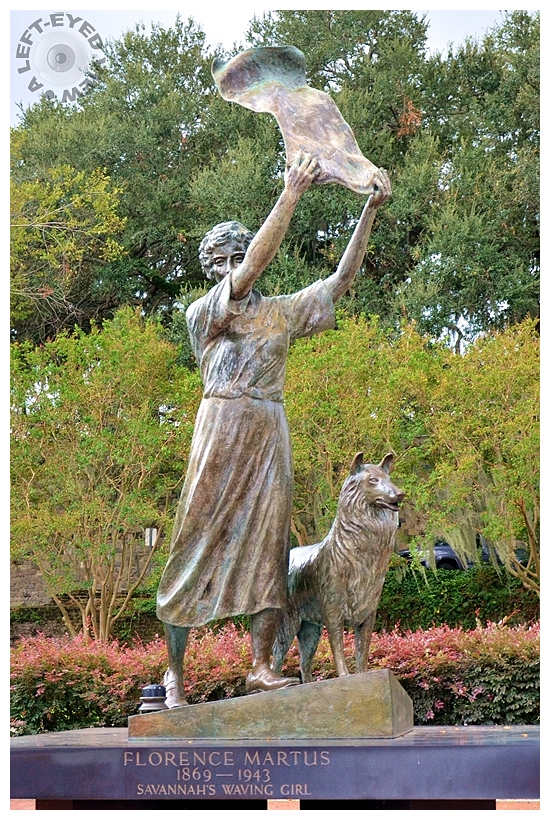 Posted by Steven (Chicagoland, United States) on 14 January 2020 in People & Portrait and Portfolio.

Florence Martus (1868–1943), also known as "the Waving Girl", took it upon herself to be the unofficial greeter of all ships that entered and left the Port of Savannah, Georgia, between 1887 and 1931. A few years after she began waving at passing sailors, she moved in with her brother, a light keeper, at his small white cottage about five miles up the river from Fort Pulaski. From her rustic home on Elba Island, a tiny piece of land in the Savannah River near the Atlantic Ocean, Martus would wave a handkerchief by day and a lantern by night. According to legend, not a ship was missed in her forty-four years on watch.

This statue of Martus by the sculptor Felix de Weldon is erected in Morrell Park on the historic riverfront of Savannah.

This statue is really superb. I appreciate very much the explanatory note which accompanies your photo, it allows to know a little more about the History of America and South America.

Lovely sculpture with her dog.

An interesting and even funny history is on this statue.

Excellent image and great to hear about Florence Martus.

we get the odd person over here who takes it upon themselves to direct traffic :) A slightly bizarre story, but how nice to have a sculpture commemorating it. Your usual excellent combination of photo and documentary info

Beautiful sculpture of Waving Girl with her dog. And interesting information. Excellent. :)

Florence and her dog.
Is that a lassie?

I love the sculpture....love the dog part, too. And I like the story.

I remember this wonderful sculpture and her story.

Clearly it was a woman with a huge fascination with boats.
When we do what we really enjoy, no task is bad.

Didn't know her before, now I am more informed, nice statue.

Beautiful framing of the statue . You mean she was there for every boat ...?

What a wonderful story! I am glad that a statue was created in her honor. A beautiful image!

A dedicated greeter for sure! Lovely capture of the sculpture.

nice documentation of this statue, both the photo and the history. the sculptor has an odd interpretation of the handkerchief she is waving. and who doesn't love a dog.