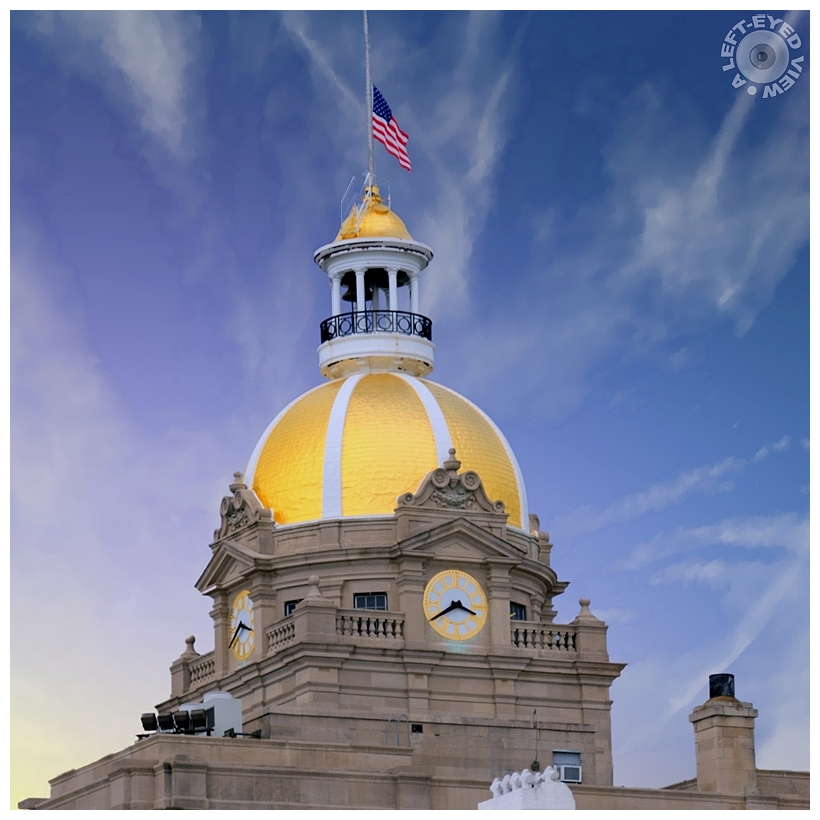 Posted by Steven (Chicagoland, United States) on 16 January 2020 in Architecture and Portfolio.

Savannah City Hall is the first building constructed by the citizens of Savannah expressly and exclusively to serve as the seat of municipal government. Opened on January 2, 1906, it has served continuously in this role since that date. City Hall was preceded on this site by the City Exchange, built in 1799 and razed in 1904. Along with municipal offices, the City Exchange housed the custom house, a post office, and newspaper offices. City Hall was designed by Savannah architect Hyman W. Witcover and built 1904-1905 by the Savannah Contracting Company during the administration of Mayor Herman Myers. It is a Renaissance Revival structure of granite and limestone exterior. The original copper dome was first gold leafed in 1987.

Photo captured October 7, 2019 while passing by on the Georgia Queen.

A pretty and decorative dome.

Valuable looking. Is it gilded

Excellent capture of the dome Steven. The Boston State House has one similar to this one.

It's fantastic a great photo with beautiful colors and details.

I think they should have stuck with the copper myself, the gold leaf is a tad lurid in contrast to stonework. Well captured though

It is a beauty! I want to think and go look for more pics...wondering if that dome might have used to be copper. The one in Terre Haute was copper and had all that patina that comes with copper. A few years ago they painted it gold...and I always wonder why they changed cause I bet there was a reason.

Wonderful image against a lovely sky..I love that golden dome especially !!!And thank you for the History :)))

What a majestic feel

A lovely dome that must have been the source of civic pride.

A great looking dome and clock tower made richer with the colorful top.

another fine architectural shot with excellent color and detail... and of course your always flawless perspective

Now that I see this, Steven, I remember it! How could one ever forget that color!

What a great dome on the hall !

The gold coating has made this dome gorgeous! I suspect the copper didn't look half bad either...

the dome of the building has probably been redecorated recently, it is absolutely superb

Groovy! I was not able to get in to comment x 1 week.
I hope you are well; the photo is a delight as always.

This is a gorgeous building. I love the yellow! Great history and information. The sky really accentuates the yellow.

A stunning image, Steven! Beautifully done! I didn't get anything near to this good, our skies were gray on our visit...

How come the flag is flying at half mast?

Wow. The yellow really seems to glow against that vibrant blue background.