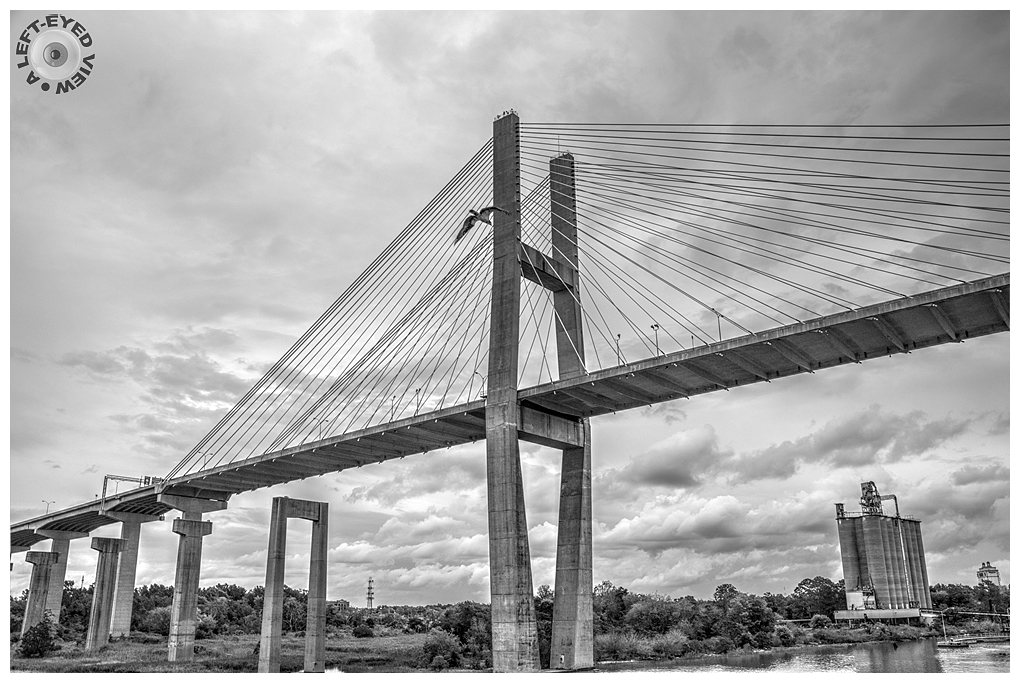 Posted by Steven (Chicagoland, United States) on 23 January 2020 in Transportation and Portfolio.

The Talmadge Memorial Bridge is a bridge spanning the Savannah River between downtown Savannah, Georgia and Hutchinson Island. The original bridge was built in 1953. A replacement bridge was completed in 1991, also referred to as the Talmadge Memorial Bridge. The original Talmadge Bridge was a cantilever truss bridge built in 1953. It eventually became a danger for large ships entering the Port of Savannah, home to the largest single ocean container terminal on the U.S. eastern seaboard, and the nation's fourth-busiest seaport. A replacement bridge able to not impede maritime traffic was completed in March 1991. The new Talmadge Memorial Bridge is a cable-stayed bridge.

The structure is dedicated to Eugene Talmadge, who served as the Democratic Governor of Georgia in 1933-37 and 1941-43. The replacement bridge was originally suggested to be named for the Native American Creek leader Tomochichi, an important figure in Savannah's founding in 1733. After public forums on the issue, the original name was restored for the new structure.

Photo taken while riding on the Georgia Queen on October 7, 2019.

Lovely shot of this beautiful bridge..Thank you for the history too.
I wonder what the bird is doing here ! It looks lovely, breaking the monotony :)))

Superb composition and bw process. I like diagonal of this framing

a nice monochrome with the diagonal of the bridge and the "ropes" which form beautiful lines of flight
The bird, he very well chose to go there at the right time

The B&W is a super choice ! I like too this passing bird.

Nice angle of view and good in BW ! I like the bird in your composition !

Love if this, great shot

Superb B&W composition with this beautiful impressiv bridge and the silos .

Great moment with the bird, looks like it is part of the bridge

Superb point of view. The monotone is a perfect choice to show off the details

I wonder was the bird a happy accident or were you going for a photo with it in it? Whatever the case, this is a great image. And I love that you gave the B&W version.

Great picture from the bridge.
The bird gifs makes him special.
Thanks for the interesting explanation.

Great shot of the bridge, and the bird is extra special.

fine view of the bridge and nice black & white tones. A fraction of a second later and that gull would have been in open sky.

A beautiful composition. I love how you captured the bird flying in front of the bridge. A fantastic point of view. I like the black and white.

All of the above comments...and now I'm wondering about those bridge supports that are doing nothing but standing there???? Will they just stand there like that forever?

Terrific shot of this graceful bridge! I love the B&W & the BIRD!