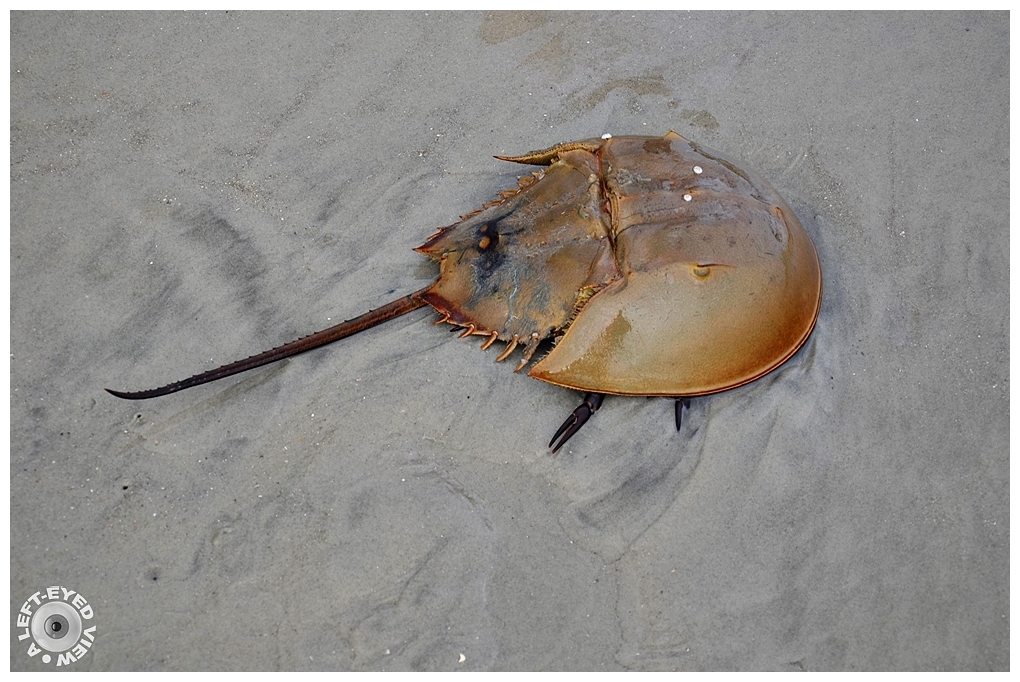 Posted by Steven (Chicagoland, United States) on 29 January 2020 in Animal & Insect and Portfolio.

Horseshoe crabs have been around for more than 300 million years, making them even older than dinosaurs. They look like prehistoric crabs, but are actually more closely related to scorpions and spiders. The horseshoe crab has a hard exoskeleton and 10 legs, which it uses for walking along the seafloor.

The body of the horseshoe crab is divided into three sections. The first section is the prosoma, or head. The name “horseshoe crab” originates from the rounded shape of the head, because just like the shoe on a horse’s foot, the head is round and U-shaped. It's the largest part of the body and contains much of the nervous and biological organs. The head has the brain, heart, mouth, nervous system, and glands—all protected by a large plate. The head also protects the largest set of eyes. Horseshoe crabs have nine eyes scattered throughout the body and several more light receptors near the tail. The two largest eyes are compound and useful for finding mates. The other eyes and light receptors are useful for determining movement and changes in moonlight.

The middle section of the body is the abdomen, or opisthosoma. It looks like a triangle with spines on the sides and a ridge in the center. The spines are movable and help protect the horseshoe crab. On the underside of the abdomen are muscles, used for movement, and gills for breathing.

The third section, the horseshoe crab’s tail, is called the telson. It's long and pointed, and although it looks intimidating, it is not dangerous, poisonous, or used to sting. Horseshoe crabs use the telson to flip themselves over if they happen to be pushed on their backs.

Very original crab I think I have not seen. Beautiful photo Steven

Unbelievable, Steven, when you read about it like this. Lucky you to have found such a perfect specimen!

Interesting animal. Thanks for the thorough description

The description is as interesting as the picture. Extra nice post!

Yes, I look forward
And thanks for the information !

Beautiful close up of the details

Never seen this fellow !
Thank you for all this history..and a great capture here :)))

First of all this is a great beautiful photo.
Your explanation of the crab is fantastic, what an interesting story.
I read it with a lot of interest.
Thanks for sharing.

Oh horseshoe crabs can be found in America's cold seashores too?
We have them in tropical warm water in Malaysia too.

Do you also have mudskippers? They are also very common in my home country.

this looks like a nice specimen; most of the ones I have seen have been washed up fragments

A gorgeous image of the horseshoe crab. I saw a documentary on them and how their blood is used for testing for endotoxins. It was quite interesting.

Oh yes, I would certainly be cautious walking here.

They are amazing animals.
Excellent level of detail.

Stunning. Amazing details in this closeup. And interesting information about this horseshoe crab. :)