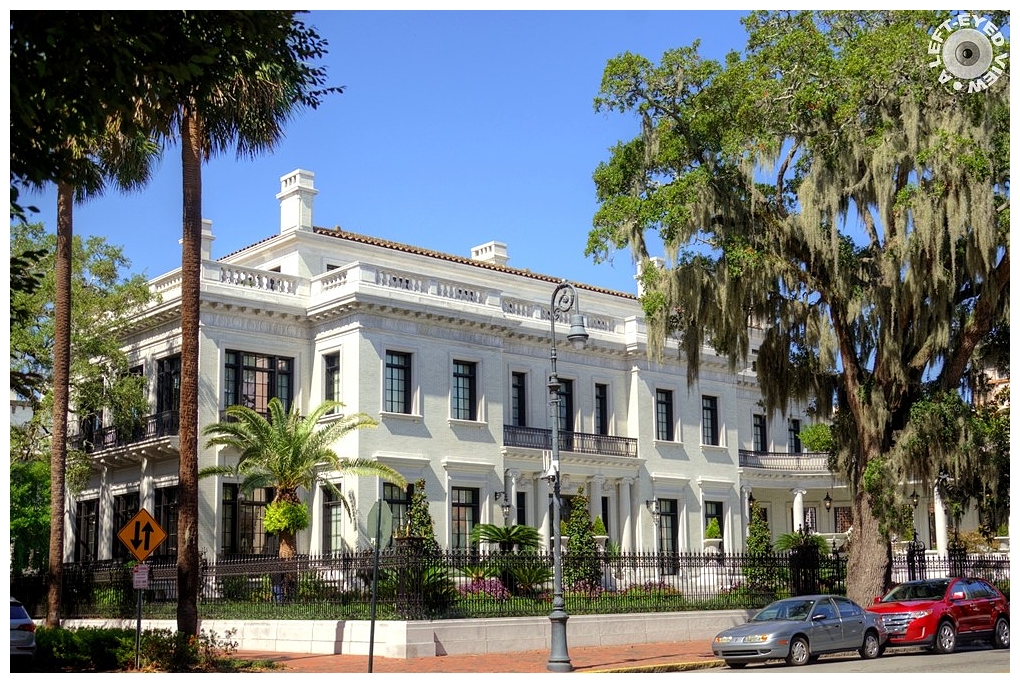 Posted by Steven (Chicagoland, United States) on 5 February 2020 in Architecture and Portfolio.

The Armstrong House is a nationally significant example of Italian Renaissance Revival architectural style located in the Savannah Historic District. The structure was built between 1917 and 1919 for the home of Savannah magnate George Ferguson Armstrong (1868–1924). It was owned by the Armstrong family from 1919 to 1935. Afterward, the structure and grounds served as the campus of Armstrong Junior College. Threatened with demolition, the Historic Savannah Foundation purchased the Armstrong House along with five other threatened historic buildings from the College for $235,000 in 1967. Once saved, Historic Savannah Foundation then sold the House at the exact purchase price to preservationist and antique dealer Jim Williams who restored it as his home. Eventually, both were sold to a major Savannah law firm as offices. Six city lots were acquired to build the Armstrong mansion, and two existing houses were demolished to make room for the 26,000 square foot structure. The entire site, including carriage house and grounds, is 0.5 acres.

The Armstrong House setting has appeared frequently in popular culture. The house was used as the school of the daughter of the protagonist in Cape Fear, the 1962 psychological thriller starring Robert Mitchum, Gregory Peck, Martin Balsam, and Polly Bergen. The house also appeared as the real-life law office of attorney Sonny Seiler in the film Midnight in the Garden of Good and Evil, a 1997 American crime drama film based on novel by John Berendt and directed by Clint Eastwood.

What magnificent house! I love this style of architecture and your note very interesting

What a lovely image here ! Great details..beautiful framing :))
Thank you for the history :))

I sure am loving to see everything through your eyes, Steven, much of which I did not see while there a few years back.

That house has great history. It is fine that you told it to us. Great house.

Interesting history of this wonderful building.

This is a beautiful building, very chic and the light is spectacular!

A imposant and fantastic architecture .
Great picture from this house .

What is this a beautiful and imposant building

It is a handsome, huge place.

Is it possible to see what's inside this grand building any time of the year?

A notable building and an interesting history.

What a great story for this building, magnificent architecture

an absolutely gorgeous structure and you've photographed it beautifully

Beautiful house with a lot of history.

another nice view of this distinguished architecture. I find it surprising that you separated the two views of the same place.

This is a huge house. I cannot imagine how many bedrooms it must have. The architecture is beautiful. It has been nicely preserved.

Magnificent building and beautiful architecture. Excellent composition. Thank you for the very interesting and detailed information.

The classic style is always beautiful. It's timeless.
A great image!