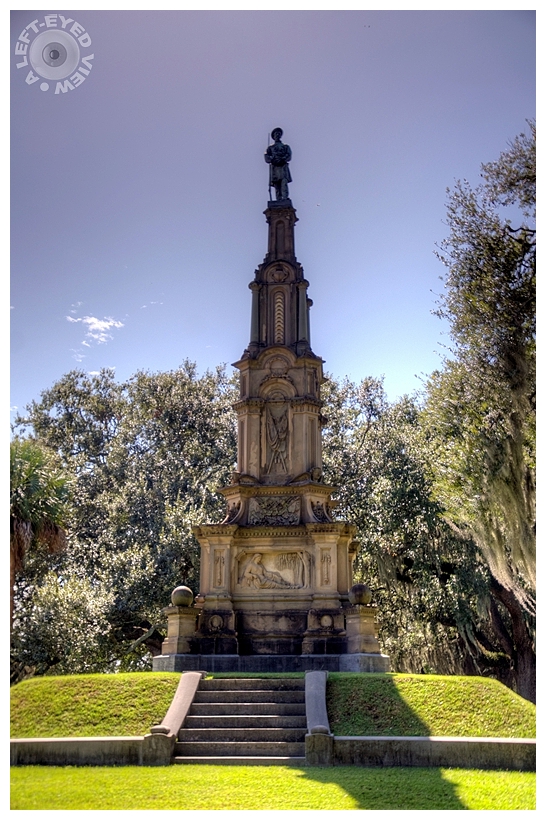 Posted by Steven (Chicagoland, United States) on 12 February 2020 in Art & Design and Portfolio.

A bronze soldier in a Confederate uniform stands atop a sandstone base, facing north, which was a long-standing tradition of placing a statue to face his enemy. The base was made of Nova Scotia sandstone and was brought to Savannah by ship. The monument features a raised relief carving depicting a grieving widow sitting under a weeping willow tree and is surrounded by 4 winged angels.

Because the monument faces north, it was fairly shady from this point of view. Processing in HDR helped reveal some additional detail. Photo captured October 8, 2019.

Thank you again for sharing your item's history. It adds interest. The picture is fine.

It is a great and beautiful tribute to the men of the south who fought for a lost cause. This period of American history is touching and sad, it has made many French people dream of it through all the films that have been made and exported to us.

So beautifully shown to us, Steven. And I'm very glad it is of a soldier and NOT of the Confederate Generals!

Beautiful composition with this monument recalling the Civil War and I am impressed that tradition places the sculptures in front of the geographical situation of the enemy...

Interesting history of how it came to be and the restrictions.

What a great statue and memorial to see and read.

excellent capture and fine processing of the light

Beautiful image of this monument. Excellent composition and detailed information of the monument. :)

mE from Middle Franconia, near Nürnberg, Germany

Confederate monuments are a source of great discord today. This one, funded so soon after the war, seems like a true tribute to the war veterans and casualties. So many were erected in the 1890s and early 1900s, as least as much to flaunt and further Jim Crow as to memorialize. So it is a fraught subject to share, even when done in a pure documentary style.

This is a beautiful and very large monument. I wonder what is thought of it today. It has been there a long time.

All of the beautiful old monuments get a bad rap today.

@B. Thomas: It just dawned on me that I posted this on Abraham Lincoln's birthday. :-)

Very important picture from the monument.

it's a very tasteful memorial

Beautiful sculptural piece.
But I bet there must be some grain of sand from the north.
;-)

It's a stark reminder... excellent image.

You could almost use this as a shadow clock - sundial ;-)