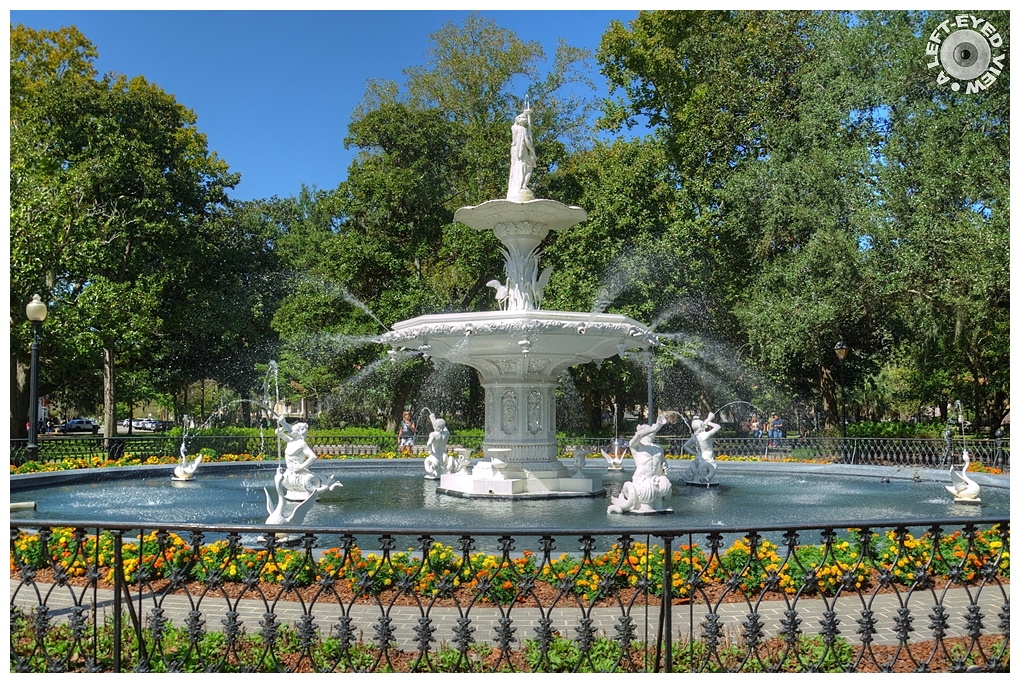 Posted by Steven (Chicagoland, United States) on 13 February 2020 in Cityscape & Urban and Portfolio.

France, at that time, was a nation much admired by Savannah’s elite. When the city decided, in the late 1850s, to improve its new park, it did so with French parks and squares, as well as the idea of the boulevard-promenade, in mind. Inspired by the example of the fountains of Paris, Savannah resolved to obtain a fountain of its own for Forsyth Park, which would serve several purposes.

First, the water and its spray would provide a much-needed cooling factor during hot summer afternoons in the park. Second, it would serve as a decorative centerpiece for Forsyth Park in keeping with the then-emerging fashion for large items of ornamental ironwork as aids to domestic and civic beautification. Third, the fountain would provide a terminal focus of the Bull Street boulevard, of which the main path through Forsyth Park provided a continuation.

In March of 1858, Savannah’s council selected a committee to choose a suitable fountain to complement the other improvements planned for the park. The structure they chose was an ornate, cast iron fountain, its two tiers topped by a figure of a robed woman holding a staff. The basins are decorated with a relief leaf pattern, the upper tier more elaborately embellished with a scene of wading birds and rushes reminiscent of Georgia’s lowcountry landscape.

The fountain, as originally designed and installed, incorporates four spouting triton figures carrying shell horns (representing the mythological Greek messenger of the sea, half man and half fish), positioned on blocks at the immediate base of its lower pedestal. These have since been repositioned in the basin.

Brick paving, possibly to cut down on mud from wind-blown water, was installed around the fountain in 1860, and its ornamental perimeter iron railing within the next decade. The spouting swans in the basin and the urns at the pedestal base were added in 1870.

The fountain’s characteristic spray effect dates from 1873, introduced then as a water conservation measure. For many decades the fountain ran only in the afternoons, as it lacked a recirculator that made it reasonable to run it all the time without excessive water wastage. Full time operation of the fountain awaited the installation of a recirculating pump, added at some time around the 1930's.

After getting to the fountain, I was happy to find the right angle to capture this fountain with the sun behind me. :-)

Interesting story from this fountain.
A beautiful photo.

It is really gorgeous

Very pretty this photo in the colors of summer. It's nice to see flowers and water under the sun.

Yes nicely captured and comprehensive historical info to go with it

This is a lovely fountain.

Beautiful style of fountain in a superb sunshine day !

A very interesting history here..
A lovely image here..Love the way you have captured the water spurting here :))

what a stunning fountain and so beautifully captured

A well capture image, Steven... And a well thought out design of the fountain... :)

Very beautiful photo of this fountain . Thank you for the History .

This is a wonderful photo tour you are giving us, and interesting history to go with it.

The marigolds add more colours to the fountain.

very nice wide view. it might be fun on shots like this to experiment with shutter speed, to see whether a blurred stream of water from some of the sources would also be an interesting photo

This is a gorgeous fountain. I love the sculpture and the water sprays. It is beautiful.

All of these images from this series, Steven, would make an incredible tourist brochure, seriously, Steven!

Also in this photo the whiteness of the fountain is highlighted.
Lovely!

what a decorative fountain this is, such wonderful details and lovely colors

I love to see green contrasted against a blue sky.

What a wonderful photo of this beautiful fountain! I remember staring at it for a long time when I was in Savannah... and as you've featured the past week, looking at every piece of it!