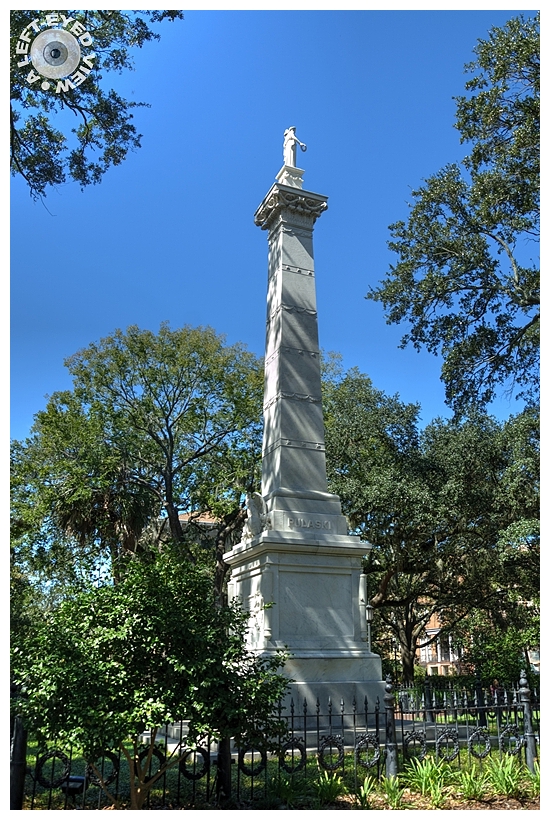 Posted by Steven (Chicagoland, United States) on 24 February 2020 in Art & Design and Portfolio.

Located in Monterey Square, the Pulaski monument is made from Italian marble, with smaller elements of granite. It is 55 feet tall. The monument has a bronze bas relief of mounted Pulaski, and is topped with a statue of Liberty, with the stars and stripes banner. The monument was designed by Robert Launitz. The bas relief was designed by Henryk Dmochowski, and shows the moment of Pulaski's death. Additional elements present on the monument include the coat of arms of Poland and the coat of arms of Georgia.

While in France, Pulaski learned of the American Revolution from Benjamin Franklin, who was in France to appeal to the French government for military and financial assistance in war against the British. Pulaski sympathized with the patriot forces fighting for independence, and in 1777, he sailed to America with a letter of introduction from Franklin. He joined George Washington’s Army at the Battle of Brandywine. Following the battle, Washington and the Continental Congress promoted him to brigadier general and “Commander of the Horse.” Pulaski went on to serve at the Battle of Germantown and spent time with the Continental Army in Valley Forge, Pennsylvania, during the winter of 1777-78.

In December 1778, the British captured the City of Savannah. Washington sent Pulaski and his cavalry unit, known as the Pulaski Legion, south to help liberate Savannah from British occupation. Joining the Continental Southern Army in 1779, the Pulaski Legion participated in the Siege of Charleston. By mid-September the Pulaski Legion traveled with General Benjamin Lincoln to retake Savannah. During a cavalry charge on October 9, 1779, Pulaski was mortally wounded by a grapeshot. For his role in the American Revolution, Pulaski is honored around the United States. He was also granted honorary American citizenship in 2009, one of only seven individuals to receive this honor.

So much history, so little time! So glad these statues capture it all, Steven.

thanks to you I regularly learn a little bit more about the history of your country
Photography is very successful. I really like the angle of view that gives an aspect of grandeur to this monument

Right tribute for this brave man.

What an elegant monument/obelisk.
Fine to read the history

Interesting story from this great monument.

Excellent image of this statue. I like the capture of the shadows.

I recently heard about him in a history course on Eastern Europe.

I am sort of speechless...anything I start to say just doesn't express how I feel...feel dumb for never having heard of him. Feel like what a man to come and fight for our freedom. Like I say...just feels inadequate.

Just thought, we have a Pulaski Country and also we have this Jasper-Pulaski wildlife area where we go see Sandhill Cranes. I bet they are named after him.

Thank you for that detailed information..
Love this image..nice play of shadows here :))

love the light and shadows

I lilke this imposing point of view

George Washington? I visited a little village called Tring a couple of months ago.
His great grandparents came from there.

nice to find a tribute to Pulaski in a southern city. your home, Chicago, is a big Pulaski fan

With such high pedestal, the statue could be bigger, to have more prominence.
They were spared on the statue, but not on the pedestal.
:-)
Beautiful green surroundings.

The peak really stands out against those blue skies.