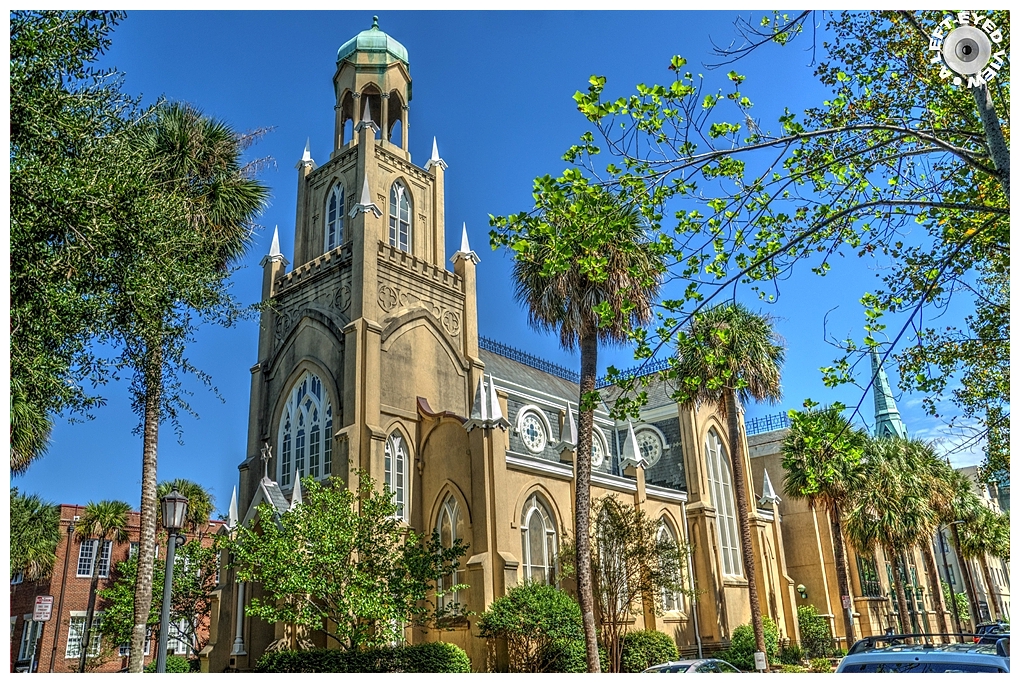 Posted by Steven (Chicagoland, United States) on 5 March 2020 in Architecture and Portfolio.

The oldest Congregation now practicing Reform Judaism in the United States, Mickve Israel was founded by a group of Jews, mainly of Spanish-Portuguese extraction, which landed at Savannah, July 11, 1733, five months after the establishment of the Colony of Georgia.

The Congregation was incorporated in perpetuity by a special Act of the Georgia Legislature on November 20, 1790. After having worshipped in various temporary quarters for almost a century, in 1820 the Congregation built its own Synagogue - the first in Georgia - at the northeast corner of Liberty and Whitaker Streets. The Synagogue pictured here was consecrated on April 11, 1878.

In 1789, the Congregation received a letter from President George Washington which stated in part: "May the same wonderworking Deity who long since delivered the Hebrews from their Egyptian oppressors, planted them in the promised land - whose providential agency has lately been conspicuous in establishing these United States as an independent nation - still continue to water them with the dews of Heaven, and to make the inhabitants of every denomination participate in the temporal and spiritual blessings of that people whose God is Jehovah."

Beautiful building and interesting note. We learn a lot about your country thanks to your pictures and the explanations you give.

Monumental building, I love this kind of architecture.

Beautifully captured building with an interesting combination of architectural styles

This is just beyond words...so beautiful. And I love the letter from George Washington.

A fine picture of this famous place and even more interesting history.

A great capture of this famous place. Excellent presentation. And interesting information. :)

a beautiful church with nice hdr processing. i can appreciate how you must have bent and stretched to exclude most of those cars parked in your line of sight

OMG, Steven. I had no idea about ANY of this. Thank you so much for sharing this. I'm really getting my education today!

It's a building that is reminiscent of gothic churches, but in this case much more refined.
Great capture.

This is a magnificent Synagogue. The architecture is gorgeous. It looks nothing like the Synagogues that I see in my area. Beautifully photographed.

What a really great church building

Hello Steven,
This Church is truly impressive. Thank you for sharing with us each time beautiful images with explanations

the palm trees always surprise me

Thais is a beautiful building! I love your angle and color!

what a majestic building; you captured it well.