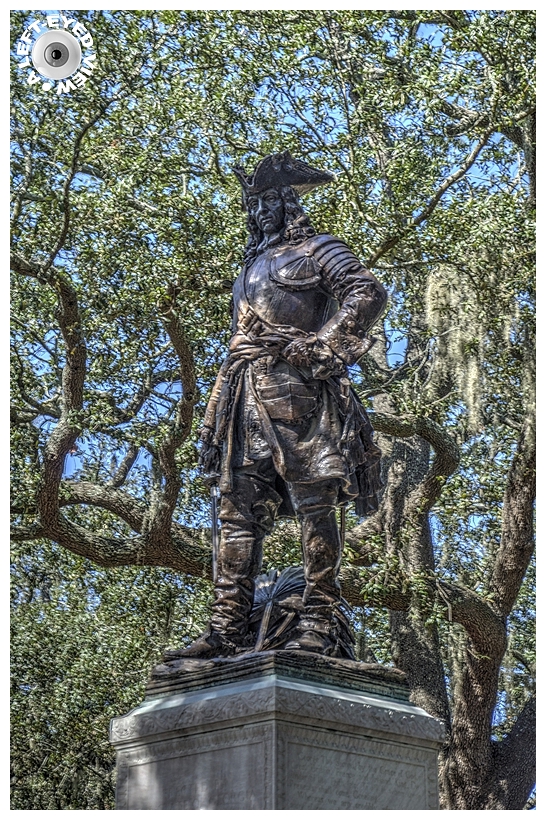 Posted by Steven (Chicagoland, United States) on 11 March 2020 in Art & Design and Portfolio.

A close-up of the statue of James Oglethorpe in Chippewa Square. Due to the constraints of the shade cast on the statue, I processed in HDR so that the facial features could be seen better.

Read from a plaque within Chippewa Square:

"The monument in this Square to James Edward Oglethorpe, the great soldier philanthropist who founded the colony of Georgia, was erected by the State of Georgia, the City of Savannah and various Patriotic Societies. Impressive ceremonies marked its unveiling in 1910.

The nine-foot bronze statue of Oglethorpe in the work of one of America's foremost sculptors, the celebrated Daniel Chester French. He has depicted the Founder of Georgia in the full dress of a British general of the period. Oglethorpe is portrayed with sword in hand; alert and ready for council or action. At his feet is a palmetto frond. The statue faces southward symbolizing the threat of Spain's imperial ambitions to the young colony.

The pedestal and base of the monument were designed by Henry Bacon, the eminent New York architect whose collaborations with Daniel Chester French include the Lincoln Memorial. The four lions at the corners of the lower base hold shields on which appear, respectively the coat of arms of Oglethorpe and the great seals of the Colony of Georgia, the State, and the City of Savannah. On the pedestal of the monument is carved a portion of the text of the charter which was granted by Parliament in 1732 to "the Trustees for establishing the colony of Georgia in America."

Superb statue and soldier. I like south american story

Well done, Steven, to make the features of this statue stand out so perfectly.

Great editing for this statue.

Beautiful framing of the statue .

I am glad you used HDR. The expression is worth seeing.

the artistry of statues always amazes me. i'm struck by the amount of clothes his uniform involves. seems like they would be cumbersome.

He has a good face, I think.

A marvelous statue of this famous individual.

The statue looks even grander against the backdrop of trees.

This is a magnificent statue. I appreciate the interesting narrative that you included. It is very interesting information.

The conditions really weren't ideal for the photo. But you did a good photo processing.