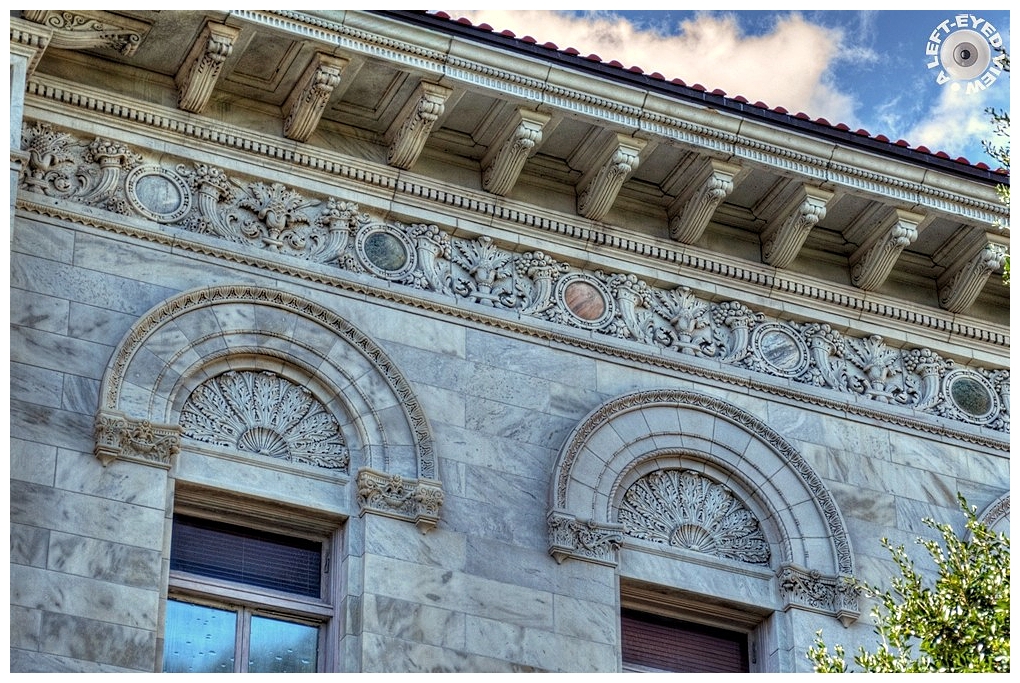 It's in the Details

Posted by Steven (Chicagoland, United States) on 19 March 2020 in Architecture and Portfolio.

The Tomochichi Federal Building and U.S. Courthouse's exterior ornamentation, both that executed in marble on the original portion of the building and the terra-cotta detailing on the extension, is rich and varied. Motifs relating to nature—including flowers, animals, and fruit-are incorporated into the frieze (the carved band below the eaves) alternating with medallions of variously colored marble. Similar motifs are repeated above certain windows and at the bases of the main entrance arches. I was impressed with the dentils, brackets, detailed motifs and medallions which I highlight here.

Superb details and framing. Congratulations to the photographer and to all the artists who have engraved these marvels.

Style in decorative, but expensive kind.

You can really see the delicate details.

excellent capture of the embellishments

YOu have brought out the beautiful details so well.

A fine capture of the special art work in buiding this building.

The detail of the frieze and above the windows is stunning. This is a gorgeous building.

It is very beautiful !!

The details are elaborate and beautiful. I enjoy this image of great clarity.

And it really is...the details are marvelous. I always wonder just how long adding all the details takes.

ha ha - I think your caption echos my earlier comments. the window arches and especially that carved border are shown in exquisite detail

I just love the marble at the top!!

I love the lines and angles in this photo. It looks like a postcard.

WOW, Steven. It's definitely in the details!

Waaauw...what a details
The longer you look, the more you see !

With a good lens you can get great details from afar

Beautiful details.
The medallions that you mentioned, remind me of planets.

EXCELLENT. I love the reflection on the window.

yes, the detailing is amazing and in this age of driving past, most likely goes unseen by most