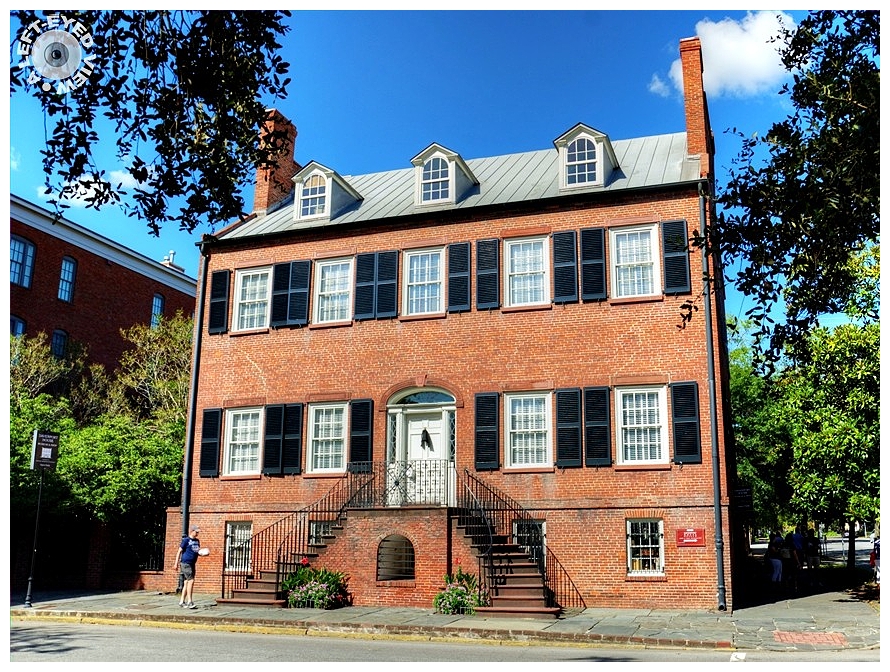 Posted by Steven (Chicagoland, United States) on 23 March 2020 in Architecture and Portfolio.

The Isaiah Davenport house, built in 1820, is a historic home in Savannah, Georgia. It has been operated as a historic house museum by the Historic Savannah Foundation since 1963. The house is located at 324 East State Street, on the northwest corner of Columbia Square.

The 1820 Federal-style dwelling was built by upwardly mobile artisan Isaiah Davenport and his crew for his growing household, which included his wife, ten children, and nine slaves. It was his family home until his death in 1827 when his wife, Sarah Clark Davenport, converted it into a boarding house. She lived in the residence on Columbia Square until 1840 when she sold it to the Baynard family of South Carolina. The house remained in their hands for the next 109 years.

As time passed, the once stately home in a fashionable neighborhood became a rundown rooming house in a seedy part of town. Even in an advanced state of neglect, New Deal surveyors recognized the architectural significance of the home when they identified and measured it for the Historic American Buildings Survey in the 1930's. Threatened with demolition in 1955, a group of community-spirited citizens joined forces to purchase the Davenport House. This was the first act of the Historic Savannah Foundation, which has gone on to save hundreds buildings in the historic city through its renowned revolving loan fund and other historic preservation activities. In 1955, the Davenport House became the office for Historic Savannah Foundation as well as a family services agency. In 1957, Savannah Landscape Architect Clermont Huger Lee prepared a period specific landscape plan and wall detail for the garden, later revised by others. Sensing the potential for a historic site, the first floor of the house was restored and opened to the public as a museum on March 9, 1963.

Years later the second and third floors were opened and Historic Savannah Foundation moved its offices to another building. Beginning in the mid-1980's, leaders of the museum began an effort to adhere to professional museum standards. In the mid-1990's, the museum began a re-restoration process, which resulted in a more authentic experience for museum visitors, including period wallpaper and period room furnishings which reflect the inventory taken at the time of Isaiah Davenport’s death in 1827.

Lovely and elegant house. Thank you so much by the interesting note.

I remember taking a tour of these stately homes, Steven. Savannah is so rich in its history! I love how I'm seeing it all again through your eyes!

It fascinates me to see a fine house of this era in brick. Where I live, most of the houses of this date are built of stone

Looks so well restored it could have been built yesterday. Nicely captured

A fine building Steven. There are a few houses like this in the old part of Bristol in the U.K.

What a beautiful stately home this is.
You are good at architectural photography

The bricks are similar to the materials in North Germany. Nice building!

It sure is a stately home...I enjoy reading the information you give about these places.

A beautiful old house with that long history. An excellent image.

the double staircase is an elegant feature; it looks like it is about to receive a delivery

A lovely home with quite a history. I am really glad that it was saved and renovated.

I really love this house... when we were there, it was all decked out for Thanksgiving! Lovely!

The house has a lofty entrance. Only those who have good knees and legs enter it.
:-)
I love the brick houses.

i love the architectural style

I imagine the stories those walls must hold.