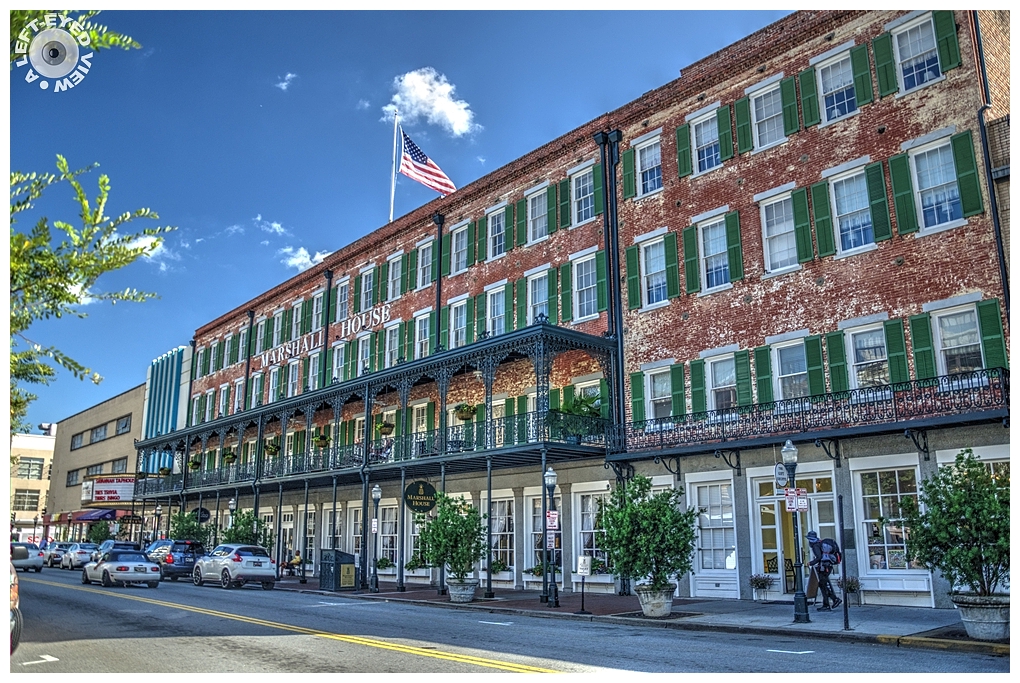 Posted by Steven (Chicagoland, United States) on 26 March 2020 in Business & Industry and Portfolio.

During the railroad boom of the 1840's and 1850's, Savannah doubled in size and population. Seeing a real need for accommodations and housing, business woman Mary Marshall developed several properties in Savannah, most notably the iconic Marshall House hotel in 1851. Mary Marshall and her estate leased and collected rents from The Marshall House until 1914.

The hotel’s colorful history spans 167 years, and includes roles as a hospital during the Yellow Fever Epidemics in the mid-1800's, and as a Union hospital during the final months of the Civil War. How ironic that hotels in Chicago are now converting their empty rooms into rooms for COVID-19 patients.

The Marshall House was also home to Joel Chandler Harris, author of the famous Uncle Remus Stories during the Reconstruction Period. For economic and structural reasons, The Marshall House was closed in 1957. The 2nd, 3rd, and 4th floors were abandoned, but the ground floor was maintained for various shopkeepers and stores until 1998.

In 1999, The Marshall House was extensively restored, and once again became a Savannah fixture. Great efforts were taken to ensure the hallmarks of the historic hotel were preserved or recreated, including the Philadelphia Pressed Brick on the façade and the Savannah Grey Brick throughout, original staircases (some of the spindles and accents have been recreated), original wood floors, fireplaces, brick walls, the doors to each guest room, and several clawfoot tubs dating back to 1880. The veranda and gas lights were reproduced in the likeness of the original features. The Courtyard Atrium was encased with a glass ceiling to give a sense of the area’s previous use as a courtyard. Artifacts found during the restoration are encased in display cabinets on the second and third floor.

The house has a wonderful history. The great thing is that it was saved.

First, I find the facade of this old hotel really impressive
But I didn't quite understand; since its restoration in 199 that it has become again. A hotel or museum?

ps: could you please give the google map link of the building location? I would like to go for a walk on the streets thousands and thousands of miles from home. Thank you

@yoshimiparis: It is both a hotel and a museum. The museum "items" are on the second and third floors in display cases.
Google Map location

How nice that here it seems the very opposite to the tear down culture of the west coast. Beautiful building and I love the wrought Iron arcade with the balconies above

This is a magnificent image of this very impressive building. 5*

A superb photo of this impressiv building !

A great looking buiding and history to go with it.

wonderful image!! And interesting history too:)

Certainly a grand point of view. How wonderful they are using it for hospitals now.

I am going to google this soon as I leave this comment...see if I can see some inside shots. It sure has a history!

Beautiful place with a history. I love the green shutters.

A beautiful old place. It's good that it was preserved and restored.

Isn't all that green lovely!

This has a New Orleans feel to it, Steven. Not sure I saw this building while there?

converting their empty rooms into rooms for COVID-19 patients....

Fine to see and trad over this historic building

In times of crisis, everything changes and adapts.
It's a beautiful building, with colors that cause visual impact.

A magnificent building with a lot of history. I am glad that it was preserved.

thank you for google map