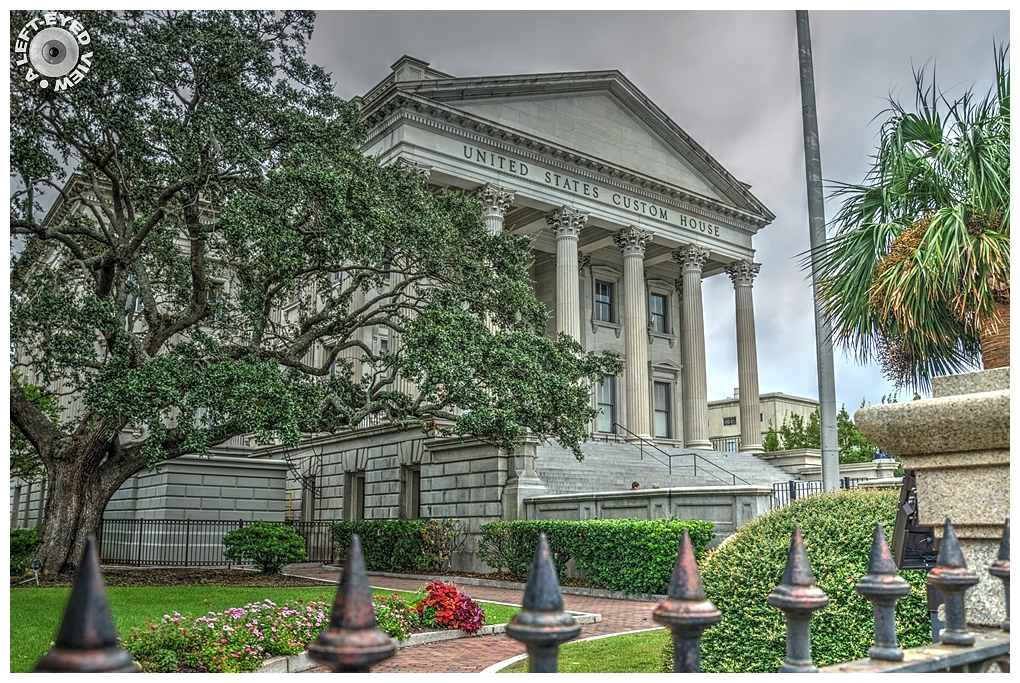 Posted by Steven (Chicagoland, United States) on 31 March 2020 in Architecture and Portfolio.

Construction began on the U.S. Custom House in 1853, but was interrupted in 1859 due to costs and the possibility of South Carolina's secession from the Union. After the Civil War, construction was restarted in 1870 and completed in 1879. The building was placed on the National Register of Historic Places on October 9, 1974.

Land was purchased at Fitzsimons' Wharf at East Bay and Market. Construction started in 1853. Since the location was marshy, 7,000 piles that were 40 ft long were driven into the sand and were cut off at grade. A grillage or network of timber was laid. and a thick bed of concrete was constructed for the foundation. The granite walls of the basement were finished by 1855. After the marble-faced walls were erected, the columns were begun in 1858.

During the war, the building was damaged by shelling. In 1870, construction resumed. The original marble came from Hastings, New York. Because that quarry was abandoned, new marble was obtained from Tuckahoe, New Jersey. Fluted Corinthian columns surround the iron second floor gallery. The gallery is ornamented with fluted pilasters.

The windows are rectangular with pediments. The portico entrance doors are also pedimented. The building was topped with an entablature with architrave and an unadorned frieze with a dentiled cornice. The building has a low roof with an open balustrade.

A superb image of this great building Steven. 5*

I wonder what it is about Greek Temple architecture that makes it such a favourite with Government buildings and banks :) Nicely captured

A great composition with excellent light and detail.

A fine picture of this famous place. Reading the history, it's a wonder it survived.

It sure has stood the test of time. This photo should be on a postcard.

LOvely piece of Architecture... Thank you for the History:)))))

The entrance is quite majestic and the building is well maintained.

A special and fantastic composition from this building .
Thanks for the interesting story.

You certainly have some grand buildings where you live, Steven

This is a magnificent building. It has quite a history. A beautiful composition.

A lovely capture of this beautiful old building.

ah, I thought you had moved up the coast. Fine shot of this elegant building.

Nice framing with the tree and fence.

such a painterly appeal

That tree on the left looks perfect for climbing.