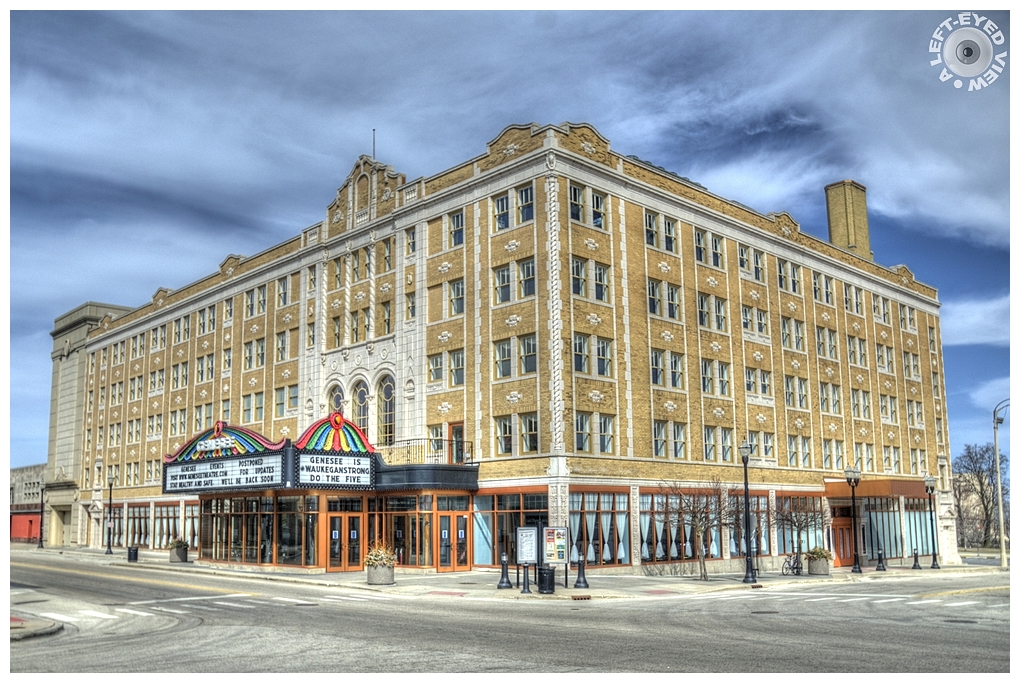 Posted by Steven (Chicagoland, United States) on 9 April 2020 in Business & Industry and Portfolio.

Located at a normally bustling corner, a temporarily closed Genesee Theatre in downtown Waukegan, Illinois hasn't had any acts, shows or musicals since mid-March due to the coronavirus pandemic. The theatre has cancelled all performances until at least May 1st; most likely to be extended if the pandemic does not subside.

The marquee reminds passersby to "Do the Five". Stay safe!

A 115,000 square-foot state of the art facility, the Genesee Theatre has expansive lobbies and lounges. And the stage size has been doubled and a balcony expansion has raised seating capacity to over 2,400, making the Genesee Theatre one of the largest facilities of its kind in the region. In addition, to ensure that there is no question to the splendor of this facility, a one-of-a-kind, 18 foot, Baccarat crystal chandelier has been added to the grand lobby. The chandelier, which originally hung in Seattle's Orpheum theatre, is valued at $350,000 and weighs 2,200 pounds, includes thousands of pieces of crystal and features gold-plated sconces. Kept in boxes since 1967, the chandelier was sold for only $100,000 to the Genesee Theatre by Mr. Louis Bianchi, and the remaining $250,000 was donated to the Genesee Theatre's renovation efforts.

The Genesee Theatre re-opened its doors on December 3, 2004 and will continue to provide the highest quality of performances including comedians, Broadway productions and national and regional musical acts.

It's anguishing this desertification!

This is a beautiful building, very chic! and the light is spectacular!

A superb image of this impressive building. 5*

well on the plus side it gives you an unobstructed view of the building :) From what I can gather it should be longer anyway. The virus hotspots seemed to be caused by people in close proximity at parties, football matches, etc. and I would think theatres would be the same. Nicely captured

Splendid composition of this building !! We hope that he returns to life soon...

That is an impressive theatre

It's a marvelous building. It's too bad that all activities have to cease for now.

Beautiful capture and a nice piece of info here. Hope people have started avoiding crowding...and are safe staying at home!!!Being alive is the sanest thing now!!!

That is a beautiful building...and looks so well built.

With so many windows, it's a building that looks more like a hotel than a theater...
But it is an imposing building.

A beautiful photo from this great theatre .
Thanks for the interesting information.
In the Netherlands are all the theatre closed . We hear 28 April the continuation of the rules.

What a grand looking building!

This is such an elegant looking building and so large. I can just imagine how beautiful it must be inside. That chandelier sounds amazing!

Beautiful theater. I'm sure it is a bustling and busy place in normal times.

a stately piece of architecture with an interesting history. I love small old theaters, so I read your account of the expansion with some dismay. We have season tickets to a small theater that was built in the 1920s for Vaudeville. It seats about 600, so there is not a bad seat in the house. We caught the premiere of "Steel Magnolias" on March 13 and performances were suspended as of March 14. The season is likely over.

Signs of the times, Steven! (sigh)

Yes, hard times for all of us. Very special buildung, looks nice.

What a beautiful building.
And yes, all culture stops almost everywhere !

A beautiful building with what sounds like a grand interior. Beautiful image.

How very cool that is!!

Beautiful building and fine architecture. Interesting information. Hope this will be busy again after the lockdown. :)

what a fine piece of architecture and you've photographed it beautifully

So many businesses are suffering right now.