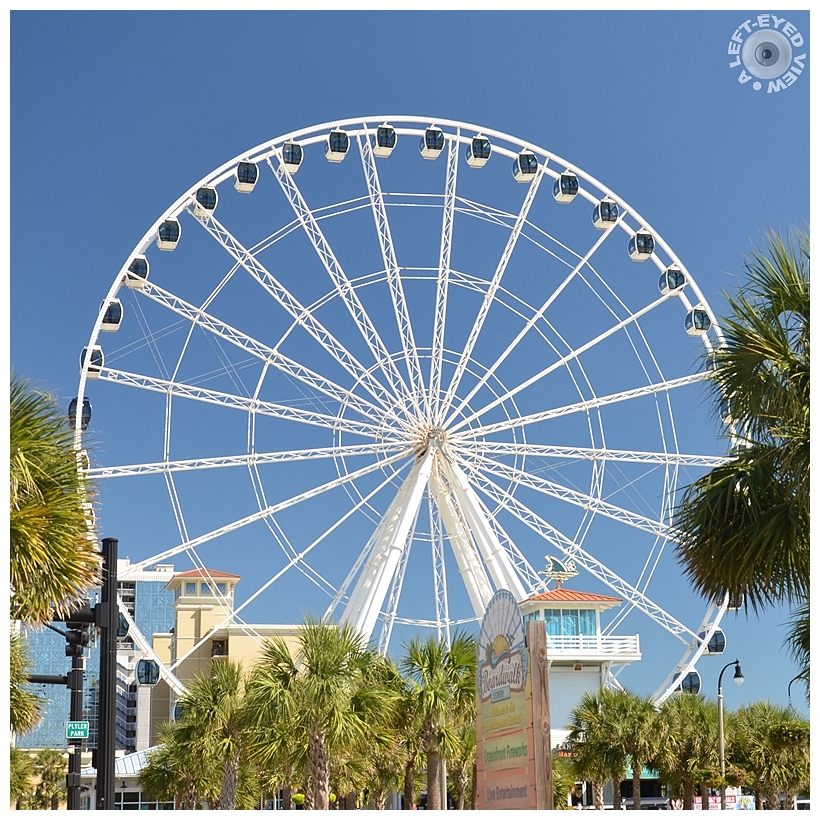 Posted by Steven (Chicagoland, United States) on 15 April 2020 in Sport & Recreation and Portfolio.

A great standout against the blue sky, the SkyWheel in Myrtle Beach, South Carolina rises high, providing great views of the Myrtle Beach strip. SkyWheel is a 187-foot tall (57.0 m) observation wheel in Myrtle Beach, South Carolina. When it opened on May 20th, 2011, it was the second-tallest extant Ferris wheel in North America, after the 212-foot (64.6 m) Texas Star in Dallas, and the tallest wheel in the United States east of the Mississippi River. Since its opening, it has become the sixth-tallest Ferris wheel in the United States.

It is very great device. Handsome

I declare, Steven. I have a sister who lives on the coast in Myrtle Beach about half of the year, and I bet she knows all about this. When I visited her years ago, it had not yet been built. It must be quite the attraction.

I love Ferris wheels, but nothing would get me on them. LOL!

Square pic with a circle inside... Perfect intuition.

Did you venture, Steven?

Great to see the whole skyweel in one image

The big wheel we had in Paris is 60 meters high; smaller therefore than this

The wheel is beautiful

I would have liked it when younger...now not so much.

Lovely image against the blue sky !!!!
But I get dizzy even looking at it !!

It's a fine ferris wheel that outgrew it's fame. Someone wll always made one bigger.

Beautiful composition with the wheel .

Oh how beautiful this is!

Similar to your signature! ;))

Who fantastic photo from the sky wheel.

The white wheel stands out brilliantly against the blue sky.

that is quite amazing

despite it being only a few hours from my home, I have never been to Myrtle Beach. I have been on the wheel on the Texas fairgrounds, but all you can see is Dallas. I bet (on a clear day) the view over the ocean would be great.

A wonderful view of this big wheel! Beautifully composed. I hope that you took a ride on it!

I never rode a ferris wheel .... my vertigo does not allow it.
:-D
Great framing and composition!

Ohhhh fun! And a great shot! With the tree framing and the blue sky - they could use it for their promotions!

It really does stand out against the blue sky.

@Jolanda: Thank you. I get it now.