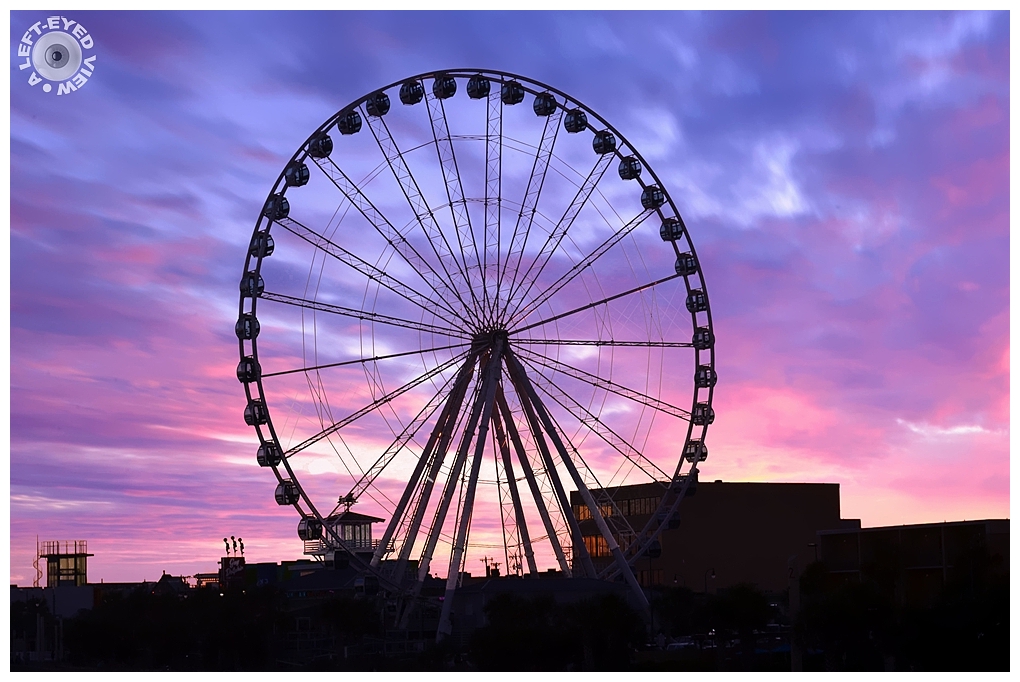 Posted by Steven (Chicagoland, United States) on 23 April 2020 in Sport & Recreation and Portfolio.

SkyWheel is a 187-foot tall (57.0 m) observation wheel in Myrtle Beach, South Carolina. When it opened on May 20th, 2011, it was the second-tallest extant Ferris wheel in North America, after the 212-foot (64.6 m) Texas Star in Dallas, and the tallest wheel in the United States east of the Mississippi River. Since its opening, it has become the sixth-tallest Ferris wheel in the United States.

Fine composition. Brings out the huge size of the bike well

Fantastic the wheel on the front to the gorgeous colorful sky .

Nice and moody in this twilight.

For some reason the words 'big wheel keeps on rolling' drifts into my mind :) A lovely semi silhouette

Good cityscape, the colors of the sky are very nice.

Not operating at the moment, I suppose.

A fine backlit picture of this ferris wheel. Impressive.

A gorgeous view of the Skywheel with the colorful sky behind it. A magnificent image.

That looks so good silhouetted against the dramatic sky

A beautifully colored sky behind that Ferris wheel...

Great sky to show off this Ferris Wheel.

The great wheel looks so good against the colorful evening sky. A gorgeous image.

Such a beautiful sky your wheel is silhouetted against! Very nice capture!

the beautiful sky highlights the shape of the silhouetted wheel

WOWSER, Steven. You sure caught it in the perfect light.

Wow. What can I say?
MAGNIFICENT. GREAT CAPTURE

What a beautiful sky behind the great wheel

Beautiful colors of the sky.
The silhouette (well... almost silhouette) of the wheel, it's very well highlighted.
A perfect moment to catch!

I notice your preference for circular shapes, like the white camellia of your previous photo ...
Compliments! ;))

Wonderful colours in these skies.

What a lovely photo. I cannot remember the last time I rode a ferris wheel.

such a beautiful silhouette

Great view of this SkyWheel and a beautiful sky in the background. Superb. :)