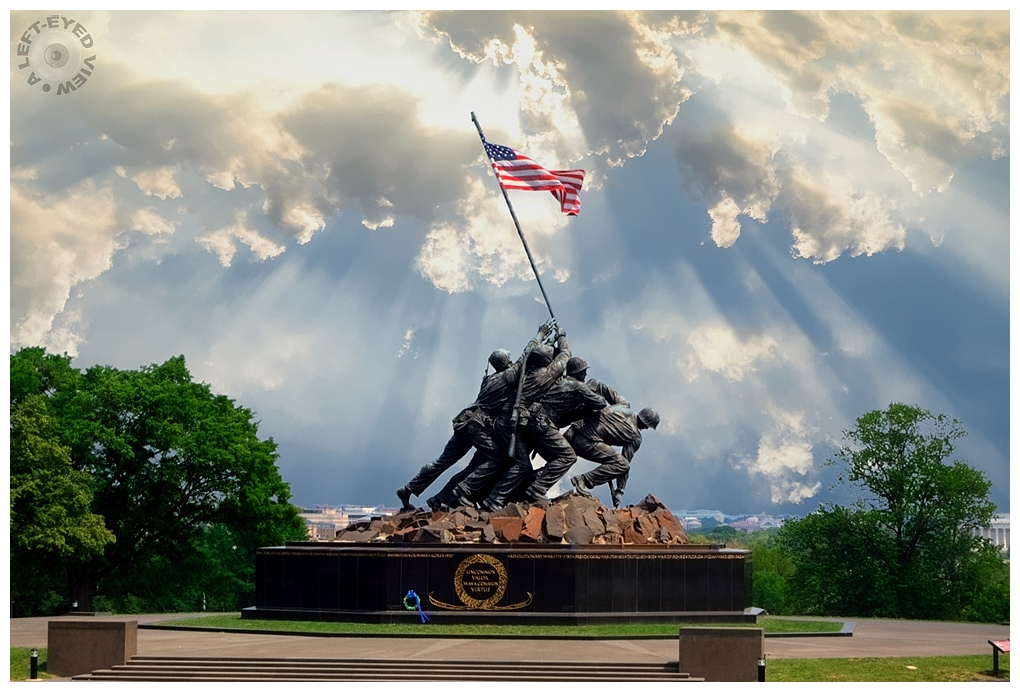 Posted by Steven (Chicagoland, United States) on 25 May 2020 in Landscape & Rural and Portfolio.

The following was taken from Panel 4 of 4 at the Site of the Memorial:

It was then proposed that the symbolic scene be immortalized in bronze. The Marine Corps Memorial Foundation organized the fundraising and creation of the monument. After years of effort, Felix de Weldon and his assistants completed the statue...."

Regardless of what angle this memorial was photographed, I found it to be just as powerful as the last, revealing faces, emotions, and struggle. Posted for those who made the ultimate sacrifice.

One of America's most significant "icons," Steven! Do stay safe and healthy however or wherever you celebrate this day.

The movement and drama in this sculpture is palpable, Steven

A magnificent image to remember those who never returned. 5*

Wow didn't the sun and clouds cooperate beautifully for you. Wonderful image and sculpture from a classic photograph

Beautiful with the sun's rays just in the right place.
Good Memorial Day

A fantastically beautiful photo of the statue.
Our king laid a wreath on Margraten yesterday and commemorated the fallen.
Warm greetings from the Netherlands.

The light is amazing in this shot. Perfect image for Memorial Day today. 5*

Lovely sculpture and the sky above! Love the clouds and the rays streaming through!! Fabulous short...
and thank you for the mote :))))

The centerpiece of the memorial is a colossal sculpture group depicting the six Marines who raised the second and largest of two U.S. flags that were both raised atop Mount Suribachi located at the south end of Iwo Jima, on February 23, 1945. The first flag flown over the mountain was regarded to be too small to be seen by all the American troops on the other side of it where most of the fighting would take place, so it was replaced by a larger flag.

Dramatic view, and story behind that.

@omar: Thank you for this great addition of information!

Superb with this sky, great tribute !

Thank you for this tribute image today

Congratulations on the Spotlight.

Thank you for posting this beautiful photo of such an iconic and powerful memorial.

Congratulations on your SPOTLIGHT! well deserved

The original photo of Iwo Jima is an historical photo both by its location and constraint and by its international recognition and diffusion.
Yours at this memorial is much more peaceful and it would be nice to have only quiet photos like yours and no more war photos!
Nice tribute.

@Jean-Luc.M: Thank you! I share your sentiments for no more war photos.

A great image for this day.

Congratulations on the spotlight.

Interesting history of this model and its final success.

That is a powerful image. Very well shot.

yes, the statue is powerful, and the sun rays you captured add to the power of the image.

Congratulations on the Spotlight Steven! This is a gorgeous image. I love the rays of light. A wonderful tribute. This is probably my most favorite memorial in Washington, DC. I always find it inspiring every time I pass by it.

One of the most famous "scenes" in world history.

And congrats for this Spotlight !!

Time passes quickly. And the older we get, the faster it seems to pass...

Gorgeous photo. The effect caused by the rays of light is sublime.
Wonderful capture.

Wow. Amazing. Glorious presentation of this memorial. Excellent.
Congratulations on your spotlight. :)

Beautiful composition . Congratulations on your Spotlight !

very fitting and wow, on that sky!

Congrats on the Spotlight Steven !

Excellent dramatic presentation of the monument. Congratulations on your Spotlight!

That is really a special moment with the rays of light shining down.

oh wow, perfect sky to have been there at that moment! Great photo.