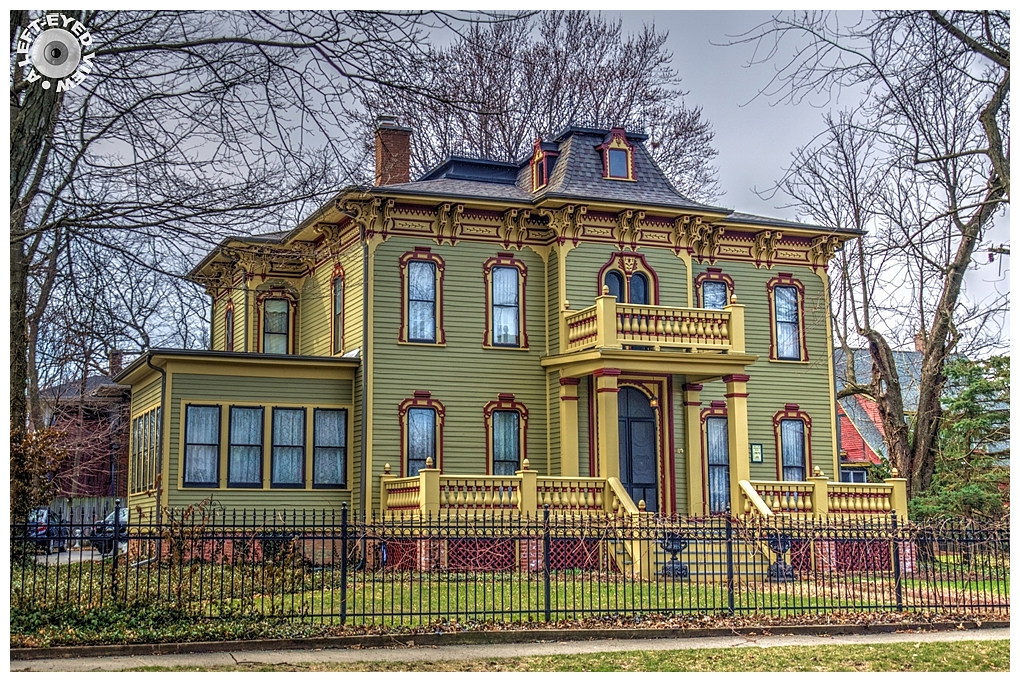 Posted by Steven (Chicagoland, United States) on 1 June 2020 in Architecture and Portfolio.

This Italian-style home was built in 1872 at a cost of $4,500 for Warren H. Ellis. Former Waukegan mayor Fred Buck acquired the house in 1919, who added the south-facing sun porch from which he could view his orchards. In 1976, the house was designated one of 27 Bicentennial landmarks in the city, and in 1978, it was listed as a contributing structure to the Near North Historic District when it was listed on the National Register of Historic Places. The current owners acquired the house in May 2002.

Prominent features of the exterior include the elaborate bracketed cornice, intricate window surrounds, ten-foot high double-entry doors, and the center turret with concave Mansard roof. The Chicago Paint and Coatings Association recognized the authentic Victorian paint scheme with an award in 2006. The interior has been faithfully restored by the current owners and furnished with their collection of Victorian antiques. One of the most interesting features of the house is the authentic Victorian-era kitchen complete with beadboard wainscoting and two wood-burning stoves.

The style is really astonishing for this big building of which you made a very beautiful photo.

Oh my, Steven. What fabulous colors for this grand beauty!

It's so well accented isn't it with the trimmings.

Oh what a wonderful place and editing

A great look at this magnificent house Steven.

What a beauty! I love everything about it. So much to see!

Beautiful old house. So much character. New ones don't have it.

wow..what a fabulous house Steven !! So many lovely glass windows !!!!And thank you for all this information...

A magnificent house with beautiful architectural design. A fine shot and interesting information. :)

Superb house and a good treatment with details and colors !

An elegant home with notable style.

You have captured the lines and colors so beautifully

that doesn't seem like near enough the amount of money for the build. it's quite exquisite and wonderful that it's maintained so well.

That sure is an impressive structure.

wow - impressively crisp and colorful, this is a delightful historical architectural shot

This is just stunning. I love the architecture, the style and the color. A magnificent home. It has been lovingly cared for all these years.

It's a house with a color, or mixture of colors, something out of the ordinary. But visually it works very well.
Great capture.

Wow what a beautiful house! I love how it's been taken care of!