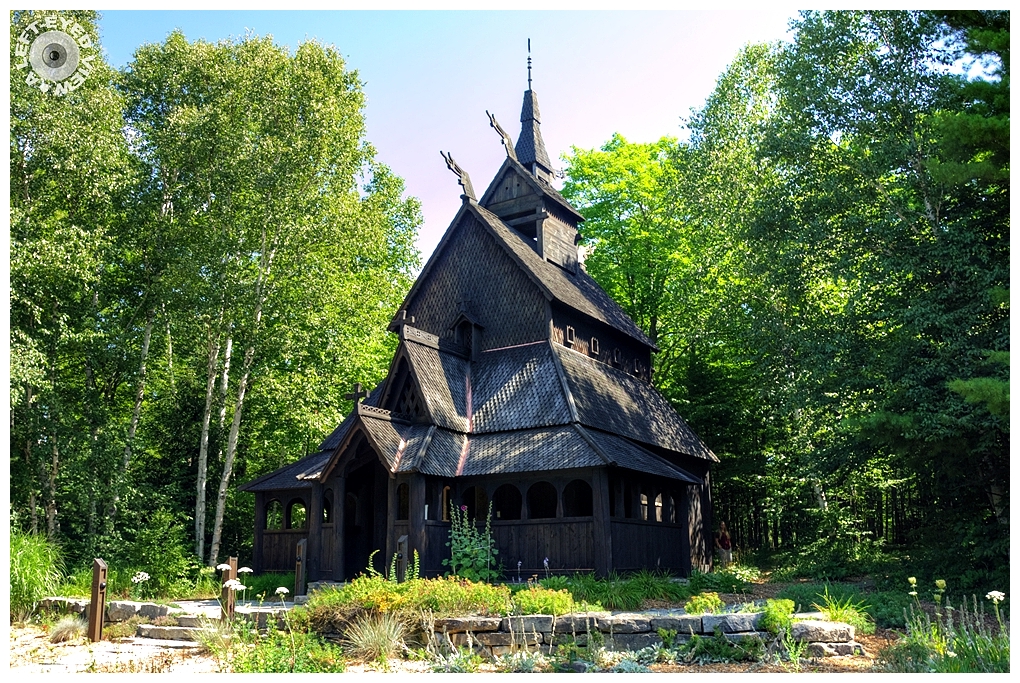 Posted by Steven (Chicagoland, United States) on 22 September 2020 in Architecture and Portfolio.

Washington Island Stavkirke is a Stave Church located in Washington Island, Wisconsin. It is owned and operated by Trinity Evangelical Lutheran Church and is positioned a few hundred yards away from it.

The volunteer-led construction of the church began in 1983 and was modeled after the Borgund Stave Church built in 1150 Borgund, Lærdal, Norway. It was created to reflect the Scandinavian heritage of Washington Island and was originally proposed by James Reiff, who was the acting pastor of Trinity Evangelical Lutheran church from 1978–1985. The building has twelve 18-foot masts all harvested locally from Washington Island. Eleven of the masts are Pine and one is White Fir. There are 9,600 four-inch wide shingles that make up the six-tiered roof of the Stavkirke. The church was completed and dedicated in the summer of 1995.

Around 5,000 people visit the Stavkirke annually. During the summer, there is a weekly Wednesday service that is held in the building. Both weddings and baptisms are held at the building through requests.

We were unable to enter the church at the time that we were there.

This photo reminds me of the churches and houses I saw in Russia in a pretty village called Kizhi. The architecture of this village is very close to your photo Steven.

Great church. It is very interesting to see that it follows the Nordic traditions

Superb ! we can see similar churches in Norway !

A superb composition, the architecture is superb! I've seen some of these in Norway!

what a shame you couldn't go in, but a lovely capture of this beautiful timber frame building in rather difficult lighting conditions

Oh, this is really gorgeous !

Beautiful photo of this church !

Interesting replacement of this Scandinavian church.

Wonderful and unique architectural beauty!! Like a Church in a Fairy Land !!
Pity, you could not go inside and we are the losers as we are missing the images you would hve taken there !

It looks like something from a fairy story. It is wonderful. If I can remember, I want to google it...

That is one beautiful building, Steven

A very special church with the green nature around the building .
A lovely picture .

Beautiful church. I got to see one of these years ago in a history park in Norway.

A church with lovely architecture.
And the surroundings where it's inserted is luxurious.
Awesome place.

A fine picture of this remakable building. The backgrond is amazing.

This is such a beautiful church. The architecture is gorgeous. Almost something out of a fairy tale! A beautiful image.

What an amazing structure!!! Great shot!

Good photo of the church with its fine architecture. Thank you for the background info too, as I was wondering how did a church like that end up on Washington Island. Very interesting!

A fine shot of this beautiful Church. Amazing architecture. And interesting information. Thank you. :)