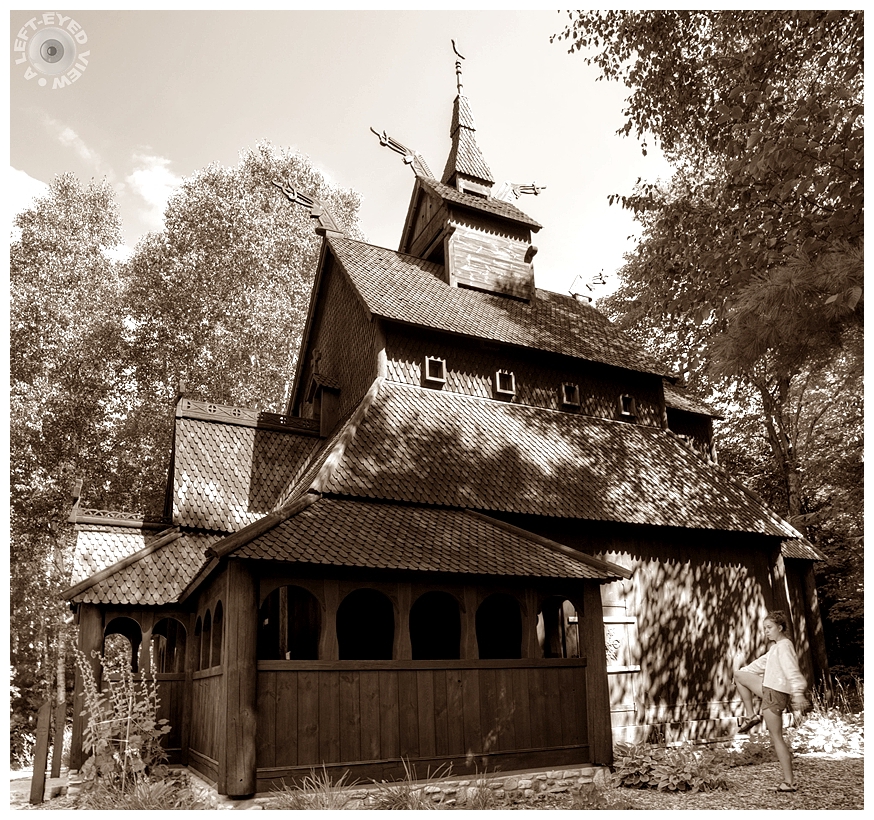 Posted by Steven (Chicagoland, United States) on 30 September 2020 in Architecture and Portfolio.

Washington Island Stavkirke is a Stave Church located in Washington Island, Wisconsin. It is owned and operated by Trinity Evangelical Lutheran Church and is positioned a few hundred yards away from it.
In this second shot, I wanted to show more detail in the architecture and the ornamentation at the top of the gable roofs. The volunteer-led construction of the church began in 1983 and was modeled after the Borgund Stave Church built in 1150 Borgund, Lærdal, Norway. It was created to reflect the Scandinavian heritage of Washington Island and was originally proposed by James Reiff, who was the acting pastor of Trinity Evangelical Lutheran church from 1978–1985. The building has twelve 18-foot masts all harvested locally from Washington Island. Eleven of the masts are Pine and one is White Fir. There are 9,600 four-inch wide shingles that make up the six-tiered roof of the Stavkirke. The church was completed and dedicated in the summer of 1995.

Around 5,000 people visit the Stavkirke annually. During the summer, there is a weekly Wednesday service that is held in the building. Both weddings and baptisms are held at the building through requests.

We were unable to enter the church at the time that we were there.

This wooden church has a lot of charm and I like the simplicity far from the pomp of some others. Nice sepia process

The roof is very interesting. Judging from the photos, the new continent prefers complex roofs in houses. They feel like it’s not easy to get them to hold the rain.

Because I have seen stave churches in Norway, Steven, I am thrilled to see this from you in America, of all places. YAY.

It's good to see more detail in this unusual church, Steven

another nice capture of this excellent vernacular architecture. Beautiful woodwork and the girl exercising is a nice surreal touch

Excellent image Steven and I love the treatment. 5*

I so love this! Of all the photos I saw when I googled it, this just might be my favorite.

The architecture of the church is special .
I like the color conversion very much .
And thanks for the interesting information.

Indeed this is a real stavkirke

Great job on the photo...

A fine picture of this great building. Style is wonderful.

Wonderful image of the superb church in sun and shadow .

But for that Cross at the top, one could never imagine that this is a Church!
Brilliant capture Steven...and thank you for the info :))

I have never seen such a church before! What a beauty! Thanks for this photo!

The Stave Church is really beautiful.

Beautiful vintage mood with this mono !

Very suitable tones for that building.

I like the conversion to sepia. The shadows gained prominence.
Very beautiful capture!

Completly another timeless look in this monochrome tonings.

Very nice processing on this building

A very nice shot of that unusual building. The girl adds a nice perspective.

a well executed stitch. I read carefully, expecting some comment about the unusual posture of your model.

A beautiful image. This church is really beautiful. I love the architecture.

A great capture of this old Church. Beautiful architecture and lovely details. Superb. :)