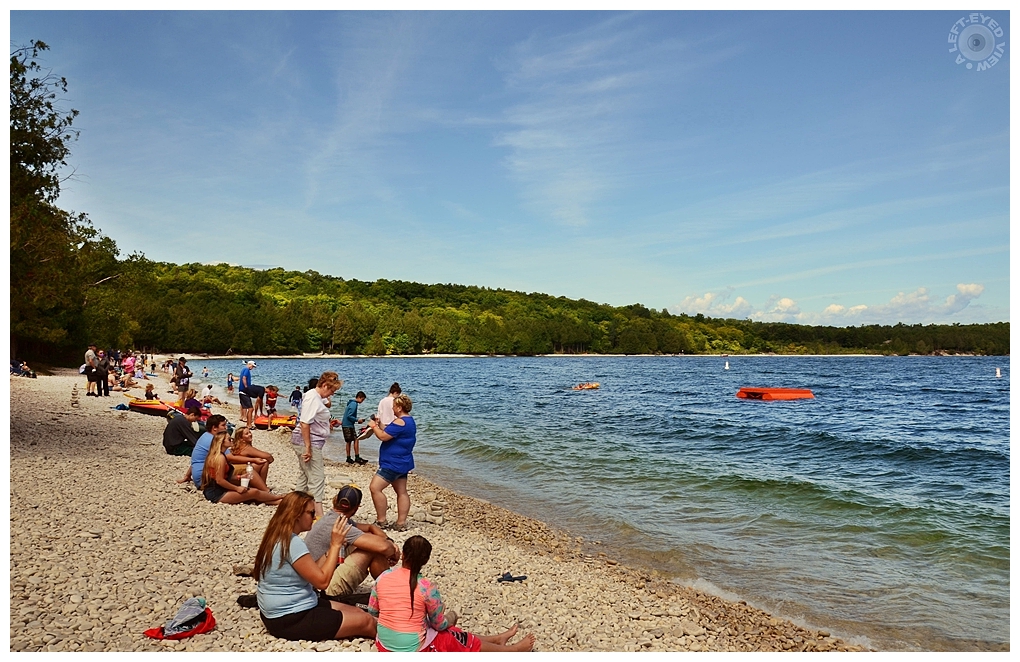 Posted by Steven (Chicagoland, United States) on 9 November 2020 in Landscape & Rural and Portfolio.

Schoolhouse Beach is the perfect spot for people who don’t like getting sand in their bathing suits. Located on Wisconsin’s isolated Washington Island, and one of only five similar sandless beaches worldwide, the shore is named for a one-room wooden schoolhouse that used to exist nearby but which has since been replaced by a picnic table and barbecue area. The small rocks were glacier-polished over thousands of years and are each small geological treasures.

Most visitors come simply to swim in the clear water and sunbathe, but people often build cairns and other peculiar sculptures with the stones. When they aren’t trying to skip them along the surface of the water, that is.

We were on a tour of the island, so this photo was not taken as we recreationed on the beach. It was a 10- minute stop. We looked out of place fully clothed and masked. While it doesn't look like it from this PoV, the beach-goers attended in family groups and were separated by six feet or more.

I see a lot of people and few people protected from the virus... but what a beautiful beach and colours!

There's a beach on Catalina Island, Steven, where we visited sometimes 2 or 3 times a year when the kids were young, that you never knew if it would be like this, with only stones/small rocks, or nice sand. So I know what it feels like. Not easy to walk on. But what a beautiful scene!

Perhaps it was a bit chilly that day? Not much swimming!

Very nice, beautiful and inviting overview
Yes, you do not suffer from sand, but it is hard !!

Asuperb composition for this interesting place .

A beautiful place to be , but you need special shoes for the stones .
Gorgeous photo .

What a lovely spot to relax.

i thought the capture date would be different.

I would be skipping rocks...

Looks for a good place in summerdays.

It looks like a very attractive beach and area. Too bad the old school house is gone.

A very nicely composed shot.
The stones must get a little warm on a hot sunny day. Toast your buns?

I have "intruded" on scenes like this while carrying my camera from time to time. Yes, it can be awkward. That far north in Wisconsin, I'll bet this shot was taken months ago!

Isn't that wonderful! What a nice scene!

This is such a beautiful scene. I love how the trees seem to come right up to the water. It looks like a nice place to spend the day.

All beaches are always pleasant, with sand or without sand.
And this one, with all this green surroundings, is very beautiful.

I wonder when I will be able to visit the beach again.